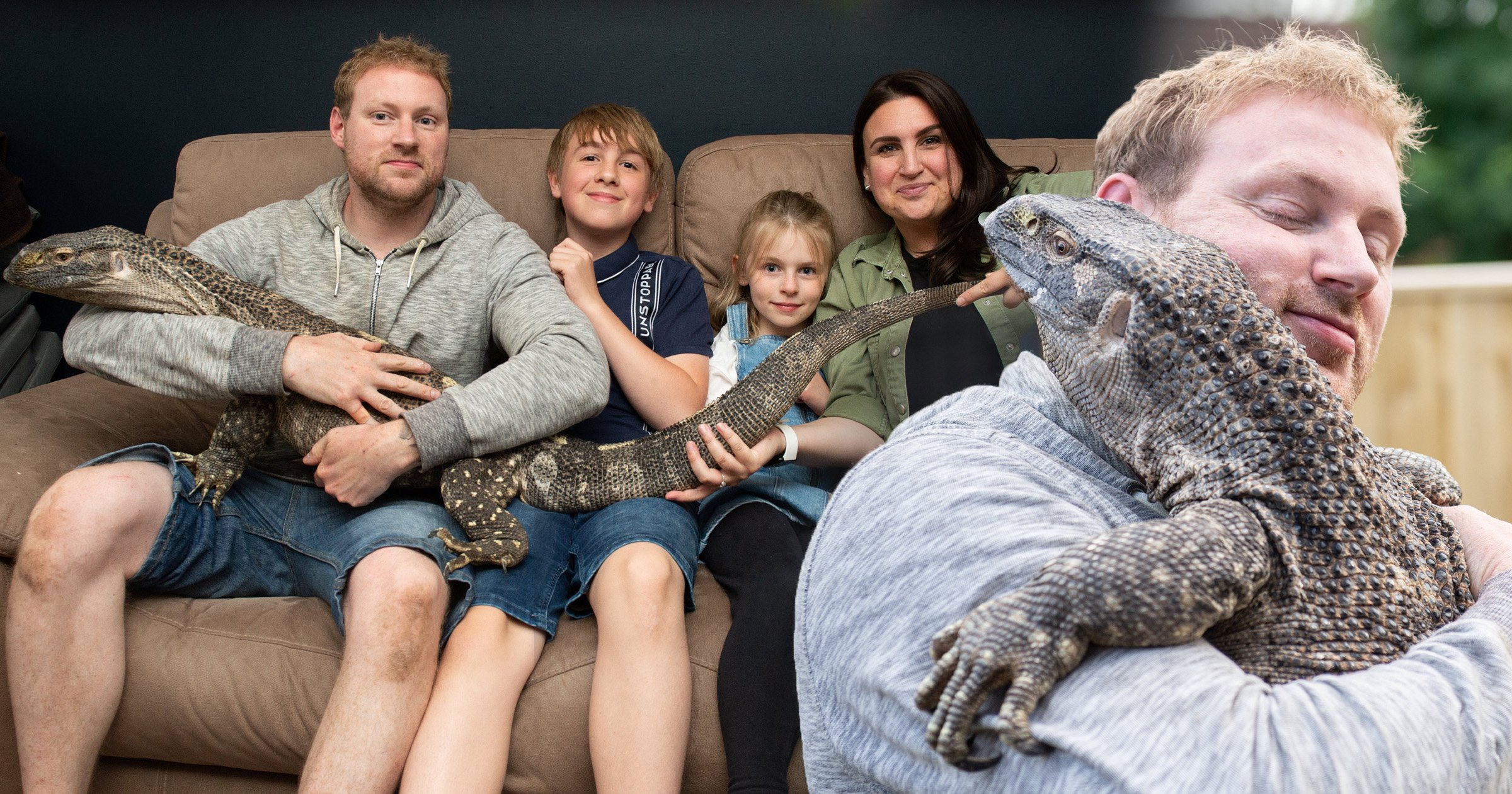 Say hello to Rex, a 40lb, six foot long monitor lizard that lives with a family of four in Andover, Hampshire.

Although he is not your usual house pet, Rex’s owner Matt Reid, 38, said he is more like a puppy than a reptile and loves ‘walkies’ on a lead.

Rex adores going for strolls with kids Leighton, 11, and Kailah, seven, and even enjoys sunbathing and going for weekly baths.

‘I look at Rex as a one in a million lizard,’ Matt said. ‘Rex has such a kind and docile personality, he loves his food, he loves basking in the sun and he loves his baths.

‘He has a bath every week and when he’s had enough he climbs out and brings himself downstairs.

‘He is, I suppose, quite intimidating to some people but to me he’s a puppy dog. 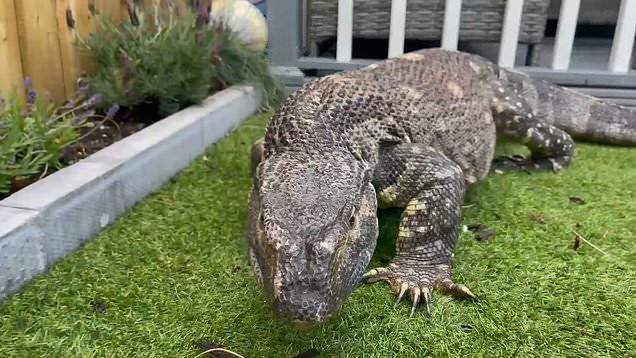 ‘When I get home from work he comes out and has full roam of the garden and house as he’s too big to be locked away.

‘If the weather is nice at the weekend I take him out for a walk on his lead for as far as he wants, there’s no walking Rex he goes where he wants! Rex gets big reactions when out and about, people either shocked, scared or interested.

‘People always stop to ask questions and take pictures, there’s never a dull moment when I take him out.’

He continued: ‘I’ve got to own my dream pet, to learn his ways and educate other people as well on these animals as they can be poorly portrayed.

‘He’s so rare and it’s like owning a mini modern day dinosaur!’

Matt, who is a paint sprayer, kept reptiles for 20 years but stopped when he and his wife Cordella, 36, had their first daughter.

However, Matt used his time in lockdown to build enclosures in the garden for future scaly pets. And so, Rex was adopted.

‘As soon as I saw Rex up for sale I didn’t hesitate as it has always been my dream to have a dog-size tame lizard around the house,’ he explained.

The journey to pick up Rex from Doncaster took 8 hours but Matt said it was worth it and Rex now lives a pampered life with their other exotic pets; two tarantulas, two chinchillas and a three-and-a-half foot tegu called Littlefoot.

Matt spends around £15 a week on Rex and his diet which consists of rats, rabbits, guinea pigs and chicks that are all kept in a purpose built freezer.

It’s fair to say the diet is working because Rex measures 28 inches around his body and seven inches round his forearms – the same as Matt’s wrists.

The reptile is also toilet trained.

‘When Rex wants to go in the garden to do his business he goes to the back door and scratches on it to be let out, he usually does his business in the same area of the garden,’ Matt explained.

‘I haven’t trained him to do much but he’s very intelligent and knows where his bed is and takes himself to bed when tired and had enough.’

Rex’s species originates in Tanzania but can be kept as a pet in the UK by experienced reptile handlers.

They can live up to 30 years and can reach 30kg in weight and seven feet long in adulthood.

Their strong bite releases a venom that can prevent blood clotting in humans and would require hospitalisation.

‘Rex is as docile as a pet can come, however he is a six foot, 40lb monitor lizard with one-inch claws and razor sharp teeth so I am always aware of this, especially when he’s around people he doesn’t know,’ Matt notes.

‘I watch him and read any signs of him feeling threatened or stressed,  he has never shown any.

‘His first sign of attack will be puffing up and hissing then he will whip you with his tail, biting you is his last thing.’

Send us an email at [email protected]