If Heather Mitchell ever doubted the ultimate quality of her acting, she need worry no more. Here’s a performance to live among the greats; to join Roy Dotrice’s Brief Lives on the even more exclusive list of great one-handers. Playwright Suzie Miller has gifted Mitchell a role demanding superlative virtuosity that’s never gratuitous. She asks the actor to breathe life into not only Ruth Bader Ginsburg, the brilliant, noble, moral Justice of the fractious US Supreme Court, but also several pivotal men around her. 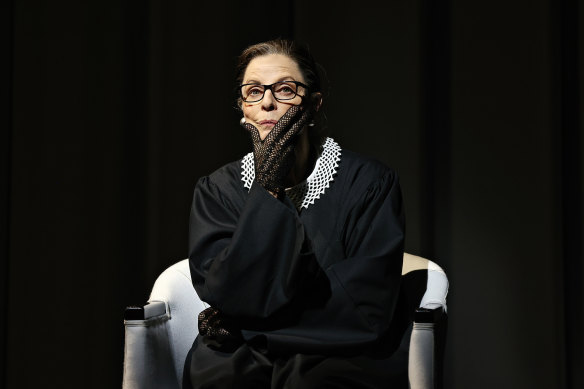 Heather Mitchell delivers a performance to live among the greats.Credit:Prudence Upton

Miller further asks Mitchell to represent Ginsburg across her life, from an excited 11 to a dying 82 (during the 2020 presidential election campaign), and every atom of the actor’s body seems to change in doing this. In fact, Mitchell answers every call upon her art with such poise, beauty, humour, insight and intelligence as brings tears to the eyes of even this dry old critic.

The play’s an equally mighty creation. Miller, writer of the widely acclaimed Prima Facie, now ingeniously sculpts visions of Ginsburg that flit between times in her life with ultimate fluidity, while connecting dots in her story much as lines are drawn between stars in the sky to make a bear or emu. One-handers are fiendishly challenging, given their tendency towards exposition rather than action, but Miller constantly puts us in the moment, rather than having her protagonist remember assorted pasts.

The real Ginsburg’s place in history is already assured, her scalpel-like mind slicing into the finest tissue of the law to win cases that eroded gender discrimination. If she was not infallible – she spoke out against Trump in 2016, despite vehemently championing the separation of powers between government and judiciary – her instincts for a more just society were always sound.

Miller dwells on Ginsburg’s love of opera, and Priscilla Jackman’s production (for Sydney Theatre Company) both foregrounds and backgrounds this music, helping build a Ginsburg who’s as culturally rounded as she is intellectually and morally. The 16-year-old Ruth is given a ticket to Turandot as a birthday present, and we share her experience of being overwhelmed by Nessun Dorma, making her yearn to be an opera singer – yearn to use her voice, which is, of course, exactly what she does in the law.

The play’s first part is primarily set in 1993, when Ginsburg awaits the call from Clinton to confirm her appointment to the Supreme Court. Into that eternal wait, while the president watches basketball, other scenes and phases are squeezed, as when she meets her soon-to-be husband, Marty, loses her mother, and struggles to get a job as a lawyer because, despite tying for first in her class, she’s a woman, a mother and Jewish.

Mitchell’s mimicry of Clinton is eerily and hilariously accurate, and the moment when he finally confirms her appointment is surprisingly moving, given we know it’s coming. Mitchell also variously depicts Marty, conservative Supreme Court Justice Antonin Scalia, Obama (at first a weaker link) and a deliciously caricatured Trump.

Jackman realises the script’s fluidity, without any self-conscious movement about the stage, and meanwhile the play delves into pivotal cases and into the issue of whether Ginsburg should have stood down while Obama was still in power. By the end, not only has our admiration for RGB soared but Mitchell, Miller, Jackman, designer David Fleischer, lighting designer Alexander Berlage and composer/sound designer Paul Charlier have all excelled in helping make her wisdom engrave itself on our souls.