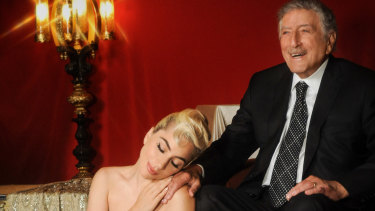 Lady Gaga worships at the shrine of one of her idols, Tony Bennett.Credit:Kelsey Bennett.

Tony Bennett and Lady Gaga would make good poker players. By waiting seven years to record their second album together, they also waited until Bennett was 94 (he’s since turned 95). Think about that for a moment. The credulity-defying achievement of still having a voice that can pitch and hold notes at that age is the ultimate proof of what a technically expert singer he’s always been.

The pair share a playfulness that keeps their duetting buoyant across most of this Cole Porter tribute. During I Get a Kick Out of You, for instance, after Bennett delivers the line, “I suddenly turn and see your fabulous face”, you hear Gaga say off-mic, “You talking about me?“, and then hear smiles infuse their subsequent singing. There’s also a genuine panache to the way their voices interact on Dream Dancing with You and the inevitable I’ve Got You under My Skin (given the full big-band treatment, with Gaga in barnstorming form).

As we already knew, she can be completely convincing in this idiom that blurs jazz singing and crooning, and their voices blend like two horns: hers having a slightly brassy quality that she can tame to prettiness, and his a rasp he can disguise with a bronze veneer.

The low point is Gaga’s solo rendition of Do I Love You?, which wades into a quicksand of sticky strings and loses itself there. By contrast, Bennett’s first solo, So in Love, is among the highlights, his performance swathed in on-mic intimacy and an arrangement that underscores the song’s drama, without adding bombast. Meanwhile, he gives a masterclass in how to paper over the cracks in his range, judiciously speaking an occasional word that only compounds the emotional impact, and on a swinging Just One of Those Things he could be 64 rather than 94.

Where Bennett underplays (partly from necessity), Gaga likes to overplay, so their performances meet somewhere in the middle, her theatricality flirting with his restraint. She’s wonderful on her other solo, Let’s Do It: sassy and funny as she lets her voice off the leash. Sometimes she sounds like Ella Fitzgerald and sometimes like Judy Garland – which is weird, given those two greats were polar opposites in timbre and phrasing.

It’s in the public domain that Bennett has Alzheimer’s disease, and this will be his last record. He goes out on a high. JOHN SHAND

Nick Allbrook, the leader of Fremantle five-piece Pond, recently said that after three albums of “pretty polished psych-pop” the band felt they’d “earned the reward of doing something completely f—ed”. If their ninth album is the sound of something “completely f—ed”, then keep it coming. It’s both defiantly Australian and ambitiously international. Human Touch is stacked with a Tubeway Army of synths, as Allbrook relates the tale of encountering a woman “talking at the speed of ice as I emptied my organic waste”. America’s Cup is limber funk-pop that shakes its skinny hips like the little purple guy from Minneapolis, while lyrically elbowing the ribs of a city that changed after it won a trophy in a boat race in 1983. And Toast is of a piece with it, a sparkling slice of yacht-pop that takes pot-shots at the wealth divide in WA. There are also echoes of Happy Mondays (Pink Lunettes) and Big Audio Dynamite (Rambo), and, like those bands, Pond straddles the dance-club and the rock festival stage. They share members and an aesthetic with Tame Impala, and sometimes they have laboured in that band’s shadow. But number nine is a charm. They should keep f—cking things up. BARRY DIVOLA

Ministry continue to defend their realty at the junction between shredding metal guitars and industrial electronica. Singer Al Jourgensen and his cohort staked their claim to it over 30 years ago, and albums including The Mind Is A Terrible Thing and Filth Pig earned them a cult following. Jourgensen’s 18-year heroin addiction had often threatened to derail the band, but now, after 17 years of sobriety, he’s in fine fettle on the band’s 15th album. There’s a palpable sense of urgency and frustration over these 10 tracks, recorded at Jourgensen’s Los Angeles home studio. On opener Alert Level a disembodied voice repeatedly asks, “How concerned are you?” Greed, fake news and corruption fuel the lyrics, and he calls for confrontation on We Shall Resist. Jourgensen’s hoary voice sounds freshly risen from the crypt, particularly on the gothic-horror cover of The Stooges’ Search and Destroy, transforming the once sinuous punk anthem into a malevolent, churning industrial-rock beast. After guitarist Mike Scaccia passed in 2012, there was a period of mourning before 2018’s AmeriKKKant, a scathing depiction of Trump-run America, doomed to destruct. Moral Hygiene is less furious – even hopeful. CAT WOODS