Hollywood’s newest IT girl! How model musician Charlotte Lawrence, 21, daughter of Scrubs creator Bill Lawrence, has gone from ‘jam sessions’ at 13 to holidays with Elton John and parties with BFF Kaia Gerber

She’s been spotted living it up with Elton John and David Furnish and her boyfriend Andrew Watt in St Tropez in recent weeks.

But it’s far from the first time that model and songstress Charlotte Lawrence, 21, has brushed shoulders with some of the world’s biggest celebrities.

The rising star is the daughter of producer/screenwriter/director Bill Lawrence, who created Scrubs, and actress Christa Miller, who starred on the series as Jordan Sullivan.

She also has a host of cool Hollywood pals, including BFF Kaia Gerber, who is herself the daughter of 1990s Supermodel Cindy Crawford and businessman Rande Gerber, and Kit Keenan, the Bachelor star and daughter of Cynthia Rowley.

The model, who has been signed to IMG for years, also has a blossoming music career, with 3.2 million monthly listeners on Spotify. 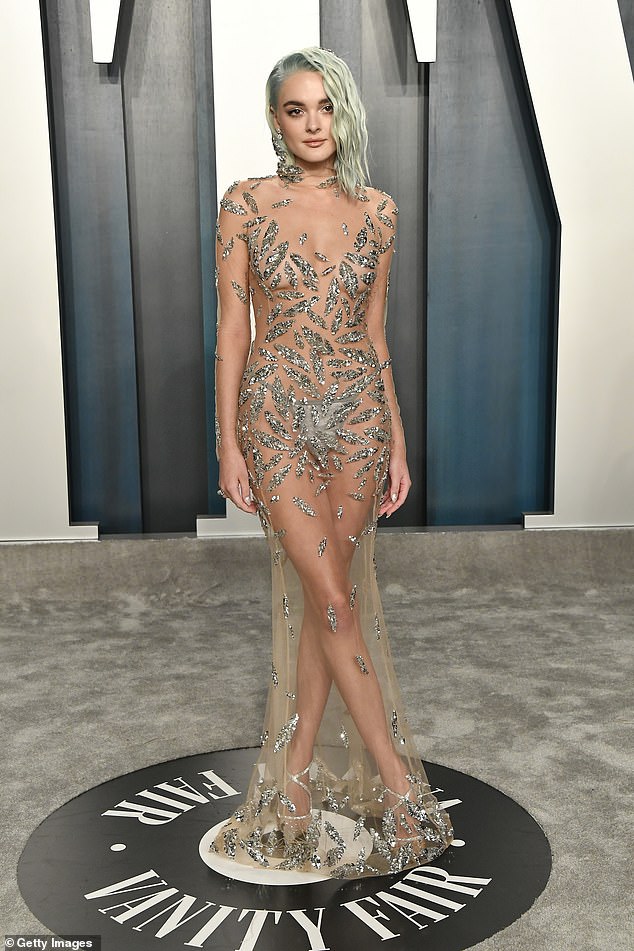 From holidaying with Elton John’s family to hanging out with Kaia Gerber, the daughter of Scrubs creator Bill Lawrence and actress Christa Miller, Charlotte Lawrence, 21, has risen to the top of the social pack 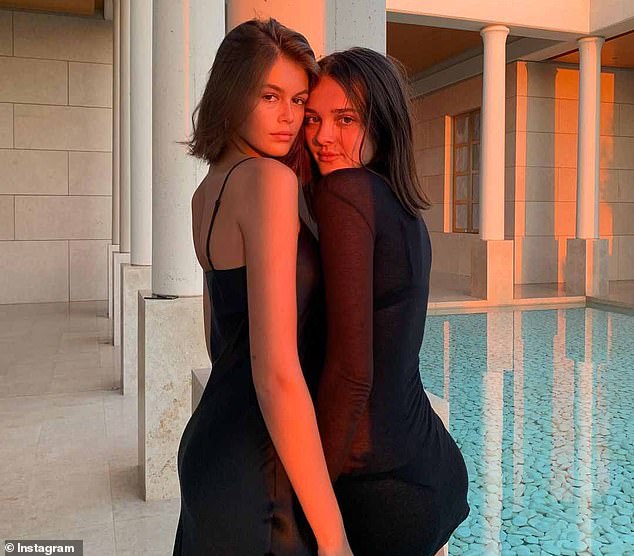 Meanwhile Charlotte also has a host of cool Hollywood pals, including BFF Kaia Gerber, who is herself the daughter of 1990s Supermodel Cindy Crawford and businessman Rande Gerber 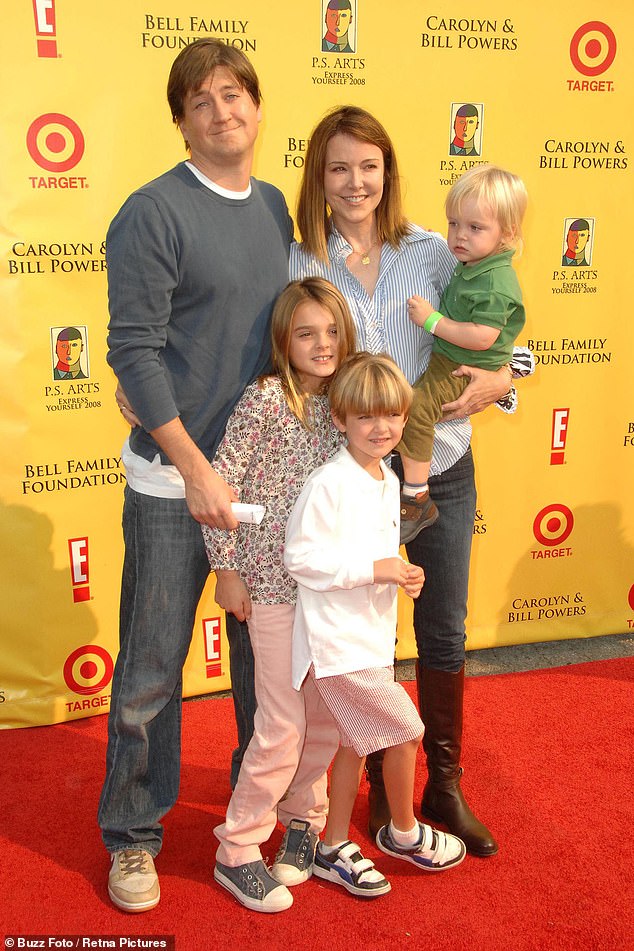 The rising singer is the daughter of producer/screenwriter/director Bill, who created Scrubs, and actress Christa, who starred on the series as Jordan Sullivan (pictured with her parents and brothers William and Henry in 2008) 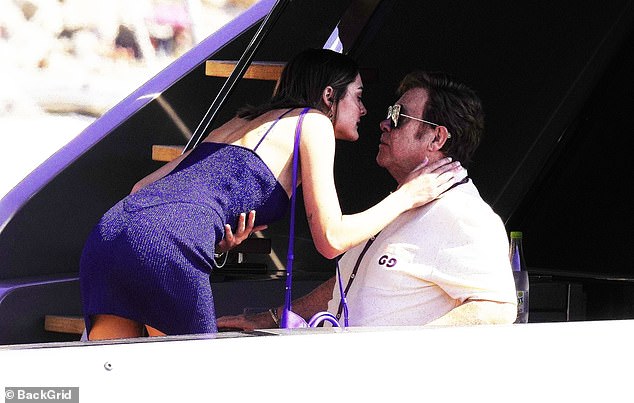 In recent weeks, Charlotte has been spotted living it up with Elton John and David Furnish and her boyfriend Andrew Watt in St Tropez (pictured) 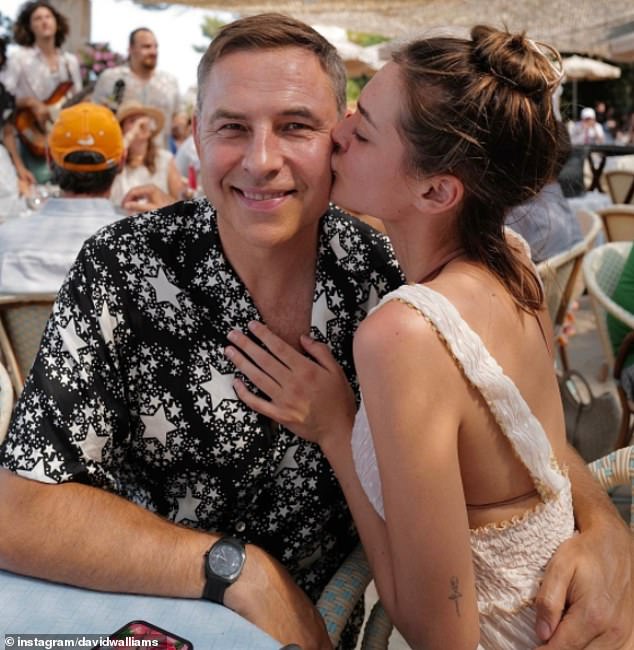 Meanwhile her mother is Christa is also an actress, who has appeared on The Drew Carey Show, Scrubs, Seinfeld, The Fresh Prince Of Bel-Air, Cougar Town and CSI: Miami.

The pair met in May 1998, at an ABC party in the Mercer Hotel in SoHo, before marrying just months later in December.

Charlotte was born and grew up in Los Angeles, the oldest of three siblings and grew up alongside her young brothers William, 18, and Henry, 14.

And while Charlotte always planned to go into showbusiness, she has moved away from the family business of acting.

She began singing as a five-year-old and starting playing the piano as a child. 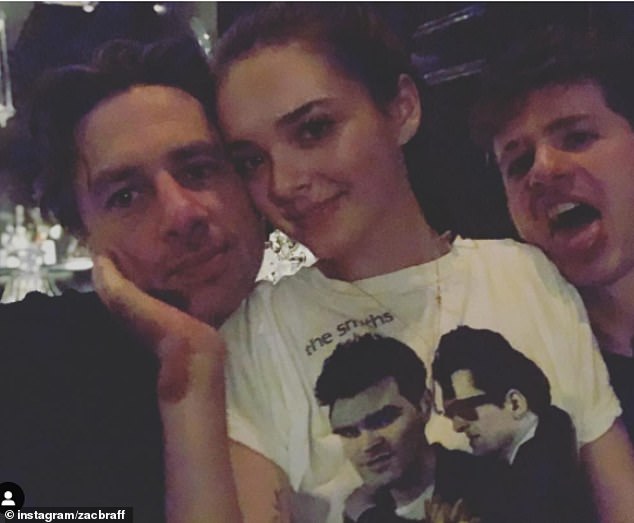 The 21-year-old remains close to the cast of the TV shows, including Zac Braff, who has called Charlotte his ‘pseudo-niece’ 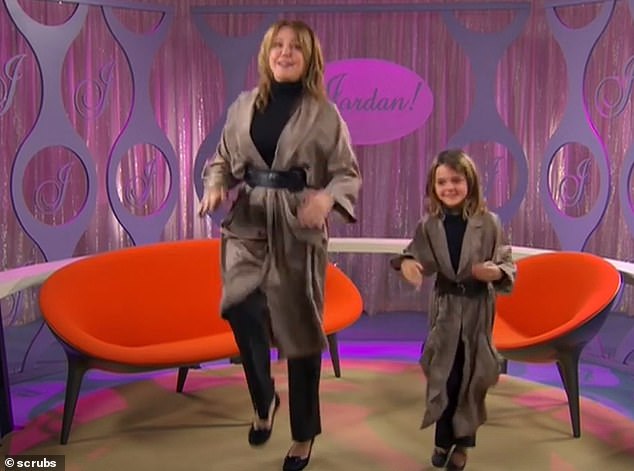 Charlotte even made a guest appearance in one of the episodes of the show alongside her mother, who played Dr Cox’s ex-wife Jordan (pictured) 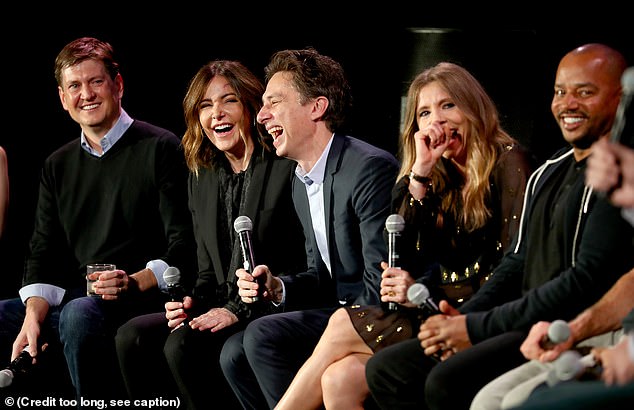 Charlotte’s parents Bill and Christa met in 1998 and married months later, before working together on the hit TV series Scrubs (pictured with other members of the cast)

She even appeared in an episode of season six of Scrubs, in which she could be seen performing a dance routine alongside her mother Christa.

Despite her parent’s having few music skills themselves, she has cited her father Bill’s music taste as one of the greatest influences on her own work.

She explained to W magazine: ‘I started writing poetry when I was like 10 or 11, and then started going into actual sessions, working with producers and songwriters and going out of my comfort zone when I was like 12 or 13.’

Christa would host Sunday jam sessions for the family’s Grammy-winning friends, with the singer telling Vanity Fair: ‘At 13, I played for my music idols and worked hard until I was confident that this wasn’t just a hobby.’

She attended the elite Marymount High School in Los Angeles, where tuition costs $54,000 per year and fellow alumni include the Kardashians. 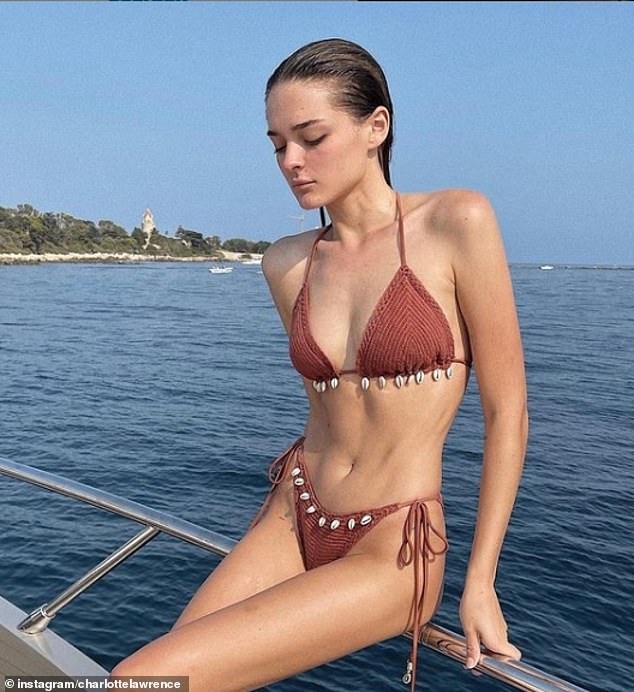 There she was a member of volleyball and basketball teams.

Meanwhile she has also been signed to IMG Models ‘since she was little’ and has appeared in magazines such as Teen Vogue and Harper’s Bazaar.

And although she has had a privileged upbringing, Charlotte insisted her parents have installed an ‘insane’ work ethic in her.

She told Wonderland magazine: ‘They have not only been the most supportive, encouraging parents but they also are my biggest fans and my backbone.

‘I could not have asked for better parents. They inspire me daily.’

In 2018, she revealed she wanted to ‘brand herself as a musician’ and ‘not an Instagram girl or model’.

She explained to WWD: ‘If I really want to do [music] as a career I feel like I have to really center myself in my music.’

In March 2018, she featured on Kaskade’s single “Cold as Stone” before releasing her EP Young in June of that year. 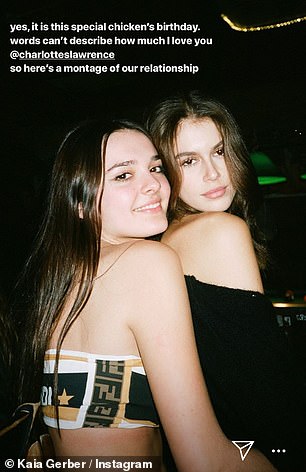 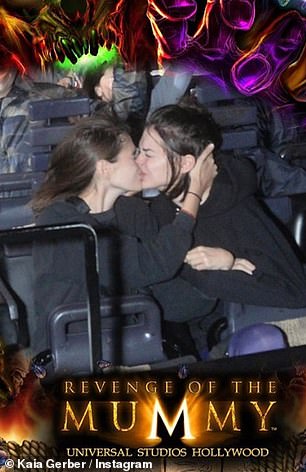 She remains best friends with model Kaia, with the pair often sharing gushing posts about one another online 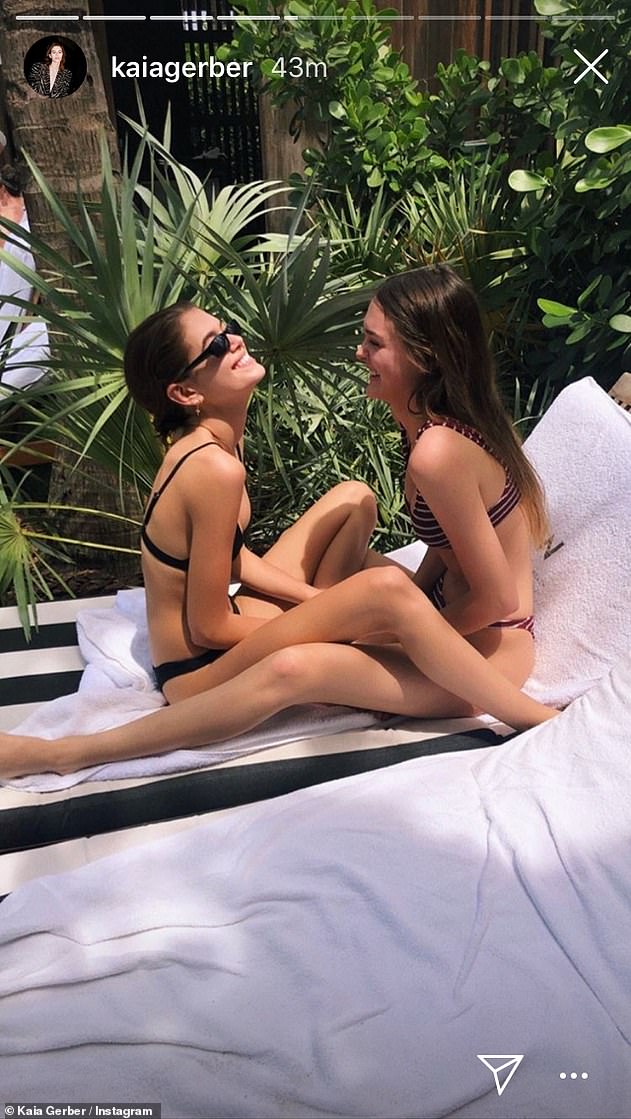 So much fun: Another picture posted online shows the pals grinning ear to ear while having a laugh on a lounge chair in their coordinating bikinis 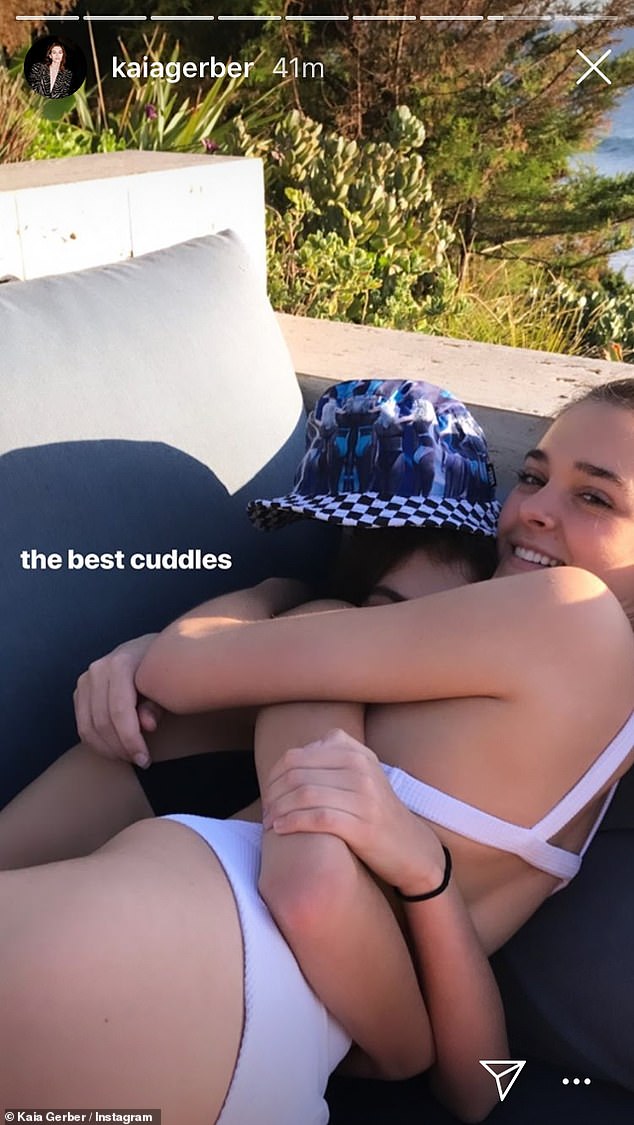 Sweet: Kaia captioned another hugging snap as ‘the best cuddles’

Her music video for her single Joke’s On You, which featured on the soundtrack for the Harley Quinn: Birds of Prey movie, was quick to wrack up millions of views online.

The youngster has been vocal about her activism efforts, taking part in a March For Our Lives protest in March 2018.

Meanwhile Charlotte has also been known to have dated some of the pop most eligible hunks, including hitmaker Charlie Puth.

The pair are believed to have dated for around six months in 2019, with the musician producing several of Charlotte’s songs.

The singer caused a stir in February 2020 when she walked the red carpet at the Vanity Fair Oscar party in a nude gown encrusted with crystals covering her intimate areas. 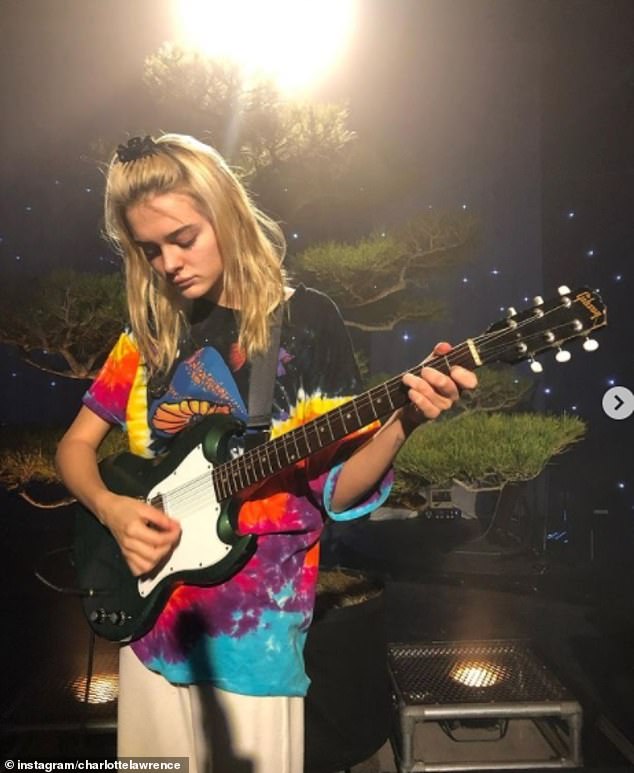 In 2018, she revealed she wanted to ‘brand herself as a musician’ and ‘not an Instagram girl or model’ (pictured)

In January, she announced her second EP titled Charlotte, which was subsequently released in March.

And earlier this year she revealed she began dating music producer Andrew Watt after the he split from singer Rita Ora in March due to conflicting work schedules.

Meanwhile her parents have reacted with a cool head to her rising star in Hollywood.

Bill told The Hollywood Reporter Charlotte’s music career had ‘connected them to her’, saying: ‘My daughter joked that me at 26 was about as mature as her at 19, which is probably fair.

‘I think she should wear full, floor-length jackets and robes more often, but I couldn’t be more proud of her activism with voting, civil rights issues and gun control.

‘I don’t even remember if I was smart enough to vote when I turned 18.’ 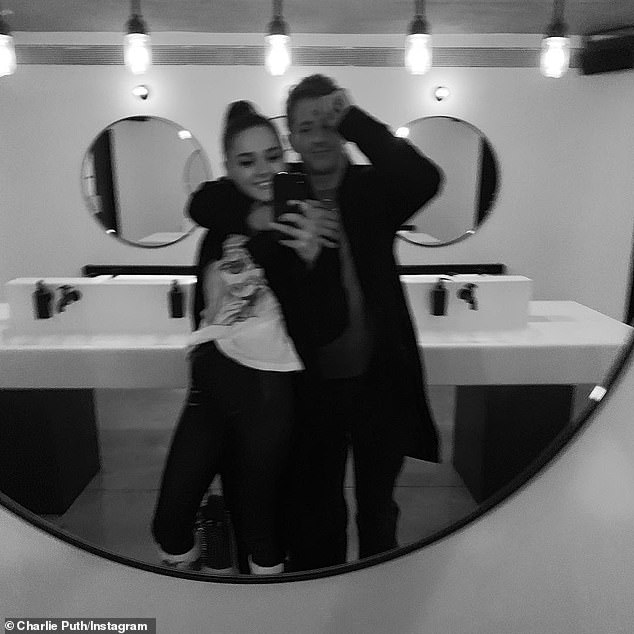 Meanwhile Charlotte has also been known to have dated some of the pop most eligible hunks, including hitmaker Charlie Puth

Among the topics she has opened up to followers about is Covid-19, with the singer revealing she battled the disease earlier this year and begging her follows to ‘protect those less able to survive.’

She clarified: ‘I am going to be completely fine. But many who get it won’t be if too many people get sick too quickly.’

Charlotte went on: ‘So this is not me asking for prayers, for love, for sweet messages. This is me pleading for you all to protect those less able to survive this virus. Stay inside. Please. Whether you feel sick or not, stay inside.’ 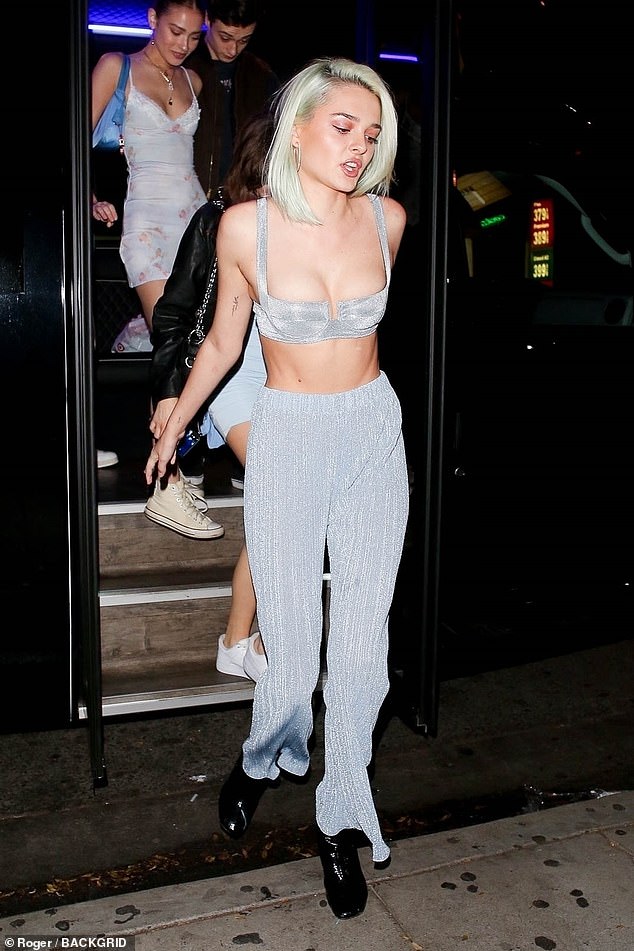 Having recovered from Covid, her Instagram page is full of snaps lounging around Malibu with BFF Kaia or hanging out with other scions like Kit Keenan (pictured, on her 21st birthday in West Hollywood) 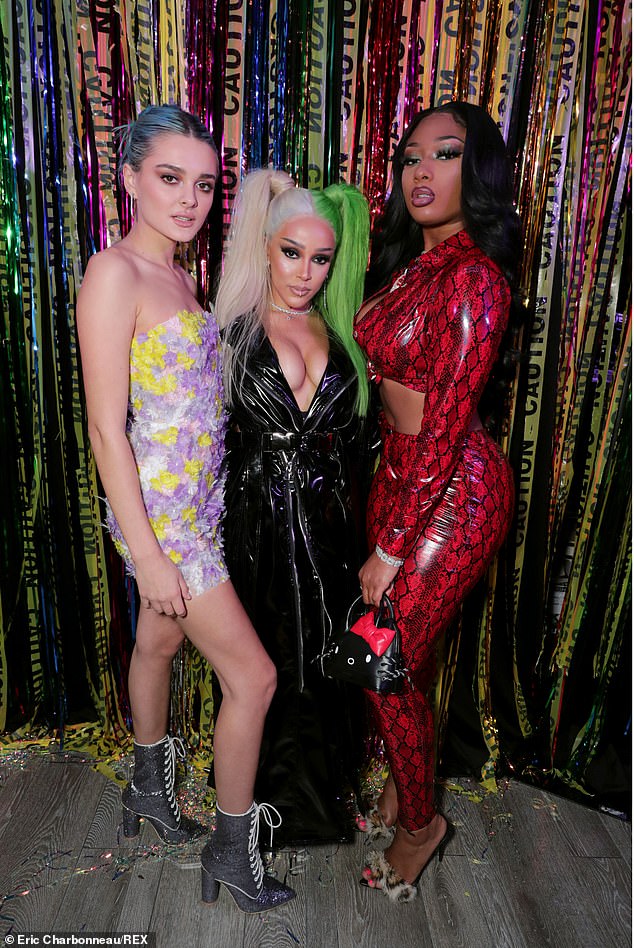 Her music video for her single Joke’s On You, which featured on the soundtrack for the Harley Quinn: Birds of Prey movie, was quick to wrack up millions of views online

The musician and model wrote: ‘Think about someone else getting your loved ones sick because they didn’t listen, because they thought they knew better. Because they were selfish.’

On a more optimistic note she continued: ‘We have the power to slow this down. So please, please isolate yourself.’

She asked further: ‘Stay clean. Stay informed. Stay aware and make others aware. And for the love of god, self f***ing quarantine or you’ll be on my s*** list.’ 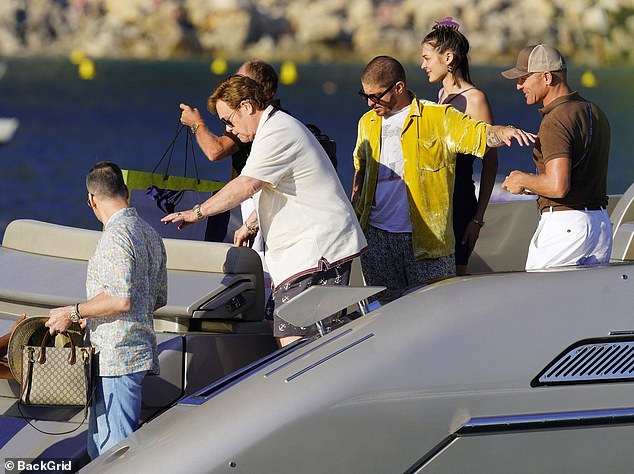 Having recovered from Covid, her Instagram page is full of snaps lounging around Malibu with BFF Kaia or hanging out with other scions like Kit Keenan.

The gang are often seen partying across the US, with Charlotte declaring Kaia is more of ‘a sister’ than a friend.

She also still maintains a close relationship with stars of her parent’s hit show Scrubs, with Zac Braff previously calling her ‘his pseudo-niece’.

Earlier this week, the comedian and children’s author posted a snap of the pair as Charlotte kissed him on the cheek, writing: ‘A kiss from Charlotte Lawrence.’