Us Weekly has affiliate partnerships so we may receive compensation for some links to products and services.

Do us a favor and pick up your phone. C’mon, do it. Okay, now open TikTok. Don’t lie; we know you have it. Give your FYP a scroll. Now, if you’re into gaming, we’re willing to bet that you just got at least one video from @gaming.

@gaming on TikTok is home to one of the biggest channels for gaming content on the platform. But who’s behind the account? And how did they get over seven and a half million followers so quickly?

Answer: Gamelancer. The gaming company that only came out in 2020 has already made a massive splash on social media, gathering followers faster than any other gaming network, not just on TikTok but also on Snapchat, Instagram, and Twitter.

In such a saturated space, making an impact and accruing an audience of that size takes serious dedication and understanding. Let’s figure out how they did it and what’s coming next for the brand.

First, an introduction, just in case this is all new to you. Since their debut in 2020, Gamelancer has put the controllers back in gamers’ hands.

The world of gaming is changing, and Gamelancer knows it. “The future is gaming and NFTs—we are at the frontier of a massive shift in how gaming and the world intersects at scale. Gamelancer is positioned to be the largest Gen-Z gaming conglomerate to spearhead cloud gaming and audio connectivity,” says Razvan Romanescu, the Co-Founder & CEO of Gamelancer Inc.

The platform, which includes public and private rooms, voice chat, watch sessions, Q&As and AMAs with popular streamers, is already generating serious buzz from the community. For a platform that’s still in beta, that’s saying something. 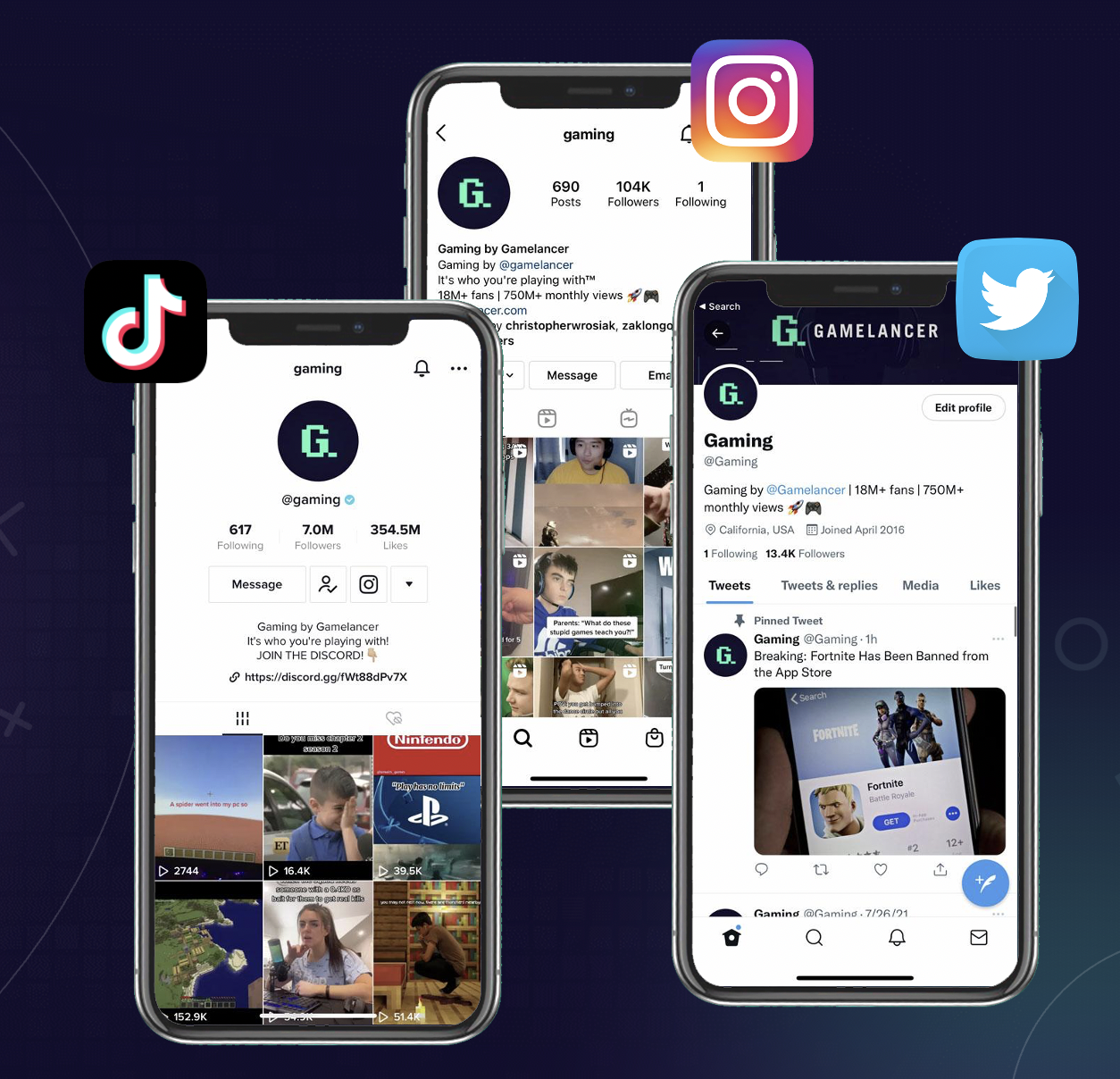 How Gamelancer Took Over Social

As most gamers will happily tell you, gaming is a bit of a rabbit hole. One game will suck you in, and the next thing you know, you’re spending hours and hours on streams, discussing strategies and features on discord, and planning raids with strangers who will become some of your closest friends. The point is — it’s not a hobby; it’s a lifestyle.

When developing their social media strategy, that’s exactly the insight that Gamelancer made their first priority. More than anything else, the brand wanted to be a destination for longtime, rookie, and gamers of all kinds to join together and compete, laugh, and talk about their favorite games, streamers, and characters. Sure, they wanted people to join the platform, but they knew they couldn’t become relevant to the community unless they were playing the content game.

That’s why the brand made acquiring social media handles their first goal. Spoiler alert: it paid off. With a variety of editorial handles, Gamelancer is reaching gamers of all types of backgrounds, with the fastest-growing gaming audiences on both platforms.

Gamelancer set out to create a community, and that’s exactly what they did. Just take it from Darren Lopes, the Co-Founder & COO of Gamelancer Inc.: “Our mission with our social channels initially was to keep people entertained while learning more about their favorite games during the pandemic lockdowns. During that time, the endless support we’ve received from the gaming community has been truly humbling as our network growth has been massive and unparalleled. We’re looking forward to continuing to drive value for gamers, creators, and collectors globally as we head into the future of gaming together. We aim to empower gamers through simple ways to connect with others, validate/add utilities for unique NFTs, and well-designed innovative consumer goods for gamers.”
Gamelancer owns @gaming, @gamelancer, @gamer, and @egirl on TikTok. They also own @gaming, @egirl, @gamegear, @gtagames, and @minecraftfever on Snapchat.

Not to be geeky over digital metrics, but we have to talk about the numbers here because we’re not sure any other platform has come close to the growth Gamelancer and @gaming have seen across channels.

Rome was not built in a day, and neither are social media audiences, which is why we find what Gamelancer has been able to achieve so impressive.

@gaming has over 7.5 million followers. @gamelancer has 4 million. @gamer, 3 million. @egirl, 1.5 million. Together, that constitutes the biggest gaming audience on TikTok. We’ll say that again. Gamelancer reaches more gamers on TikTok than any other platform. Pause for dramatic effect!

Between their four handles, they get over 800 million+ views a month. Video content on @gaming alone has over 345 million likes. The brand typically reposts hilarious content from streamers, best-of moments from a variety of games, and hosts discussions around the biggest gaming news.

With that many followers, you might expect the audience to be passive. Not the case for @gaming. Browse through their comments to discover the passion and engagement coming from the audience. And it’s only going up from here. Gamelancer predicts that by the end of 2021, they’ll reach 25 million followers across TikTok handles.

Similar to TikTok, Gamelancer is taking a multi-pronged approach on older social platforms. They’re also approaching content differently. Whereas fans go to TikTok to be entertained, they’ll go to Instagram and Twitter to stay updated on gaming news. So Gamelancer pivots its strategy on those platforms to provide the information people are looking for.

@gaming on Twitter is the most recent handle Gamelancer launched, with 13.2k followers already. Here they cover big stories in the gaming world, offering a place for diehard fans to discuss, debate, and share opinions — something most gamers are always ready to do.

Snapchat Is Still Around, and Gamelancer Is There

If you think that’s impressive, wait until you hear what Gamelancer is doing on Snapchat. Oh, and just in case you’re a millennial who deleted Snapchat a few years ago, allow us to provide these staggering statistics: The platform has over 265 million daily users. Six out of ten 13–15-year-olds use Snapchat. Two hundred ten million snaps are created a day. Suffice it to say, Snapchat isn’t going anywhere.

Gamelancer knows that all too well. Here’s the rundown on their monthly views. @egirl gets 205 million, @gaming gets 67 million, @gamegear gets 35 million, @gtagamers gets 92 million, and @minecraftfever gets 42 million. All things considered, Gamelancer content receives 400 million monthly views and is the owner of the fastest-growing gaming series on the platform, @egirl. Now that’s how you make a splash.

They also recently announced the @Gaming show on Snapchat, which will further contribute to their rapidly expanding following.

TL;DR: Gamelancer has the cheat code on social media growth. The brand is rapidly growing its audience, cornering the gaming conversation across various titles and communities of players. No one else is doing it like Gamelancer.

Gamelancer has plenty on its to-do list for the upcoming year. In addition to continuing to build their social media communities across handles, the brand also has plans to introduce lines of direct-to-consumer goods designed to enhance the gaming experience.

We know there’s plenty more to come for Gamelancer, but in the meantime, we’re excited to see which Gspecs products are unveiled.

Gamelancer is Changing the Game

We can’t emphasize enough how unprecedented Gamelancer’s stunning social media growth is. By genuinely understanding the principles of the community and what they’re actually looking for, they’ve been able to build the biggest audiences of social followers in the shortest amount of time conceivable.
They know that gaming is about more than just logging hours. It’s about comradery, dialogue, and community. It’s about finding your people, even if they’re many miles away, and absolutely geeking out on every update, upset, and hilarious meme out there.

If you’re going to bet on any new gaming company, we’d recommend betting on the one that just gets it. By gamers, for gamers, Gamelancer represents a new age in the gaming industry, where everyone has the same shot at achieving greatness and having a whole lot of fun doing it.

With 20 million fans from across the globe and all over social media, Gamelancer is the most excited we’ve been about a social brand in a while. Time will tell how the platform is able to expand into direct-to-consumer goods, but we’re optimistic. While we wait for the release of Gspecs products, join the millions of followers who contribute to the thriving Gamelancer social community.

This post is brought to you by Us Weekly’s Shop With Us team. The Shop With Us team aims to highlight products and services our readers might find interesting and useful, such as face masks, self tanners, Lululemon-style leggings and all the best gifts for everyone in your life. Product and service selection, however, is in no way intended to constitute an endorsement by either Us Weekly or of any celebrity mentioned in the post.

The Shop With Us team may receive products free of charge from manufacturers to test. In addition, Us Weekly receives compensation from the manufacturer of the products we write about when you click on a link and then purchase the product featured in an article. This does not drive our decision as to whether or not a product or service is featured or recommended. Shop With Us operates independently from advertising sales team. We welcome your feedback at ShopWi[email protected] Happy shopping!