Home » Lifestyle » I couldn’t help but wonder…why is Sex and the City being revived?

I couldn’t help but wonder…why is Sex and the City being revived? 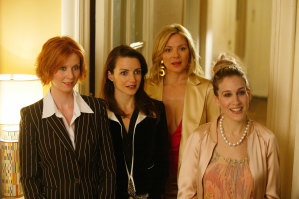 Sex and the City, minus Samantha, is getting a TV revival.

What’s this I hear about a new Sex and the City series? It’s official. A 10-episode revival of the iconic series – which originally ran for six seasons between 1998 to 2004, before its 2010 big-screen sequel bombed amid franchise fatigue – is being created for HBO’s streaming service, HBO Max.

No way. Star Sarah Jessica Parker confirmed the news on Instagram on Monday, with a line borrowing Carrie Bradshaw’s lexicon: “I couldn’t help but wonder… where are they now?” she posted. According to Hollywood trade rag Deadline, the series will be titled And Just Like That… with main showrunner Michael Patrick King back at the helm as executive producer.

Please tell me we'll see it in Australia. Well, surely. Unless HBO Max makes a sudden entry into the Australian streaming landscape, the series should air on Foxtel and Foxtel’s Binge, after the pay TV operator extended its deal with HBO’s parent company WarnerMedia last May.

Wait, wait. Where’s Samantha? I knew you would ask that. Kim Cattrall won’t be appearing in the series. The reason involves a lengthy recap of what you might call the weirdest pop culture drama of late 2017 to early 2018.

Let me grab a cosmopolitan… Okay, I’m ready. Back in September 2017, Parker let slip that a proposed third film in the franchise had been cancelled despite the fact they had a “beautiful, funny, heartbreaking, joyful, very relatable script and story”. It was quickly revealed that Cattrall’s refusal to board the project – she thought the script, which saw Chris Noth’s Mr Big die of a heart attack, didn’t offer much for Samantha – was what killed the film.

Ugh, classic Samantha. In an interview with Piers Morgan at the time, Cattrall poured fire on the rumours saying she had no intention of ever doing the film and that she’d “never been friends” with her cast mates. In an Instagram post following the death of her brother in February 2018, she also called Parker a “hypocrite” and accused her of faking her “nice girl persona”.

Wow. Okay, yep that explains it. The franchise’s future seemed doomed, with Davis later stating “there’s a very odd narrative out there right now, and I don't know how we’re going to fix it."

So this revival’s quite a surprise then? In as much as any reboot of a once-beloved TV series can be considered a “surprise” these days (you do realise even Punky Brewster was resurrected recently?). The ever-igniting streaming wars have made such legacy TV franchises a valued commodity, so it was only a matter of time before HBO tapped into one of its defining hits.

So how will the series deal with Samantha’s absence? We’ll find out soon enough. Considering the public animosity surrounding the group’s split they'll likely just write her out and it’ll probably be something pretty bleak, like she’ll die from herpes.

I mean, it’s not not believable? Poor Samantha.

END_OF_DOCUMENT_TOKEN_TO_BE_REPLACED

END_OF_DOCUMENT_TOKEN_TO_BE_REPLACED
Recent Posts
We and our partners use cookies on this site to improve our service, perform analytics, personalize advertising, measure advertising performance, and remember website preferences.Ok