Pigeon Forge, Tennessee — A wall of ice at the Titanic Museum Attraction in Tennessee collapsed and injured three guests, the museum’s owners said.

Those harmed were taken to the hospital with unspecified injuries, Mary Kellogg Joslyn and John Joslyn wrote on the attraction’s Facebook page. The extent of their injures was unclear.

“Needless to say, we never would have expected an incident like this to occur as the safety of our guests and crew members are always top of mind,” the owners said.

The ship-shaped museum closed after the Monday night collapse but reopened for those with tickets on Tuesday, according to a post. The owners said the affected area has been blocked off, and they estimate it will take at least four weeks for the iceberg wall to be rebuilt. 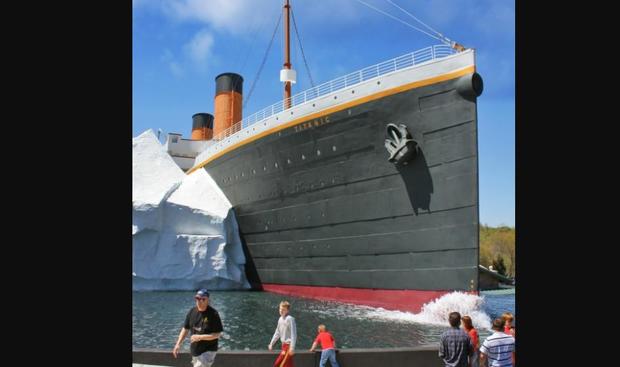 The Pigeon Forge Police Department said in a statement that the collapse appears to be accidental, the Knoxville News Sentinel reported.

Cedar Bay Entertainment opened the attraction in 2010. The company has another Titanic museum in Branson, Missouri.

Guests receive boarding passes containing the names of actual passengers or crew members who were aboard the British passenger liner that sank in 1912 on its maiden voyage after hitting an iceberg.

Visitors can see more than 400 Titanic artifacts, shovel “coal” in the boiler room, feel 28-degree water through self-guided tours and try to stand on a sloping deck, according to the attraction’s website.

The News Sentinel describes Pigeon Forge as a “popular tourist area in Sevier County that’s a gateway to the Great Smoky Mountains National Park and home to the amusement park Dollywood.”