As two performers thrown out of work during the pandemic, Amber McMahon and Lucia Mastrantone were struck by the theatrical potential of a disused landmark building on Oxford Street in Paddington. 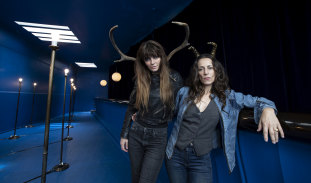 Amber McMahon (left) Lucia Mastrantone wear props from the immersive theatre show The Power Of Love that tells the story of an iconic old building in Darlinghurst. Credit:Jessica Hromas

But it was originally one of Sydney's earliest suburban cinemas, West’s Olympia, which opened with a screening of the silent film The Power Of Love in 1911.

According to cinema historian Ian Hanson, it was a picture palace with seating for 2,500 people on two levels and space for an orchestra.

One of Sydney’s earliest cinemas: the West’s Olympia opened in 1911. Credit:Kino magazine

The Olympia became the Odeon in the 1950s, the Olympia again as a Greek movie house in early '60s, the art-house Mandala in the late '60s and the Academy Twin in the early '70s, with a new entrance further down Oxford Street. To host the musical The Island of Doctor Moron, it was renamed the New Olympia in 2014.

McMahon and Mastrantone have drawn on the building's colourful history to create what they call "a beautifully intimate" show for just six people that will run twice a night.

Patrons will be led through an immersive love story – moving through the building with "eat me, drink me" treats along the way – and finish with a dinner.

"It's an adaptation of the narrative of the first film that was ever screened there," McMahon said. 'The journey is a love letter to the community and to theatre."

The show, also titled The Power Of Love, is getting a short season from Sunday until the owners, Boston Global and Central Element, turn the building into a boutique hotel with a rooftop restaurant and bar, function centre and medical facility serving St Vincent's Hospital across the road in the new year.

Mastrantone, who described herself and McMahon as architecture junkies, lived behind the old cinema for a decade and watched its many changes. 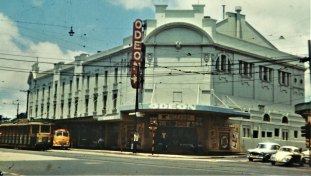 The former West’s Olympia as the Odeon in 1959. Credit:John Alfred

"I used to just fantasise and think 'wouldn't it be amazing to take over that building and make a piece of work in there," she said. "And as soon as Amber and I started thinking about what building could we make a really boutique, bespoke performance in, with only six people so it's completely safe, that building jumped to mind."

Once they had approval from the owners, they renamed it Grand Pacific Green Room for the show, wanting to "unlock the secrets of the building" at night and have it operate like a green room for actors and other artists who want to organise a script reading, catch up for a coffee or film an audition during the day.

"After COVID, it feels like we really need to galvanise our community again and have these spaces where everyone is welcome," Mastrantone said.

And once the show closes, the duo want to move onto other disused buildings and create new shows that tell their stories.

END_OF_DOCUMENT_TOKEN_TO_BE_REPLACED

Police did not handle a 111 call reporting concerns about a 2-year-old girl’s welfare in accordance with police policy, standard operating procedures and good practice, the Independent Police Conduct Authority has found. Police found the child dead the next day. On March 20, 2019, Niki Sturgess called 111 to report

END_OF_DOCUMENT_TOKEN_TO_BE_REPLACED
Recent Posts
We and our partners use cookies on this site to improve our service, perform analytics, personalize advertising, measure advertising performance, and remember website preferences.Ok