Jacob Blake, the 29-year-old Black man who was shot seven times in the back by a Kenosha, Wisconsin, police officer in late August, made a brief court appearance on Friday for charges that were filed in July. Blake, who remains in the hospital, pleaded not guilty to charges of criminal trespass, third-degree sexual assault and disorderly conduct.

The charges stem from a May 3 incident in which he’s accused of breaking into the home of his ex-girlfriend, the mother of his three children, and allegedly sexually assaulting her before stealing her truck and debit card, according to a criminal complaint.

In his first public appearance since the shooting, Blake appeared before the court in a shirt and tie from his hospital bed. He entered not guilty pleas to all three charges and has waived his preliminary hearing.

The judge set his bond at $10,000 on the condition that he can’t have violent contact with the alleged victim, possess any weapons or commit further crimes while on bond. The bond is a signature bond, meaning Blake did not have to pay any more than the $500 he previously spent to clear the arrest warrant against him.

Blake also promised not to leave Wisconsin other than to obtain medical care. 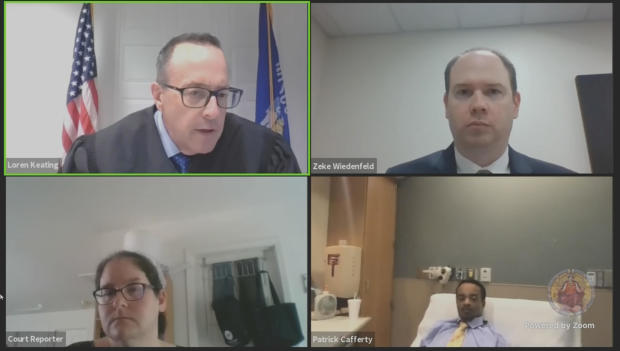 Blake’s shooting sparked nationwide protests against racism and police brutality. Those demonstrations turned deadly in Kenosha, where two people were fatally shot. A 17-year-old has been arrested and charged with their deaths.

The August 23 incident began after a woman called police to report that her boyfriend, who was not supposed to be on the premises, was present, the DOJ said. It’s not clear what role Blake played in the initial incident — but video showed Blake walking to an SUV and opening the driver’s side door before Kenosha police officer Rusten Sheskey grabbed his shirt and fired his service weapon seven times into his back.

On August 27, the Department of Justice said the case is under a federal civil rights investigation.

Blake survived the shooting, but is now paralyzed, his attorneys said. Blake was initially handcuffed to his hospital bed because of the active arrest warrant against him, but the handcuffs were removed after he posted bond on the warrant.

Wisconsin officials have not disclosed whether Sheskey was aware of the charges against Blake at the time of the shooting. The police union claims that the officers were aware of the arrest warrant.

END_OF_DOCUMENT_TOKEN_TO_BE_REPLACED

END_OF_DOCUMENT_TOKEN_TO_BE_REPLACED
Recent Posts
We and our partners use cookies on this site to improve our service, perform analytics, personalize advertising, measure advertising performance, and remember website preferences.Ok