Jim Carrey threw it back to one of his most iconic roles ever during this ‘SNL’ cold open, while Alec Baldwin played Donald Trump for what’s likely his final appearance.

SNL never fails to impress, but the first episode back since Joe Biden and Kamala Harris‘ historic win was one for the books! Just hours after the Joe and Kamala were named President-elect and VP-elect, and made victory speeches, SNL whipped together a cold open that hilariously spoofed the entire thing. “I honestly kinda can’t [believe I won]. It’s been so long since something good happened…we kept edging closer and closer, it was like having sex with Sting! I’ve never felt so alive and I’m barely alive,” Jim Carrey’s Joe joked.

Maya Rudolph‘s Kamala Harris was right by his side, in a near-identical white suit to the Carolina Herrera one the real Kamala rocked. “Like Joe, I am humbled and honored to be the first female — yes — the first Black, the first Indian American, and the first bi-racial Vice President,” Maya’s Kamala said, perfectly copying her voice and intonation. “If any of that terrifies you, I don’t give a funt. My husband is also Jewish and the first second husband, so between us, we check more boxes than a disqualified ballot,” she joked, before jamming out to a hip hop song with Joe.

Alec Baldwin‘s Trump then popped in for a less-than-factual concession speech, where he appeared to be confused about whether votes being counted would help in his favor. “Of course they’re trying to steal the election! Stop the count! Stop the count…oh we’re behind! Count all the votes!…look at all that red!” he said, pointing to a very red looking map.

“Unlike President Trump, we do accept the results,” Jim’s Joe responded, before epically borrowing from his iconic Ace Ventura character. “We aren’t mad at them!…This is one of those situations in life where there must be a winner and a LOOOOOSER,” he hilariously added, clearly referencing the ’90s classic. To boot, he and Maya’s Kamala held up “L’s with their hands, really driving home the point. 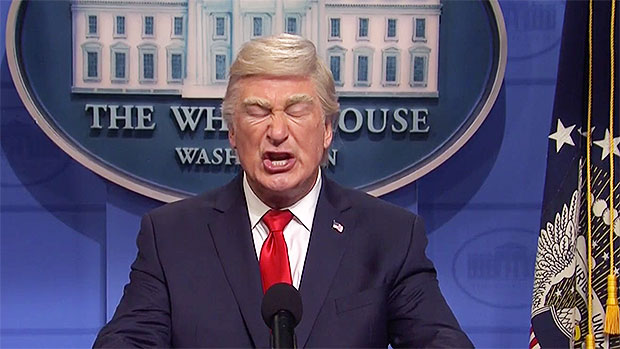 The SNL sketch comes after Joe Biden and Kamala Harris’ historic win on Saturday, Nov. 7. After days of waiting for more votes to be tallied in key swing states — including Joe’s home state of Pennsylvania — CNN finally projected the Democratic nominee as the next President of the United States. “This is the time to heal America,” Joe said to the cheering and honking crowd. “We’re reminded tonight of those who fought so hard for so many years to make this happen. Once again America has bent the arc of the universe more toward justice,” he also said.

For her part, Kamala delivered an incredibly inspiring speech, walking out to Mary J. Blige‘s empowering 2007 hit “Work That.” Wearing all-white as a nod to the Suffrage Movement in the early 1900’s, she said, “While I may be the first woman in this office, I will not be the last. Because every little girl watching tonight sees that this is a country of possibilities.” The crowed erupted with cheers as she made statement. “All the women who fought for the right to vote over 100 years ago…and now with a new generation of women who cast their vote and fought for their fundamental right to vote and be heard. Tonight I reflect on their struggle, their determination,” she also said. 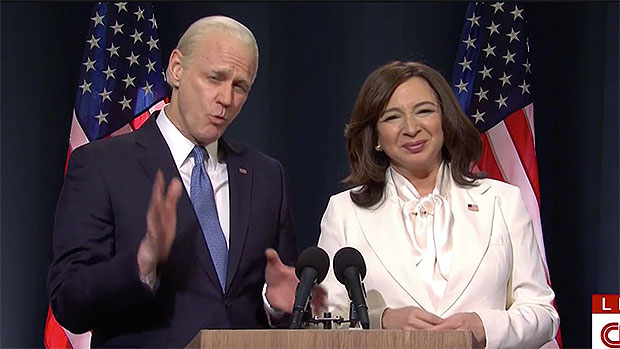 For his part, current president Donald Trump hasn’t been keen to accept the results — and, perhaps not surprisingly, is refusing to concede. “THE OBSERVERS WERE NOT ALLOWED INTO THE COUNTING ROOMS. I WON THE ELECTION, GOT 71,000,000 LEGAL VOTES. BAD THINGS HAPPENED WHICH OUR OBSERVERS WERE NOT ALLOWED TO SEE. NEVER HAPPENED BEFORE. MILLIONS OF MAIL-IN BALLOTS WERE SENT TO PEOPLE WHO NEVER ASKED FOR THEM!” he alleged via Twitter.

Alec Baldwin, who has been playing Trump on SNL since 2016, is also ready to “retire” the character he’s so brilliantly made his own. “Alec is so so happy that he will be able to retire the wig. The Donald Trump character for Alec has been a blessing and a curse and he is very very happy that he will only have to play it maybe one more time tonight,” a source told HollywoodLife ahead of the Nov. 7 episode, noting that Alec will gladly come back if needed by show runner Lorne Michaels.

END_OF_DOCUMENT_TOKEN_TO_BE_REPLACED

END_OF_DOCUMENT_TOKEN_TO_BE_REPLACED
Recent Posts
We and our partners use cookies on this site to improve our service, perform analytics, personalize advertising, measure advertising performance, and remember website preferences.Ok