Jobs at risk from $20 billion slump in road, rail projects

Australia has suffered a $20 billion slump in major project approvals since the coronavirus crisis began, shrinking the pipeline of new construction at the same time political leaders claim their infrastructure plans will boost growth.

A new industry analysis warns the value of major contracts being awarded fell to $6.7 billion in the first eight months of this year, down from $27.1 billion approved last year. 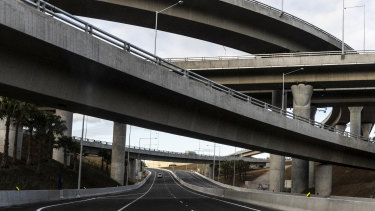 The slowdown has sparked fears that construction work will stall when the economy is struggling to emerge from recession and the federal government is phasing out its JobKeeper wage subsidy for more than 3.5 million workers.

While Deputy Prime Minister Michael McCormack has promised new spending on infrastructure in the October 6 budget, the commitments could be too late to sustain a steady flow of work given the shortfall so far this year.

The analysis from Infrastructure Partnerships Australia, an industry group, comes as the federal government's peak advisory agency, Infrastructure Australia, says the pipeline has "slimmed down" even though more work is needed.

"As governments prepare for the delayed budget season, this is the time to scale up for the long economic recovery ahead."

The industry group, whose members include investors and infrastructure owners, calculated the figures amid a new debate about whether the pandemic will force a rethink on new airports, roads, ports and urban rail projects.

With migration stopped and population growth certain to fall, Grattan Institute transport director Marion Terrill said some projects may no longer stack up.

Mr McCormack is promising more spending in the October budget, while Labor leader Anthony Albanese is calling for more support for regional infrastructure as the pandemic changes the way people work.

Governments have committed $15.8 billion to public infrastructure since March, says Infrastructure Partnerships Australia, but this is separate from projects going ahead under contracts agreed with construction companies.

The group says its measure of contracts being awarded tallies projects worth more than $300 million across governments.

The figures suggest NSW and Victorian approvals are down heavily on last year, although the figures also fell in other states.

The trend reflects the decisions last year to award contracts on the Snowy Hydro expansion, the Sydney Metro, affordable housing projects, the Sydney Football Stadium and the Cross River Rail in Brisbane.

Future construction depends in part on contracts being awarded later this year or early next year for the Sydney Metro West and the extension of the Sydney Metro to the Western Sydney Airport.

With the federal budget less than four weeks away, the Morrison government is considering a longer list of projects to support or accelerate.

Infrastructure Australia this year identified 147 priority projects for the country including six with the highest priority: the upgrade to the M4 in Sydney, the Sydney Metro, the Western Sydney Airport, the Melbourne M80 ring road, the Melbourne North-East Link and the Brisbane Metro.

Infrastructure Australia chair Julieanne Alroe said there were only a "relatively few mature projects" on the list and that more work was needed on major projects for the future.

"Other projects have been identified as problems or opportunities that would deliver considerable economic benefits, but a lot of them have still got to go through the rigorous business case and the detail planning stage," she said.

"Trying to accelerate that, by providing upfront seed funding and providing work for the consulting, engineering and design sectors, which are struggling a little bit at the moment, is very important.

"The pipeline, particularly for private projects, has really slimmed down, so that's another part of industry capability that we need to make sure is protected."

Ms Alroe, who was chief executive at Brisbane Airport for nine years to 2018, said it was important to maintain the pipeline of existing projects while bringing forward new ones.

"Big projects take a long time to get off the ground," she said.

"One of the challenges for all our governments is that, despite the fact that we have capacity to do more, it's not an infinite capacity. There's got to be some prioritisation and equity in how money is spent around the country."

Mr Dwyer said the fastest way to boost the economy could be to approve a large number of smaller projects.

"Give us the right sort of projects that we can deploy quickly with the right risk profiles and that happen to be good from a stimulus perspective, because if you do high velocity projects, you can get people into jobs quickly," he said.

"I don't hear contractors calling out for an acceleration in the existing pipeline of mega projects. What they're saying is give us stuff in that sweet spot between $100,000 and $500 million.

"We can roll those out quickly. We can appropriately scope the risk, we can take a portfolio approach to cost overruns and under-runs and we can move on to the economy quickly."

Our weekly newsletter will deliver expert analysis of the race to the White House from our US correspondent Matthew Knott. Coming soon. Sign up now for The Sydney Morning Herald‘s newsletter here, The Age‘s here, Brisbane Times‘ here and WAtoday‘s here.

END_OF_DOCUMENT_TOKEN_TO_BE_REPLACED

END_OF_DOCUMENT_TOKEN_TO_BE_REPLACED
Recent Posts
We and our partners use cookies on this site to improve our service, perform analytics, personalize advertising, measure advertising performance, and remember website preferences.Ok