I’m so ready to watch Tayshia Adams find love, and apparently, so is her ex. John Paul Jones’ Instagram for Tayshia Adams’ Bachelorette debut suggests there’s no bad blood between the two, and there’s nothing I love more than amicable exes. On Nov. 5, when Adams finally stepped in to replace Clare Crawley as the Season 16 Bachelorette, Jones took to his IG Stories to react with a pic of Adams on his TV screen and the caption, "Go TayTay!!!!!" IMO, you don’t use five exclamation marks unless you really mean it, so Jones’ excitement for his ex must be the real deal.

Back in August, when it was first rumored Adams would replace Crawley as the new lead mid-season, Jones was totally supportive of his ex’s potential opportunity. "I’m really happy and excited for her on this new journey," he told Us Weekly soon after the rumors broke. "I hope she finds the love and happiness that she deserves." He expressed a similar sentiment to People later on in the month, saying, "I’m very excited for her. I think this seems like a great time in her life to really settle down and choose the one." Cute alert! 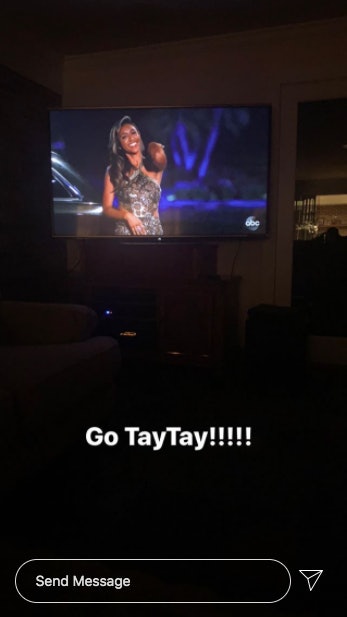 Over a year ago in October 2019, the Bachelor in Paradise alums shocked fans by breaking up only six weeks after confirming they were together during the BiP reunion special. Adams announced the split to her followers in a since-deleted Instagram post, explaining, "The reality was, we were living on opposite coasts, and working insane schedules that made it impossible to see each other and build a life with each other. We truly did the best we could, but at this time have decided that what is best for the both of us is to go our separate ways." However, she assured fans they would "continue to remain in each other’s life," and it seems that wasn’t just an empty promise.

Though I’m still not over TayTay and JPJ, it does warm my heart to see the two still have each other’s backs. Here’s hoping Adams finds love just as quickly as Crawley did.

END_OF_DOCUMENT_TOKEN_TO_BE_REPLACED

END_OF_DOCUMENT_TOKEN_TO_BE_REPLACED
Recent Posts
We and our partners use cookies on this site to improve our service, perform analytics, personalize advertising, measure advertising performance, and remember website preferences.Ok