Home » Lifestyle » Kanye West talks about his mental health struggles: ‘You pretty much don’t trust anyone’

Kanye West talks about his mental health struggles: ‘You pretty much don’t trust anyone’

Alongside more frequently interviewed guests like Ellen DeGeneres and Tiffany Haddish, the new season of David Letterman’s Netflix interview show, “My Next Guest Needs No Introduction,” features one celebrity who isn’t as generous with sit-down chats: Kanye West.

The episode, which begins streaming Friday, features everything from one of West’s Sunday Services-style performances to a fashion show of sorts in which West dresses Letterman in some of his Yeezy-designed clothes.

In between, the two men discussed a number of hot-button topics from Me Too, mental illness and, of course, President Trump, whom West has controversially voiced his support of over the past several years.

So what did we learned from the episode?

West began his defense of Trump by citing people he works with –”black, female, all different types of people” – who voted for the current president, claiming that “we don’t all have to feel the same way about things.” 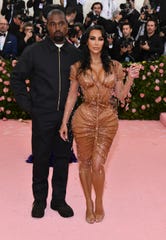 The conversation got spicier when Letterman asked West if he voted in the 2016 election, which West has previously denied.

“Then you don’t have a say in this,” Letterman replied as the audience applauded.

“You feel everyone wants to kill you, you pretty much don’t trust anyone, and they have this moment where they handcuff you, they drug you, they put you on the bed, and they separate you from everyone you know,” he said about his stint in the hospital. “That’s something that I’m so happy I experienced myself so I can start by changing that moment. When you are in that state, you have to have someone you trust. It is cruel and primitive to do that.”

West, who was diagnosed as bipolar, also explained his experiences with medication.

“If you don’t take medication every day to keep you at a certain state, you have a potential to ramp up and it can take you to a point where you can even end up in the hospital,” he said. “When you ramp up, it expresses your personality more. You can become almost more adolescent in your expression. This is my specific experience that I’ve had over the past two years, because I’ve only been diagnosed for two years now.”

West has his doubts about Me Too

Letterman and West sparred on the Me Too movement, with West expressing doubts while Letterman took the accusers’ side.

“We as a society are constantly in fear,” West said.

“Well, you mention a general fear of the male side of this situation,” Letterman responded. “I would submit that it’s not equal by any equation to the fear women feel being the other side of that.”

West then doubled back, explaining, “I’m definitely supportive of the women. What I’m saying is we’re not allowed to have any conversation. When you go to court, both sides can talk. This is a court of public opinion where when someone bombs first, the war is supposedly over.”

After West went on a tweet storm in December 2018 accusing Drake of “threatening his family,” communications have publicly been nonexistent between the two rappers.

But he seemed more charitable during the Letterman interview, praising Drake’s song “Crew Love” without mentioning the rapper’s name.

“An artist, which I will not mention because I’m not allowed to mention him or any of his family members, has a line, well, we had a little beef last year,” he said. “He has this line that I love that says, ‘I told my story and made history,’ like ‘made his story’ and ‘made history.'”