Home » Lifestyle » ‘Keep boys away from your sister’, should we stop saying this to boys?

‘Keep boys away from your sister’, should we stop saying this to boys?

“You’ve got one job here, keep the guys away from your sister.” 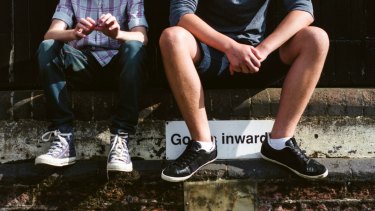 Joe Biden’s unsolicited advice: “You’ve got one job here, keep the guys away from your sister.”Credit:Stocksy

Leaving aside the fact that the girl in question is 13, and it’s just creepy that the first thing the former Vice President seems to latch on to when interacting with girls is their nascent sexuality, the exchange kicked off a heated debate about the role men should play in protecting women from other men.

Some might argue that there was nothing to see here, that siblings should be encouraged to look out for siblings. Haven’t kids been told this for generations?

In the age of #MeToo, this could be an expression of the change in the way we talk about violence against women, shifting the focus from women’s behaviour to that of men.

That change was on display in Victoria in the year between the murders of Eurydice Dixon and Courtney Herron. After the murder of Ms Dixon, police warned women to take more care. After the death of Ms Herron, Assistant Commissioner Luke Cornelius placed the responsibility squarely on men: “The key point is [that] this is about men’s behaviour, it’s not about women’s behaviour”.

So props to Biden for being part of the change. But here’s the problem: does Biden’s — and similar sentiments — actually change anything?

Is telling boys to protect their sisters from other boys a step in the right direction? Or does it just entrench the kinds of regressive attitudes in a different, slightly more benevolent way?

For starters, Biden’s directive to the boy completely sidesteps the wishes of the girl. Maybe she wants to spend time with boys. That’s a matter for her to decide. Not her brother and not Joe Biden.

Talking about girls and women in this way completely strips them of their agency. In Biden’s world, girls and women appear to be nothing more than helpless objects. It is men, not women, who have the “job” of deciding who girls and women should socialise with.

Telling brothers to protect their sisters from boys also assumes that boys and men are natural predators. It’s essentially an admission of defeat when it comes to male violence. It starts from the premise that men are not capable of stemming their violence towards women and therefore the best women can hope for is protection rather than autonomy and actual safety.

The deeper problem with Biden’s comment lies in the fact that it simply reinforces existing unequal power relations between men and women — and boys and girls. It is boys and men who exert power.

Sure, in this instance the boys are being instructed to use that power in a protective manner. But it’s hardly what you would call progress when a girl remains a possession of the boys and men in her life.

And it’s cold comfort to girls and women that the only reason we’re not targets of violence or abuse is because the would-be attacker is being eyed by another male. Presumably the boys are not going to be able to chaperone her at every point across her life.

In this respect, despite Biden's advice, nothing changes in the violence equation. Girls and women remain powerless objects defined by their sexual status while men are masters of their own fate and the fate of the women around them.

Our course, no one is suggesting that we shouldn’t encourage children to look out for family and friends. But overlooking the gendered nature of Biden’s comment is naive. A far better message to give boys is to tell their mates that girls are people, not possessions or bargaining chips.

Kasey Edwards is the author of The Chess Raven Chronicles under the pen name Violet Grace.