Man of many faces: Barry Humphries, the Archibald Prize’s most painted celebrity finalist 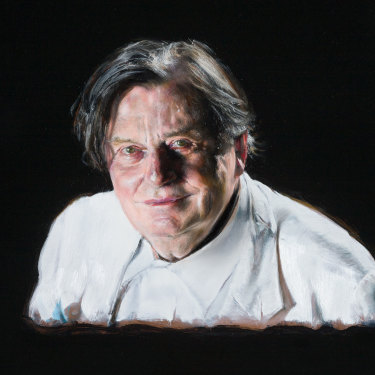 Barry Humphries has appeared in more Archibald exhibitions than any other Australian celebrity, a seven-time finalist in various guises during the controversial portrait prize’s 100 years.

But two artists who won prizes painting what they call Humphries’ “fugitive face” say it would be unlikely they would succeed if they had him as their subject today.

“There’s not a chance he would have even been a finalist because of woke/cancel culture. I’m sure he wouldn’t have won if I submitted his painting this current year,” Melbourne artist Louise Hearman, who won the Archibald Prize with a portrait of Humphries in 2016, said. 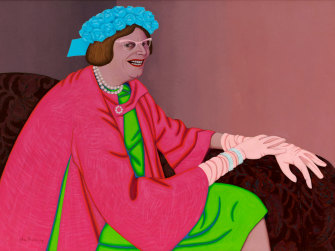 Hearman spent so many years labouring over her portrait, Barry, she told her partner, photographer Bill Henson, it would be her last.

“The Archibald has become so political – it has an agenda which is a shame, I have admired Barry since I was a child listening to his records, and he is kind to artists and is a painter himself,” she said.

Bowral-based Tim Storrier, who won the 2014 Packing room prize with his portrait of Humphries as his alter-ego The Member, Dr Sir Leslie Colin Patterson KCB AO, and is a former Art Gallery of NSW trustee and Archibald judge, said he understood the complexities of judging paintings for the prize.

“Sir Les may well have been cancelled but it doesn’t mean he can’t rise again. He’s extremely funny and so vulgar; even with the political correctness of today, he still has a great face to paint,” Storrier said. 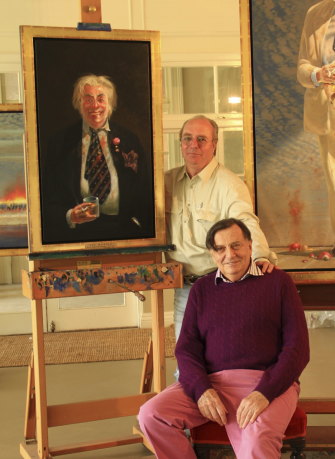 Tim Storrier with Barry Humphries and the portrait of Sir Les Patterson entered into the 2014 Archibald Prize.

The Melbourne Comedy Festival may have stripped Humphries name from its biggest award, following comments he made about transgender people, but there’s one that can’t be taken away: his status as the most painted celebrity to be a finalist in the nation’s longest-running portrait prize.

“Surprisingly our celebrity record holder is not David Wenham or Hugo Weaving, it is Barry Humphries,” said Natalie Wilson, the curator of the Archie 100: A Century of the Archibald Prize, which will run from Saturday, June 5, alongside the 2021 Archibald, Wynne and Sulman prizes.

Edging out other more classic beauties, including Cate Blanchett, Nicole Kidman and Asher Keddie who are regular subjects, Humphries as Dame Edna Everage, Sir Les and himself, is the famous face that has featured most frequently as a finalist over 52 years, for more than half the prize’s 100 years.

“It is true, I have been entered several times … not to sound too rude but Edna’s been entered more times than she can remember, and Sir Les can’t remember,” Humphries said from his home in London this week.

“I don’t have very positive things to say about the Archibald – every year it gets worse but the rejects at the Salon des Refusés are the ones I am interested in. I don’t know who the judges are but I think they must be all dentists, not artists or art connoisseurs.” 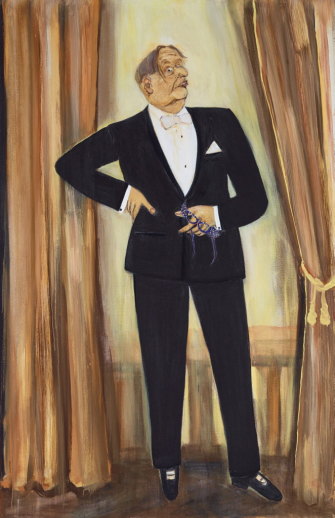 Well Dressed for a Sydney Audience by Rodney Pople.

Humphries, 87, had to convince the reclusive artist John Brack, a fellow “satirist of suburbia” to paint Edna, for his first Archibald appearance in 1969. It was before Edna declared herself a dame in 1974, the same year her alter-ego, fellow Archibald subject and two-time Packing Room Prize winner, the boorish Sir Les, made his first appearance.

”Brack had been art master at Melbourne Grammar, my alma mater, so I suggested to him to paint Edna and went to his Melbourne home for several sittings in full costume,” Humphries said. 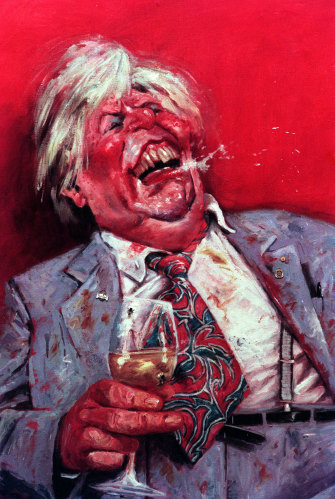 “Edna had just gone into Thai silk, it was the age of Thai silk, and Brack had a problem painting the coral coat, because it looked one colour from one angle, and another colour from another. Edna had just moved into her cat-eye glasses, but her hair hadn’t gone mauve yet. I think the portrait captures her predatory look so well and the shark-like smile. I like it.”

The portrait was named a finalist and was purchased by the Art Gallery of NSW for its permanent collection.

Humphries has also been painted by all-time Archibald record holder Sir William Dargie in 1972. The Mask of Barry Humphries is in the National Portrait Gallery and the casts for death masks Dargie made of his head are in the Victoria State Library. Sidney Nolan and British painter David Hockney have too sketched Humphries.

“Clifton Hugh painted me four times but never entered them in the Archibald and I was going to sit for [artist William] Dobell but he died. I don’t have any of the images of myself in my home except for an Arthur Boyd portrait in an Australian bush landscape. I would hate to walk into a room and see a version of me on canvas,” Humphries said. 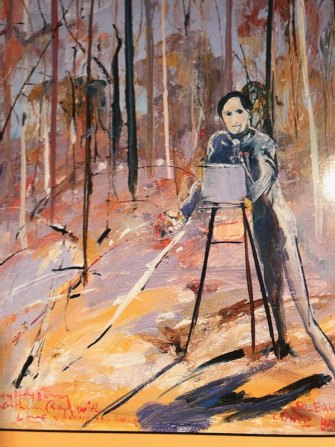 “I love sitting for artists as it is a good opportunity to sit still and I like the smell of turpentine when they paint in oils. I like chatting to artists – I seem to know more painters than actors.”

A friend since art school days, Martin Sharp painted Her Majesty Edna the First which was an Archibald finalist in 1977. 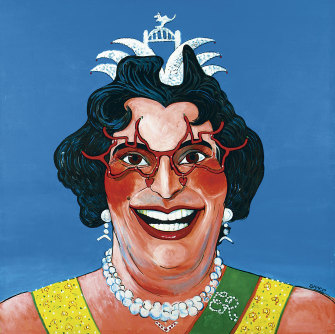 Martin Sharp’s Her Majesty Edna the First a 1977 Archibald finalist.

Both Bill Leak and Storrier won the Packing Poom prizes with their portrayals of Sir Les in 2000 and 2014. The Charles Billich 1976 portrait seems to have been lost, and Humphries said the 2014 entry by Rodney Pople should have been declared invalid. “I never sat for that so that’s a bit dodgy, he painted it from a photo.”

Both Brack and Herman’s portraits appear in the Archie 100: A Century of the Archibald Prize.

“The cult of celebrity has always played a part in success at the Archibald since the early days,” said Ms Wilson, citing the example of Jessica Harcourt, the star of the silent film For the term of his natural life, who was painted in miniature by Ada Whiting in 1925. 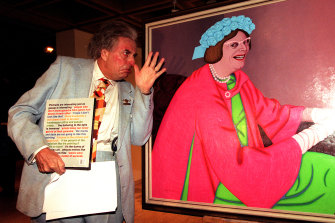 Sir Les Patterson in 1999 with the 1969 Archibald portrait of Dame Edna Everage.Credit:Steven Siewert

“The fact that someone like Jessica Harcourt, a celebrity in 1925 whom no one has ever heard of today shows you fame is fleeting. Celebrity can be very short-lived. But the portrait endures.”

1969: Barry Humphries in the character of Mrs Everage by John Brack

1977: Her Majesty Edna the First by Martin Sharp

2000: Are You With Me: Portrait of Sir Les Patterson by Bill Leak (Packing Room Prize winner)

2014: Well Dressed For a Sydney Audience by Rodney Pople