Melbourne is getting a new drive-in cinema – inside Jeff’s Shed.

Village Cinemas will operate the pop-up Drive In(Door) Cinema across 11 bays – with the dividing walls retracted – of the Melbourne Convention and Exhibition Centre from January 7 to 24. Because it is entirely indoors, the venue will be able to operate in all weather and in daylight hours. Up to five sessions a day are planned, with the first starting as early as 9.30am on a Sunday.

It will be the first such venue in Australia, though not the first in the world; the Filmweb Drive-in Kino outside Oslo opened in April. Originally slated for a two-week season, it is still operating. 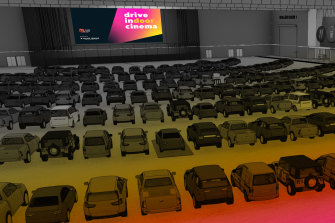 An artist’s impression of the Drive In(Door) Cinema at the Melbourne Convention and Exhibition Centre.Credit:

The drive-in will have space for 174 cars, plus food trucks. Entry is $49 per vehicle but, unlike a regular drive-in, patrons will not be able to reverse in and watch the movie with the tailgate up. Larger vehicles will be directed to the back, so patrons in smaller vehicles have decent sightlines to the screen. No alcohol will be permitted, and patrons will need to wear a facemask whenever they are outside the vehicle.

The programming will focus on the back catalogue, with the line-up set to include Back to the Future, Aladdin, The Breakfast Club, Clueless, Top Gun and Dirty Dancing, among others.

Check out The Watchlist for the next TV show, streaming series or movie to add to your must-sees. Sign up to get it every Thursday.

END_OF_DOCUMENT_TOKEN_TO_BE_REPLACED

END_OF_DOCUMENT_TOKEN_TO_BE_REPLACED
Recent Posts
We and our partners use cookies on this site to improve our service, perform analytics, personalize advertising, measure advertising performance, and remember website preferences.Ok