Home » Lifestyle » Morrison’s new tactic? A pledge to return things to the way they were

Morrison’s new tactic? A pledge to return things to the way they were

I was struck, last week, by a column in The New York Times about the benefits of paternity leave. Fathers who took leave were likely to be closer to their child later, and to stay married. The mental health of mothers was also likely to be better. And there were fascinating suggestions, from recent studies, that men’s brains changed after they became fathers, responding more to images of young children. This response was stronger if they worked fewer hours. 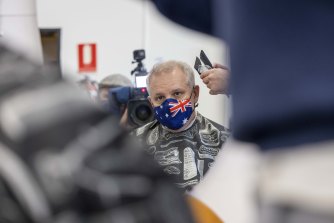 Scott Morrison on the campaign trail in Melbourne on November 9.Credit:Wayne Taylor

This is important and interesting in itself. But it is also an important reminder of something it is easy to forget in this period in which so many governments around the world seem stuck: the enormous power that governments have to change lives for the better. This is not just at some broad, statistical level, where we learn of incremental improvements to GDP (which can have important impacts too): change this policy and you bring parents and children closer together.

Remember the beginning of the pandemic? It was a strange, bleak time – but it was also oddly hopeful. The government began, almost immediately, to talk about a “snap back”, but there were many who hoped that the virus, awful as it was, might also provide an opportunity to question assumptions about the way our society had come to work.

As the virus spread, times became bleaker, but this hope increased, because of the brutal way the virus pointed to problems: the uncertain lives of insecure workers; cuts to public health; the dramatic inequities of class, race, geography – and that most basic of facts – the flats or houses we all live in.

Some changes came about, perhaps in unexpected ways. It is possible that the national reckoning with gender inequity early this year was driven, in part, by the frustrations many women felt with what the pandemic made even more obvious: the injustices they were asked to put up with both at home and at work. Mostly, though, little changed. Even where changes were made they were often small. The unemployment payment rose slightly – but we still expect people without jobs to live in poverty, just very mildly less poverty. 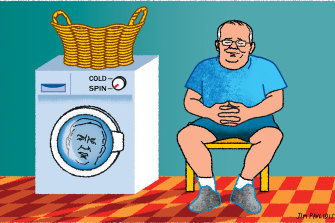 This feels newly important to recall because we seem to be at an inflection point in the way the pandemic is treated in political debate.

In the past fortnight, quite rightly, a lot of attention has gone to Scott Morrison’s habit of saying one thing and then its opposite, while pretending he has done no such thing. This is an important critique of Morrison as a politician. As I detail in my new book about Morrison, he seems to have an ability to completely block out both past and future.

But it’s important to recognise, too, that Morrison doesn’t particularly care about the incoherence that results. Even within a very short time span, what he says often doesn’t match. Last week, for example, he told this paper that most Australians believe, on climate, “‘yeah, we’ve got to deal with that. We’ve got to sort that. But can you just get on and sort it?’” But much of his week was spent saying almost the opposite: that governments should stop thinking they could sort it, get out of the way and let businesses do their thing.

Where Morrison is always coherent, though, is in the overall message he wants to impart. At the last election, he said contradictory things, but there was a consistent theme that floated over it all: he was the man for the status quo. And this was matched perfectly by the image he presented at every opportunity: an ordinary Australian who was immensely proud of Australia exactly as it was.

Morrison’s new argument on climate change, that he is for “choices, not mandates”, stems – as has been widely pointed out – from the idea that after two years of the pandemic people are sick of being told what to do.

There are three things to note. The first is that, at a time when Liberal MPs have likely had their confidence knocked by their leader’s missteps – and might be unhappy with his rhetorical shift on climate – Morrison has given them a traditional right-wing call to rally around.

The second is that Morrison is, in essence, offering a reprise of 2019 with a small twist: then it was stick with the status quo, now it is return to the status quo.

But the most important thing is the way Morrison has, again, found a way to block out the past: how thoroughly his new message erases what we all lived through the past two years. It seems, at first, to put the virus up in lights. Really, it says: let’s return to the way things were and pretend the last two years didn’t happen. It is as though we learned nothing; as though the problems that were revealed (at least to those who had been able to ignore them until then) were never there at all.

The pandemic showed us the ways that governments had failed us, largely through inaction: a failure to respond to a changing society, to recognise the inequities that were becoming greater issues. And it showed us, too, that governments that act can save lives. We might be sick of being told what to do, but most of us know that governments saved us, too.

There is a sense, recently, that Labor knows it cannot persist with its tiny-target strategy on policy much longer. But it is unclear, yet, whether Labor understands that, in opposition, policies are as much platforms as pledges. A prime minister speaks loudly, and can shape a debate with rhetoric alone. Opposition rhetoric usually only starts to land when it sits atop a foundation of policy. The greatest danger to Labor’s election hopes is that the Prime Minister, last week, got himself a big head start in shaping the way this country will talk about the pandemic that was.

Sean Kelly is author of The Game: A Portrait of Scott Morrison, a regular columnist and a former adviser to Julia Gillard and Kevin Rudd.

The Opinion newsletter is a weekly wrap of views that will challenge, champion and inform. Sign up here.