Ms Landry, a federal LNP member, said her remarks had been taken out of context, triggering a wave of abuse by members of the public in comments on the pages of Labor members of Queensland parliament. 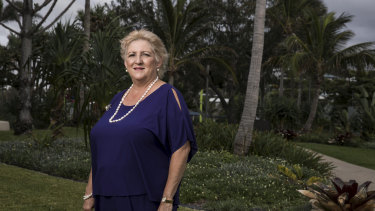 The LNP member for Capricornia in Queensland, Michelle Landry, says she has been subject to a wave of abuse in recent days.Credit:Dominic Lorrimer

She said she would not be bullied out of parliament but found the attacks “soul destroying”.

“I’m not putting up with it anymore,” Ms Landry said, adding her staff and family had also received abuse and death threats.

“The state Labor members let people run rampant,” Ms Landry said, without identifying them by name. “If I have stuff that talks about someone in a derogatory way on my pages, it gets deleted or hidden.”

“I was absolutely horrified when I saw that last night, I think that there is a real behaviour problem in this place and that we have to address it,” Ms Landry said.

“In saying that, the young fellow concerned, he was a really good worker and he loved the place and I feel bad for him about this. But it’s unacceptable behaviour by anyone.”

Her concern, Ms Landry said on Thursday, was not to attack someone who she believed was in a “very dark place” and potentially at risk of mental anguish or even self-harm if she joined in the attack.

Told of the comments on the day, Labor frontbencher Kristina Kenneally lambasted Ms Landry, saying she should instead have expressed sympathy for the building’s cleaners or the MP “whose desk was disrespected”.

Senator Keneally did not suggest mistreatment of women was constrained to one side of politics, or even to Parliament. “This is a society-wide problem, and I’m not so naive to think that any part of society is immune, and that includes the Australian Labor Party,” she said in the same interview.

Labor women, including Ged Kearney, Anne Aly, Deborah O’Neill and Susan Templeman, last week detailed the extensive abuse they are regularly sent or harassment in person, including highly offensive remarks directed to Ms Aly referencing her religion by labelling her an “ISIS whore”.

Greens Senator Lidia Thorpe has also described harassment by male government MPs, including repeatedly asking for dinner and putting their arms around her without permission.