Home » Lifestyle » My cat was part of my family, so don't belittle my grief at losing him

My cat was part of my family, so don't belittle my grief at losing him 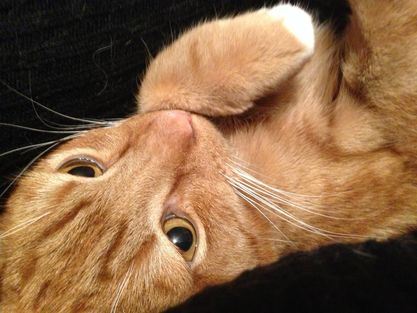 Cradling our beloved cat Butters as the life drained from his eyes and he let out a piercing death rattle is a memory that will stick with me forever.

My husband and I had taken him to the vet last week as we were concerned that a bite he had sustained was getting infected.

We were distraught when we were told that, actually, he was likely suffering from chronic kidney failure and that any measures taken would just be delaying the inevitable. It came as a total surprise – we’d noticed no signs that anything was wrong.

He’d been with us for a decade: my husband and I had been together for just two years when we got him and his sister Kairi from a shelter. They added so much to our household and helped us bond even further as a couple.

Butters was a huge part of our lives. We weren’t ready to lose him.

Grief for losing an animal isn’t always taken seriously – but it deserves to be treated with the same respect and sensitivity as the loss of any loved one.

He may just be a cat to everyone else but, to us, he was a beloved family member.

Butters was the first thing we saw every morning – he’d headbutt us awake each day – and he loved to disrupt my husband’s work by slapping himself down on his keyboard for attention. He could always tell when we were sad or ill, too – like a soothing blanket, he’d sit tenderly on us when we were hurting.

He was not just an animal. He was our baby, almost. We watched him grow, develop, create mischief, become affectionate and get into scrapes.

After returning from the vets, Butters quickly declined, almost as if he’d accepted the diagnosis and was deciding to let go. Within a day, he had stopped eating and drinking, his back legs were giving way and he was seeking solitude in private corners.

It became clear very fast that this was not going to get better and we took the heartbreaking decision to book him in to be euthanised. The only thing worse than losing a loved one is seeing them suffering needlessly.

Cats are very good at hiding chronic pain: it often presents itself in unobvious ways, like exhaustion and the loss of their vibrant personality. The helplessness of not being able to speak to your cat or be able to know how much pain they’re in is arduous. It makes the whole process even more horrendous.

After making the call, we wrapped him up in his favourite blanket and lay him down in bed. We talked to him and held him, so he knew he was not alone.

This is how he passed: at home, ten years to the very day we met him as a kitten. That was so very Butters – he always operated on his own terms. If you wanted to stroke him, you had to go to him and if he was being called inside and he wasn’t ready, he would just stare you out.

He was a very independent cat and I love that it feels like he decided when and where he went.

Some people have never had the richness in their lives of having a pet and it completely shows. Since we lost Butters we’ve had people say things like, ‘ten’s not a bad age for a cat’ and ‘which one was Butters again?’

One person even misread the situation so badly that they excitedly said to us: ‘Now you can start again with a new kitten!’ – as if it was like getting a new toy.

These people mean well, but just don’t understand how much we’re hurting.

We attended a family funeral three weeks back and just as many tears have been shed about both losses. You would never say, ‘ah, she was just your mum’ or ‘you can always have another son,’ to people grieving those losses. Please don’t be flippant about people’s pets, either.

Collectively, we need to start recognising that all grief is valid; there doesn’t have to be a hierarchy of importance when a death occurs. If we need time alone, time off work and time to cry, we should be given it without shame or judgement.

My husband and I have cried ourselves raw and spent hours reminiscing about him blocking the TV during the Line Of Duty finale, turning off the Playstation with his tail – mid boss fight – and the time he found himself trending on Twitter by answering soap spoiler questions for fans.

Feeling him flop after he passed and seeing the release of post-death gasps while his eyes remained open is a memory that I can’t shake off. But I know that will change.

All pet owners who’ve been through this know the agony of losing a pet and that there is absolutely no embarrassment or silliness in behaving like you have lost a relative when they die – because you have.

Don’t let any heartless remarks – deliberate or accidental – snatch away your right to grieve.

Many may have become disassociated with death after hearing the reports of losses to Covid over the past year and a half, but those who are grieving just one of those hundreds of thousands know that every single figure of the death toll is destroying a family beyond belief.

Butters is now in his resting place in a lovely spot in our back garden, where we have planted wildflowers. He is wrapped in his favourite blanket and has a box of his favourite treats with him. We visit him to say ‘goodnight’ each evening. We won’t stop missing him.

Of course, when we let an animal into our hearts, we know we are opening ourselves to the eventual pain of losing them. It’s a powerful, gut-wrenching agony, no different to losing anyone else we love. However, in return for the ten beautiful years we had him in our lives, it’s an heartache worth enduring.

We are left with his sister Kairi, an incredibly affectionate and beautiful cat. She stands by his grave with us each evening and has been incredibly clingy since. It feels, though, that this is for us more than for herself.

We have been asked if we will get another cat, but Butters can’t be replaced.

He will always be a part of us, like everyone we have lost and will lose. And he deserves that place in our hearts.