It all began on a rainy day in the centre of Canterbury.

I was waiting patiently in line at Costa to grab my usual cappuccino, when this handsome guy started chatting in the queue with me…

At the time I was flattered, but years later I have had to face the truth that Kyle chats with anyone!

‘Forced’ to sit together in the packed coffee-shop, we ended up swapping numbers and, some months later, arranged to meet for a drink in Rochester. When he was 15 minutes late, and I called him, he told me he was ‘just parking the car’.

Years later, he confessed he was just leaving the house – it turns out ‘just parking the car’ would be an excuse he’d use countless times over the years – but I’m so pleased that I waited around for another 15 minutes.

Because despite his dreadful time-keeping, he is one of the most reliable, hard-working, loving men I’ve ever met. Nothing is ever too much trouble for Kyle.

Our life, even back in the early days, was full of joy. It was the typical 30-something routine, involving meals out, trips abroad, coffee and pastries for Saturday breakfast. Life was pretty good.

We both wanted a family, but options were limited. Despite a couple of well-meaning friends who put themselves forward to be our surrogate, we couldn’t contemplate this, knowing how many vulnerable children were languishing in the care system, just waiting for a home.

So when I saw an advert in the local paper from a boy who was looking for a ‘forever home’, I applied immediately, then called Kyle to tell him what I had done.

His excitement was easy to recognise over the phone.

He started to ask questions, wondering what the boy in the advert looked like, sounded like, what he liked to do. And finally he asked what his name was.

To celebrate 50 years of Pride, Metro.co.uk has teamed up with Kyiv Pride to raise money for their important work in Ukraine.

Despite war raging around them, Kyiv Pride continue to help LGBTQ+ people, offering those in need shelter, food and psychological support.

We will be splitting the cash with a grassroots charity closer to home.

You can donate here

As a result of answering that ad, Haydn came along. Six years old, with cerebral palsy and a wheelchair, he was full of sadness and questions. He was the first child we fostered, and after a couple of years, became the first one we adopted, too.

Over the next few years, we realised we were not particularly good foster carers – we kept adopting the children that were meant to stay just for a short time.

Curtis, or Curly as we call him, came along after Haydn when he was just 12 weeks old. He has a range of complex needs and was never expected to even reach his first birthday.

Our girls, biological sisters Bella and Phoebe, came along together to complete the set. Bella has Downs Syndrome and Phoebe is ‘mainstream’, but their bond is a true wonder to see. How could we ever ‘give them back’ or allow them to be split up? 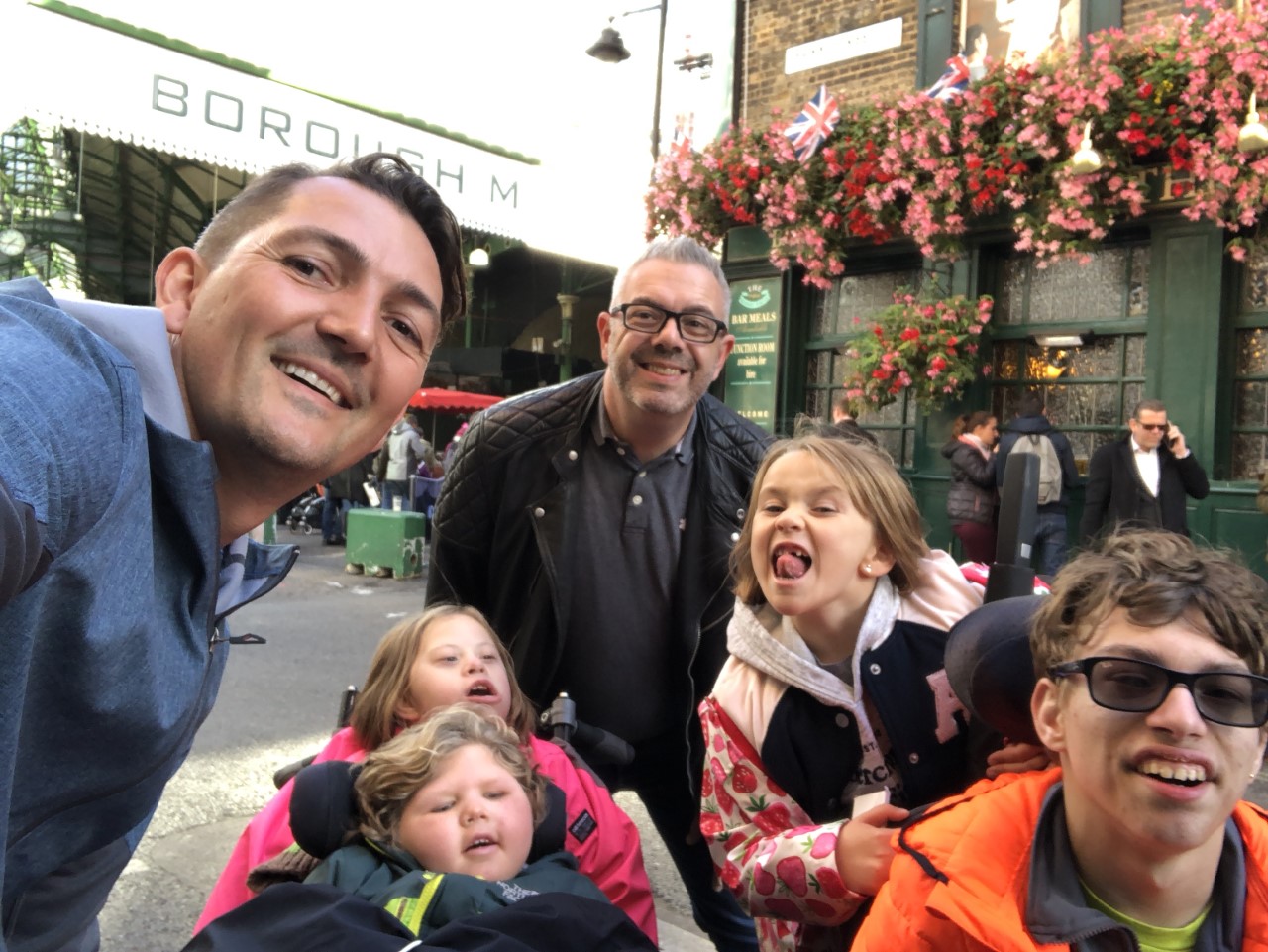 Two dads who didn’t know what the hell we were doing, with four awesome children, full of hope and buckets of love to give.

Looking after four children who had been adopted might have been hard enough, but with three of them living with severe and complex disabilities, the job was certainly a lot tougher still.

We both coped in different ways. I would need to talk and talk. Kyle would go silent, working out a game plan in his head, only sharing once it was fully formed. However, we always stood united, holding each other up on the days when a clear way forward was difficult to see.

Even today, as the six-year-old who entered our lives is now 18, our hearts swell with pride at how fun all four of them are. Proud that they love life. Pride at their determination to seize every opportunity.

Pre-lockdown, our friends and family thought us mad as the six of us boarded a train, ending up in Amsterdam for four days of eating ice cream on the street, taking canal boats and generally watching the world go by.

The kids’ high level of need never stops us doing anything. However each trip requires very careful planning. Curly’s reliance on oxygen, as well as a blended diet (fed by a tube in his tummy), enough pads (nappies) for three of our four children who are doubly incontinent, and enough meds to open our own local pharmacy, means that we never travel light – but the planning and the few extra bags are always worth it.

Now our lives have changed again. I’m now a school leader running a group of primary schools as their CEO, and Kyle is the Head of Curly’s Farm, part of Curly’s Legacy – a charity we started together in 2019, in the name of our youngest son.

Curly has serious life-limiting conditions and we wanted to ‘future-proof’ his memory by starting something that he could be proud of.

Curly’s Farm is a place of sanctuary for many youngsters. It is a working farm with a carefully chosen staff team of adoptive parents, those with children with special needs, or those staff that have been part of the care system themselves.

Children and young people might come just once a week, or more regularly, depending on their level of need, but when they return home, they always leave the farm feeling supported and challenged and cared for.

Their hands are dirty, their boots full of mud and worse – each one knowing they have taken full responsibility for the jobs that take place on every farm up and down the land – feeding, cleaning, shearing, grooming, calving, lambing, and much more.

As we enter the month of Pride, it is fitting that as two dads, we are so proud of the achievements of our children. But there is a growing group of children and young people, who attend Curly’s Farm, that we are equally proud of.

Like Boo, a young man who arrived at the farm on ‘day release’ from school, who now works full-time at Curly’s. Or Frankie, a young person who is deaf and blind, and has discovered absolute joy and wonder by working with the animals – gaining a connection with humans as much as the pigs, sheep and goats he helps to look after.

I want to explain that our life is pretty tough. Right now, as I write this, Curly and Kyle are in hospital. Curly is fighting a serious infection, and of course, Kyle won’t leave his side – so I’m at home with the other three, trying to reassure them that everything is going to be OK. This is our norm.

At some point, everything might not be OK – like, for example, if Curly gets some horrid infection that he just can’t fight. How do we cope with this constant worry?

By standing side by side, dads and kids alike, always grabbing the excitement of life and the next challenge with both hands – even when myself and Kyle are frantically working through a hundred different scenarios in our head, to keep life as normal and as settled as possible for our wonderful tribe.

Because of Curly’s Farm, I often see life through a different lens to Kyle – especially when as well as trying our best to keep four children alive, I often arrive home to find a baby goat or even a few piglets in the kitchen, who just need that ‘extra bit of love and care’ (apparently!).

I have the utmost admiration, respect and love for my husband who not only takes his responsibility as a father and children’s charity head incredibly seriously – but also his capacity to open his (our) home to half the farm infants, too.

But with the tough comes the beauty – and I can’t begin to describe how privileged our lives are – totally enriched, not only because of the life we have with our children, but how we’ve been able to share just a little bit of our own children’s determination, resilience and pride with hundreds of children that are now able to call Curly’s Farm a home from home.

This year marks 50 years of Pride, so it seems only fitting that Metro.co.uk goes above and beyond in our ongoing LGBTQ+ support, through a wealth of content that not only celebrates all things Pride, but also share stories, take time to reflect and raises awareness for the community this Pride Month.

And we’ve got some great names on board to help us, too. From a list of famous guest editors taking over the site for a week that includes Rob Rinder, Nicola Adams, Peter Tatchell, Kimberly Hart-Simpson, John Whaite, Anna Richardson and Dr Ranj, we’ll also have the likes Sir Ian McKellen and Drag Race stars The Vivienne, Lawrence Chaney and Tia Kofi offering their insights.

During Pride Month, which runs from 1 – 30 June, Metro.co.uk will also be supporting Kyiv Pride, a Ukrainian charity forced to work harder than ever to protect the rights of the LGBTQ+ community during times of conflict. To find out more about their work, and what you can do to support them, click here.