A Senate move to veto changes to renewable energy investments has heightened an internal Labor row over climate policy, with outspoken backbencher Joel Fitzgibbon slamming the decision to side with the Greens.

Mr Fitzgibbon said many Labor supporters disagreed with the move on Tuesday night to strike down a government regulation that would change rules at the Australian Renewable Energy Agency (ARENA) that limit its investments. 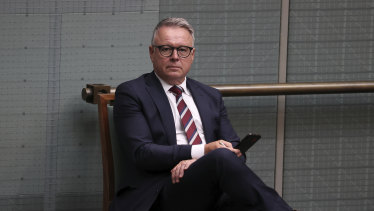 Joel Fitzgibbon has criticised his own party again.Credit:Alex Ellinghausen

Greens leader Adam Bandt hailed the outcome in the Senate as a victory against fossil fuels because it would prevent the government allowing ARENA to invest in carbon capture and storage, a technology that can support coal and gas projects.

But the government said it wanted to increase the agency’s funding by $192.5 million and expand its remit so it could support “clean technology” including carbon capture and storage, which aims to store emissions underground.

Mr Fitzgibbon said Labor was wrong to object to the changes and should back the investment boost when all kinds of technologies needed to be supported to reduce emissions.

“We shouldn’t be picky. It’s not just about windmills and solar panels,” he told radio station 2GB. “It’s about all sorts of other innovation, including electric vehicle charging station roll outs, and improving the efficiency of heavy vehicles and capturing the carbon so that we can use gas and coal to generate energy without polluting the atmosphere.”

“All these things will make a contribution. And we shouldn’t be fighting about which innovations we choose, we should be using as many of them as we can.”