Tyson Fury’s wife Paris hit back as a fan who accused her of using a ‘nanny to bring up her children’ yesterday in a furious online message.

The mother-of-five, 30, from Morecambe, shared a comment on her Instagram Stories on Monday after a fan accused her of using ‘nannies to bring up her children’ and saying there was ‘no way’ she could bring up her kids and ‘dress nice.’

Paris, who is a mother to Venezuela, 10, Prince John James, eight, Prince Tyson II, four, Valencia, three, and Prince Adonis Amaziah, 12 months, responded: ‘I don’t have a nanny or cleaners. I look after my own children day in day out!’

The comment comes days after the WBC champion, 32, shared the happy news that the couple are expecting their sixth  child together. 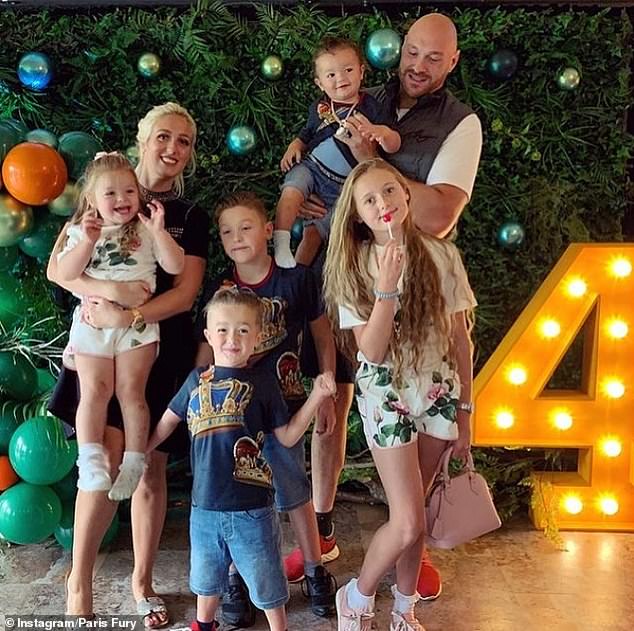 Tyson Fury’s wife Paris has hit back as a fan accused her of using a ‘nanny to bring up her children’ (pictured, with Venezuela, 10, Prince John James, eight, Prince Tyson II, four, Valencia, three, and Prince Adonis Amaziah, 12 months,)

The comment from one of Paris’ followers read: ‘Congratulations to them both but nannies bring kids up, like many who can afford to do so.’

‘If she was 100 per cent being mum, as much as you love your kids, you never have time to put lippy on or dress nice, hair nice etc.

‘Running around after small children is hard work, unless you let your kids go feral, so you can spend half a day looking half decent.’

They continued: ‘And no way would you be near kids and food in nice clothes. They have nannies and cleaners.’ 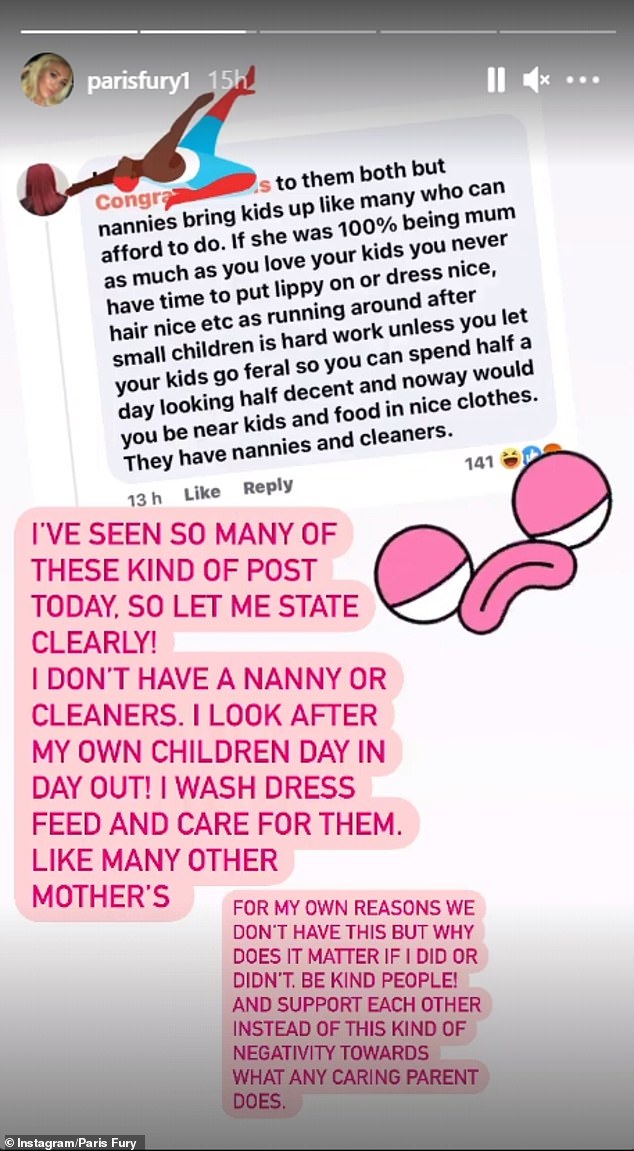 The mother-of-five responded to the comment on her Instagram Stories on Monday, as she said that she looks after her own children every day

Screenshoting the comment and putting it on her Instagram Stories, Paris responded: ‘I’ve seen so many of these kind of post today. So let me state clearly!

‘I wash dress feed and care for them. Like many other mother’s.’

She added: ‘For my own reasons we don’t have this but why does it matter if I did or didn’t. Be kind people! And support each other instead of this kind of negativity towards what any caring parent does.’

Her comments come days after Tyson revealed his wife is expecting their sixth child together while appearing on a boxing correspondent Gareth A Davies’ YouTube series. 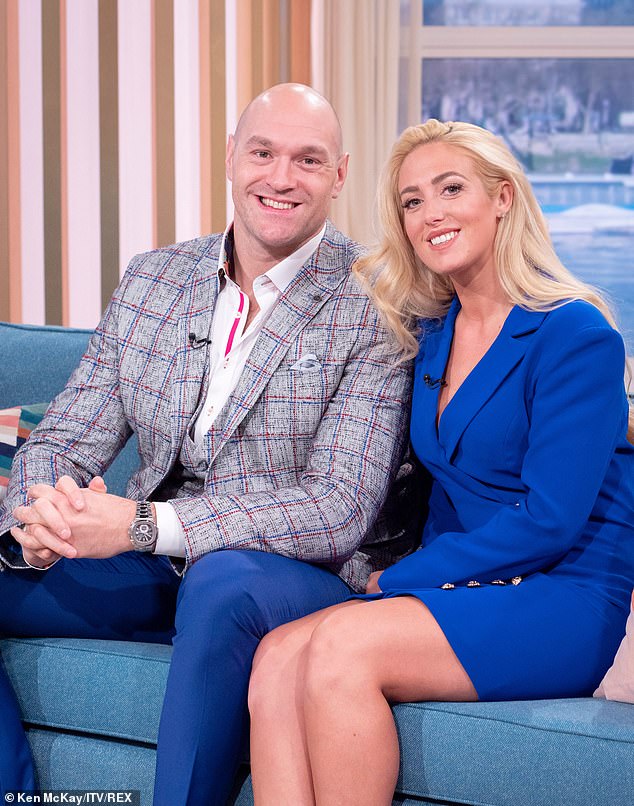 Parents: Her comments come days after the WBC champion revealed they are expecting their sixth child together (pictured together in March 2020)

Tyson revealed the news while gushing about his family values, telling Davies: ‘Paris is pregnant again and the Lord has blessed us definitely with another child and I’m very thankful.

‘Got a beautiful wife, beautiful kids, they’re all healthy. That’s the most important thing, you know, your health and your family.

‘Nothing else really matters. Your job, your money, your wealth, your career, none of that really matters because you can get another job, you can start snooker or you can go make more money.

The proud dad, who is the highest-paid fighter of 2020 with £46million in earnings, also spoke about how he and Paris are raising their children to understand the value of money. 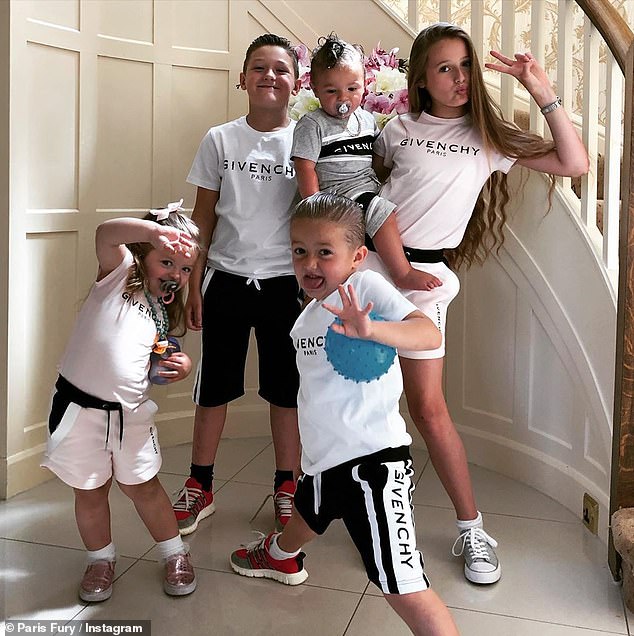 ‘For me it’s very important to stay close to my grassroots as I’ve got a lot of kids coming up, I’ve got five kids, very important for them to know the value of money,’ he explained.

‘It’s very important for them to know how to earn money. So, if they see me splashing out all the time and living a move stars’ lifestyle they grow up thinking that’s the only way they can live.

‘To earn from a normal job, £200-300-a-week, however much they’re going to get, they might think that’s no good if they’ve been spoiled rotten by multimillionaire parents.

‘So I don’t do that. My kids don’t go to private school, I don’t have any private education, they just go to normal school, everyone does normal stuff.’

Paris, who shares a sprawling family home with Tyson and their children in Morecambe, has been forging ahead with her own career over the past year, landing a role as a panellist on Loose Women last year.

During an appearance on the show in September Paris revealed she and her husband are ‘on the fence’ about letting their oldest daughter Venezuela go to secondary school.

The couple want to raise their children with a traditional gypsy lifestyle. Both Paris and husband Tyson left school at 11-years-old, and her oldest daughter Venezuela is studying to undergo her 11 plus exam.