Scott Morrison showed his true colours on state lockdowns with his initial refusal to offer additional federal help to Victorians who suffer from their government’s sweeping pandemic controls.

The Prime Minister does not want federal taxpayers to carry the cost when a state imposes the most extreme measures to stop infections. 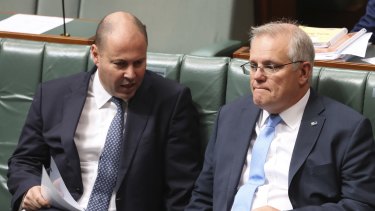 Unwisely, Scott Morrison (right) and Josh Frydenberg chose to rebuff Victoria’s initial request for funding help and only devised a policy in the glare of publicity.Credit:Alex Ellinghausen

Morrison backed down on Thursday by offering a $500-a-week disaster payment but made it clear he will not set up a large funding mechanism to encourage more lockdowns.

This leaves him exposed to attack for being too slow to see that Victorians needed urgent help and only coming up with a begrudging form of assistance. “What took you so long?” asked Labor leader Anthony Albanese in Parliament.

Unwisely, Morrison and Frydenberg chose to rebuff the state’s initial request and only devised a policy in the glare of publicity.

The policy, however, makes sense. While it sounds easy to revive JobKeeper during a lockdown, the wage subsidy was calculated on long-term falls in company turnover and is not made for snap restrictions. The usual form of income support, JobSeeker, does not work for people who have a job but are forced to stay at home.

So the temporary COVID-19 disaster payment is a good approach. The catch is in the way Morrison will keep control of who receives cash.

This is a payment for premiers who impose local lockdowns rather than resorting to blanket closures. It encourages the approach taken by NSW Premier Gladys Berejiklian when she asked people to stay at home on the northern beaches of Sydney last summer and discourages leaders such as Merlino from keeping everyone at home across the state.

It does this by only making a payment when the Commonwealth chief medical officer decides a local area is a “hotspot” with significant cases and transmission. Payments go only to workers who live or work in these areas.

Tension between a prime minister and premier is built into this structure. If a premier imposes restrictions statewide but the Commonwealth decides the “hotspot” is only in the capital city, workers outside the city will not qualify for federal help.

There is an early sign of this problem. The federal government has decided Greater Melbourne is a hotspot, which means payments will flow to those in need in the city. But the state government continues to restrict some businesses in the regions.

A gym in Mildura, for instance, has to stay closed. Its casual workers could be on their own if they lose income. Liberal backbencher Russell Broadbent rang the alarm on this problem on Thursday night.

This is not a bug in the system – it is a feature. Morrison wants to discourage states from imposing restrictions outside hotspots.

Those who already dislike Morrison may never forgive him. He has made a calculation, however, that some voters are frustrated with state leaders who leap into statewide lockdowns so easily. Whether this helps or hurts him at the next federal election is just one of many political gambles in the pandemic.

In the meantime, some workers in regional Victoria are lost in the crevasse between sweeping state restrictions and limited federal help.