Power prices will fall for hundreds of thousands of people from July 1 as energy generation costs continue to fall.

The default market offer for NSW households will fall by $102 a year, $116 in South Australia and $53 in south-east Queensland. 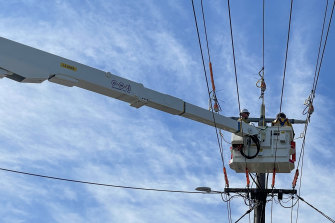 Retail power prices are set to fall following a determination by the Australian Energy Regulator to reduce the default market offer for NSW households by $!02 a year. Credit:Paul Rovere

The Default Market Offer is a cap on prices retailers can charge customers. While many retailers also have cheaper deals, there are 727,000 electricity customers on a standing offer in NSW, Queensland and South Australia who will benefit from the rate reduction. Victoria is not covered by the determination and sets its own default market offer.

The reduction comes on the back of falling wholesale electricity costs, which make up around a third of household energy bills. In Victoria, wholesale prices fell 68 per cent, from $79 per megawatt-hour in the first quarter last year to $25/MWh for the same period this year. NSW prices fell 55 per cent over the same time, from $86/MWh to $38/MWh.

The Australian Energy Market Operator said a mild summer, combined with increased rooftop solar, resulted in the lowest demand across the national energy market in the first quarter of a year since 2002.

The low demand and volatility in the market have also reduced demand for gas-generated power this quarter, representing the lowest figures since 2005.

Australian Energy Council chief executive Sarah McNamara, who represents energy retailers, said only 9 to 12 per cent of household customers were billed via the default market offer, largely because “retailers offer much cheaper deals to customers who shop around, rather than settling for the price set by the regulator”.

“Getting a cheaper deal is easy – speak to your retailer or use independent comparisons through the government’s Energy Made Easy website,” Ms McNamara said.