Reinventing Tanya: The one discordant note in Albanese’s reshuffle

There’s nothing like a ministerial reshuffle to expose what an unpredictable and unforgiving game of snakes and ladders politics can be. As a prime example, look no further than Tanya Plibersek.

For six years, the popular frontbencher had been laying the groundwork for the things she wanted to achieve in education, meeting stakeholders and working up ideas on how to get better returns on the $40 billion-plus the commonwealth will outlay on schools and higher education this year.

So it came as a shock to the sector and a surprise to many in the Labor movement when Prime Minister Anthony Albanese unveiled his ministerial line-up last Tuesday and announced Plibersek would be installed as minister for the environment and water (with a budget of about $1.8 billion). 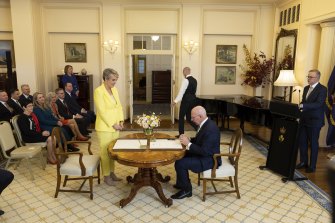 Tanya Plibersek is sworn in as minister for the environment and water by Governor-General David Hurley Credit:Alex Ellinghausen

Plibersek, according to several party sources, was blindsided by the move, although she was quick to announce to her 320,000 Twitter followers she was “delighted” with her new job and couldn’t “wait to get to work”.

Keen eyes noticed she’d also been stripped of the women’s portfolio, another of her responsibilities in opposition, which has been handed to finance minister and close Albanese ally Katy Gallagher. Jason Clare, one of the party’s stars during the election campaign, has emerged with the prize of education.

Was this a demotion for Plibersek? A number of those inside Labor – as well as the federal press gallery – are seeing it that way.

Consider a few facts for context. After Albanese, Plibersek is the second longest-serving federal parliamentarian in the 30-strong cabinet and outer ministry. (He first got elected in 1996, she in 1998). She served as deputy leader through six long years of opposition – one of the toughest jobs in politics. She’s been a trailblazer for women in the party and is consistently one of its best performing and most recognised frontbenchers. It might have been a more generous look, given this history, to have let her remain in the portfolio she was expecting to occupy.

Albanese will argue he had good reasons for the move. He can point to the fact that circumstances changed after the election when Labor frontbencher Terri Butler (who most recently held environment in opposition) lost her seat to the Greens in the Brisbane electorate of Griffith. He had a vacancy to fill – but there were others who could have filled it.

Asked by journalists to explain his thinking on the night he unveiled the reshuffle, Albanese said Plibersek had “a long-term interest in the environment”, that she had been “very happy” to take it up, that there were “major challenges” in it and that she would be “outstanding” in getting to grips with delivering the Murray Darling Basin plan (a fiendish challenge) and a range of other environmental reforms.

Albanese has left himself open to the impression that he is clipping the wings of a one-time potential leadership rival.

But the very public rebuke he’d administered to her several days earlier – for comparing new opposition leader Peter Dutton to the Harry Potter villain, Voldemort – has coloured the optics.

Albanese has left himself open to the impression that he is clipping the wings of a one-time potential leadership rival. In a ministerial line-up that’s otherwise been widely praised for its freshness and diversity, it’s his one controversial move.

For her part, 52-year-old Plibersek says she’s looking forward to making her mark in a portfolio she believes has elevated importance after an election result that saw record gains for the Greens and for climate activist teal independents.

“One of the big messages from the election is that Australians want to see more action on the environment and climate change – I couldn’t be more excited to play a part in leading that work for the new Labor government.”

She says she’ll be building on a “significant Labor legacy” which includes creating the Great Barrier Reef Marine Park and protecting Antarctica, the Franklin River, the Daintree and Kakadu.

“When the prime minister offered me this portfolio, he said the environment and water will be top priorities for our government. That’s a refreshing change after a decade of the Liberal Party not giving a stuff about either,” she added.

“I have had so many different portfolios over the years and every one of them has been exciting and interesting and a challenge … and I relish the opportunity to do that again in a new area.”

“One of the big messages from the election is that Australians want to see more action on the environment and climate change.”

Just how much of a role Plibersek will have in shaping the government’s climate change responses is debatable, given Chris Bowen retains primary carriage of this in his capacity as climate change and energy minister. She and Bowen will be sharing a newly merged department, to be known as the Department of Climate Change, Energy, Environment and Water.

But there are major challenges on her side of the portfolio given critical threats to native species and habitats. Wrangling a fresh accord among the state, regional and sectoral interests competing for water – which will again become a fiercely contested resource once the weather cycle turns – will also be vital work.

Trying to penetrate the inner labyrinth of factional and personality politics inside Labor is akin to Kremlinology, and probably, to most people, about as interesting. Suffice to say Plibersek is not of Albanese’s inner circle, despite their long association in the same sub-faction of the NSW left, and the fact that their electorates adjoin one another in Sydney’s densely populated inner west and inner east.

During the election campaign, eyebrows were raised when she was not among the Labor frontbenchers invited to travel to Perth for the party’s triumphal launch on May 1. Determined to hose down speculation as to why, Plibersek declared that she had known Albanese (who is 7 years her senior) since she was 14 and that their relationship was “terrific”. He praised her as “an outstanding member of my team.” The party’s headquarters continued to keep her busy with visits to 31 electorates and some 60 media appearances.

History between the pair is coloured by the tense dynamics around the party’s 2013 and 2019 leadership changes.

In 2013, after losing government, Labor held its first-ever leadership contest in which grassroots party members were given a 50 per cent say in the ballot. The two contenders were Albanese and Bill Shorten, who hailed from the party’s Victorian right faction.

It was going to be a tight contest but Albanese, popular among members, was confident of a win.

Shorten, however, made it known before the ballot that he would seek to have Plibersek as his deputy. Plibersek was campaigning for fellow left-winger Albanese but also made clear she would be happy to serve as deputy under either Albanese or Shorten.

This was widely seen in the party as a boost to Shorten’s campaign. In the subsequent ballot, Albanese won the popular party vote but Shorten narrowly prevailed with more votes in the caucus, including some who defected to his camp from the left.

When Shorten lost the 2019 election, Plibersek briefly signalled her interest in succeeding him as leader before abruptly changing her mind, ostensibly on the grounds of putting her family’s needs first. She has three children with husband Michael Coutts-Trotter, who heads NSW Premier Dominic Perrottet’s department.

In a statement at the time, she said: “I have support, from across the party, to be elected leader … But now is not my time”. The reality, insiders say, is she did not have the numbers.

“The problem for Tanya is that she does not have the institutional support of the left,” says an insider “despite the fact that she has considerable public following and is remarkably popular in the party membership”.

The environmental movement, however, is thrilled to have such a high-profile Labor figure in their corner.

The CEO of the Australian Conservation Foundation (ACF), Kelly O’Shanassy, says Plibersek is someone who “can get things done, she is incredibly experienced and well respected. It shows the government is taking the portfolio seriously”.

Midnight Oil frontman Peter Garrett has weighed in behind Plibersek on Twitter, saying “After a decade of gross neglect…we need a senior minister of the calibre of @tanya_plibersek to reset and she’ll need strong support from cabinet.”

Garrett is a former ACF president who also served as environment minister in the Rudd and Gillard governments before (ironically) being promoted to the education portfolio himself. His public support for her appointment will carry weight inside Labor.

Those who know her well say Plibersek will give her new portfolio her all.

“She is seeing the change in a positive way, she is not sitting there wallowing or anything like that” one Labor insider says. “I know being back in government now is the main thing for her … and there are opportunities there.”