His bark really IS worse than his bite! Sassy dog named Diesel goes viral after being filmed ‘talking back’ to his owner, telling her to stop working and demanding he be allowed to ‘hunt’

A sassy dog has become a viral sensation after videos of him appearing to ‘talk’ back to his owner left thousands of TikTok users stunned.

Diesel, an eight-year-old Alaskan malamute who lives with his owner Allie Piro, 24, in Michigan, has proven time and time again that his bark really can be worse than his bite by ferociously arguing his case whenever things don’t go his way.

In a recent video uploaded to the pooch’s TikTok account – which boasts an impressive 854,300 followers, Diesel can be seen chatting to his owner in a snarky tone while she is working from home, with the video racking up over 6.3 million views and over 2.1 million likes.

The clip is one of dozens in which Diesel seems to be ‘talking’ to his owner, making snide remarks and demands, from insisting that Allie needs to stop working sooner to stating that he is hungry and must be fed. 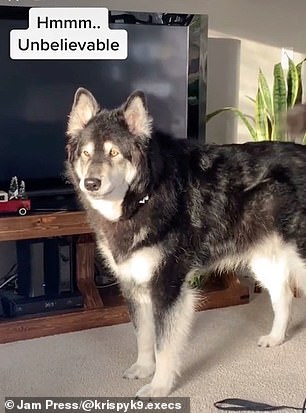 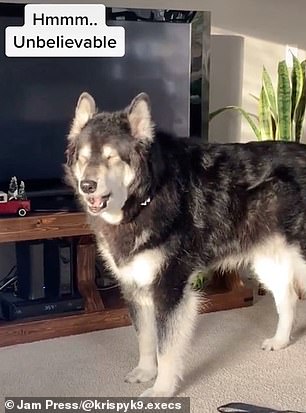 Paws-itively incredible: An eight-year-old Alaskan malamute named Diesel has earned viral fame after his owner started posting videos of him ‘talking’ back to her Say what? In clips posted on TikTok, Diesel appears to be arguing with his owner, Allie Piro, 24, from Michigan, with one showing him furiously shutting her down about her work schedule

‘I have like an hour and a half left of work,’ Allie tells Diesel in the clip.

The sassy dog then whines at his human, appearing to be upset and ‘talks back’.

This is apparently a regular occurrence, as another video shows Diesel knocking on a glass door angrily and whining to Allie like an annoyed ‘teenager’.

The clip has garnered more than 13,000 comments and users can’t get enough of the dog’s hilarious behavior.

One person said: ‘My husky does that same angry knock.’

‘I love the angry knocks bro,’ another fan said.

‘This dog literally speaks English,’ someone else said.

One person described the pup as a ‘human trapped in a dog body’ thanks to the realistic conversation.

‘It’s so funny how she knows what he is saying,’ someone else commented.

Another viewer even said the bog speaks better English than them, while someone else agreed they could understand and hear him ‘perfectly’.

One person even felt the clip was proof of reincarnation, thanks to the dog’s human-esque garble.

Another person added: ‘I don’t think that’s a dog.’

‘In the videos he’s doing what he does best, chatting away,’ Allie told Jam Press.

‘My reaction to him talking is just that I always laugh or chat back.

‘I’m so used to it because he’s been doing it for eight years.

‘He’s the sweetest dog but gets so sassy when he wants something.’