The actress claims her grandmother would lock the girls in a room with their grandfather where he would molest them.

Sharon Stone revealed harrowing details of her childhood in her new memoir “The Beauty of Living Twice.”

One of the more disturbing accounts involves the alleged sexual abuse of her and her sister, Kelly, by their maternal grandfather, Clarence Lawson. 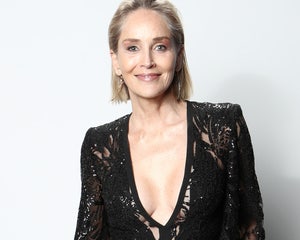 According to the star, her grandmother, who was also allegedly abused by Lawson, would facilitate the abuse by locking the sisters in a room with their grandfather when they were toddlers. After he died from a heart attack when Stone was 14, she said she walked up to the casket at the funeral to make sure he could never harm her or Kelly again.

“I poked him, and the bizarre satisfaction that he was at last dead hit me like a ton of ice,” she wrote. “I looked at [Kelly] and she understood; she was 11, and it was over.”

The “Casino” star also claimed her father, Joseph Stone, was physically abusive as well, saying he would “yank me down with him or throw me down in front of him.”

“I was dragged through the kitchen to the basement to get the crap strapped out of me with a belt,” she added. “It continued until I was so sure I didn’t do what I was being punished for that I lost all fear, all concern — in fact, all feeling. I simply saw my father as weak. He yelled for me at the bottom of the stairs to come down.”

“I walked up to him and said, ‘What’s the matter — do you need to hit me some more to feel like a man?’ I was 14. He started to cry. I told him I didn’t love him. That I had never loved him. That I would never love him. I was so cold, so still,” Stone continued. “He was so heartbroken. He never hit any one of us again. I was free. From them both. From then on, I was my own guide.”

While Stone wrote she has “love” and “respect” for her father now, she also said her relationship with her mother was strained too. Stone wrote that she had to “meet my mother as a person, separate from my childhood experiences and judgments of her, and know her from an adult perspective.”

“For now, I am able not only to receive love from my mother but to love my mother in return,” she continued. “I don’t need to know what she knew or blocked out to survive. I don’t need to forgive her, or save her, or help her heal, or get her to help me, I am grateful that we both made it here. I respect her for that. She respects me for that. We can look each other in the eye.”

“Today, my mother and I are at the beginning of our relationship,” she added. “Never have understood her and certainly never have had the opportunity for her to mother me now that I’ve entered my 60s and my mother is in her mid-80s.”

However, Stone said she harbors no ill will towards her mother.

“I am unashamed, I am unblemished, I am pure in my heart and in my soul, I am not bitter, I am not sad, I have no need to be washed clean, I am not angry, I am not here to punish you.”