Speaker Tony Smith to quit Parliament at next election

The Speaker of the House of Representatives, Tony Smith, will leave Parliament at the next election in a surprise decision after a rare tenure in the position over more than two terms.

Mr Smith, who replaced Bronwyn Bishop as Speaker in August 2015, told constituents on Wednesday he would not contest the next election after holding the seat of Casey, in the eastern suburbs of Melbourne, for two decades. 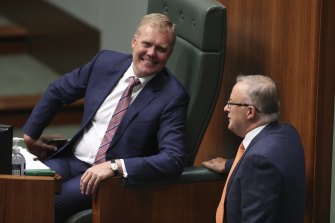 “After a great deal of thought and consideration, I have decided that this term as a Member of the House of Representatives will be my last,” Mr Smith said in a statement on Wednesday afternoon.

“I love our Parliament and serving the Australian people. I am honoured that the Liberal Party and the electors of Casey voted to give me this privilege for two decades.

“However, I believe now is a good time to give the Liberal Party and the people of Casey the opportunity for renewal.

“I also believe the time is now right for me to pursue other endeavours following the conclusion of this forty-sixth Parliament.”

Known by some journalists for answering media inquiries with five words – “off the record: no comment” – Mr Smith came to Parliament House as a press secretary to then-treasurer Peter Costello in the 1990s.

He entered Parliament in 2001, held his seat in the swing to Labor in 2007 and gained a position in shadow cabinet ahead of the Coalition’s return to government in 2013.

Left out of the ministry by former prime minister Tony Abbott, he gained election as Speaker after a media storm over Ms Bishop’s use of taxpayer funds to pay for a helicopter flight to a Liberal function.

Unlike his predecessor, he was reluctant to eject MPs from the House and regarded as fair in applying the rules.

The approach won him praise from all sides of Parliament and was a factor in continued support for him as Speaker over three Parliaments, a rare occurrence. He was re-elected as Speaker in August 2016 and July 2019.

His confirmation in the job after the last election came despite decisions that did not always help the Coalition, such as his handling of the historic defeat to Prime Minister Scott Morrison and the government in February 2019 on a bill to evacuate refugees to Australia for medical treatment.