Check out what’s clicking on FoxBusiness.com.

Customizing beverages at Starbucks just got a little bit harder thanks to a plethora of TikTok users.

Baristas working for the Seattle-based coffee chain are reportedly getting hit with complex orders that aren't even on the menu – and in some cases, it's causing quite the headache.

They're coming from trending videos on TikTok where users have been creating their own concoctions and listing out the ingredients for others to order for themselves the next time they stop by a Starbucks location.

Some of these creations have been dubbed, the "TikTok Drink," the "PB and J," the "Cinnamon Toast Crunch" and the "Edward," according to New York City-based Starbucks barista Marcelle LaBrecque.

"It was the beginning of the end when customers began coming into our store asking for a Venti Iced White Mocha with Vanilla Sweet Cream Cold Foam and Extra Caramel Drizzle, doting it the "TikTok Drink," LaBrecque told FOX Business.

Shortly after, LaBrecque began seeing a viral picture of a drink ordered by "Edward," which LaBrecque says "would have made any sane barista refuse to even touch this order." 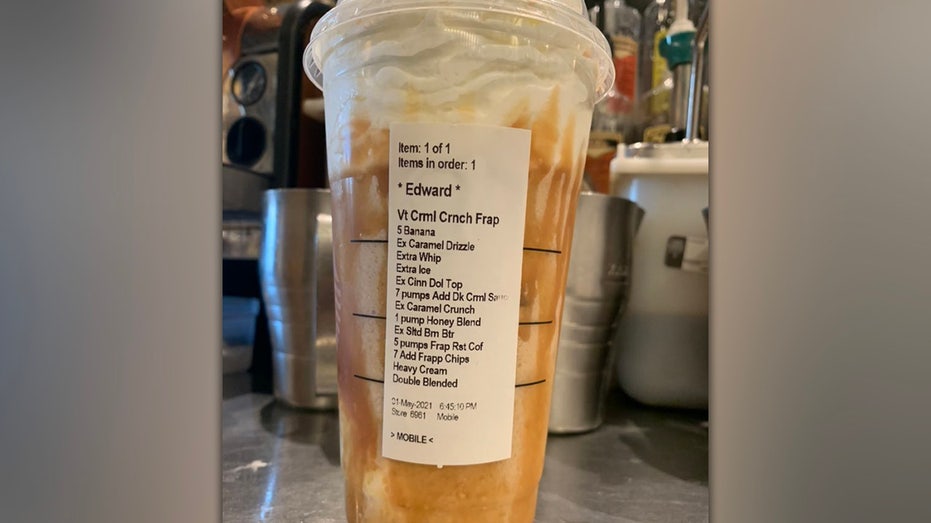 A Starbucks drink sometimes referred to as the “Edward” (Twitter/@ProjectJosiee)

A tweet by @ProjectJosie shows the complex order which includes over a dozen steps.

GET FOX BUSINESS ON THE GO BY CLICKING HERE

The complex orders, according to LaBrecque, have caused "quite a backup in our production and ability to bring out orders within a timely and effective manner," causing some drinks to be made improperly.

"Our ability to remain a thriving business during the revival of a once-dead economy is affecting our sales and customer experience, which is something I, as a barista, pride myself in," LaBrecque added.

However, Bianca Ruiz, a Starbucks barista in Los Angeles, told USAToday that the requests aren't as much of a pain as long as the customer is polite and patient.

In fact, she played into the trend and dedicated some of her own TikTok videos to making the concoctions such as the "Strawberry Funnel Cake Frappuccino" and the mini "Coconut Dragon Fruit" drink.

The company is known for being able to customize drinks – although most requests are reasonable, according to Starbucks.

"Customizing beverages at Starbucks and our baristas’ expertise in helping customers find and craft the right beverage has and always will be at the heart of the Starbucks Experience," a Starbucks spokesperson told FOX Business. "There are many ways for customers to modify their favorite beverage and most customizations are reasonable requests from customers."