A teacher has been branded ‘cheeky’ for requesting a pair of £150 designer shoes as a gift from her class.

An anonymous woman, from the UK, has taken to Mumsnet to explain how one of the mothers – who just so happens to be the teacher’s friend – arranged for the parents in her child’s class to each contribute £10 towards the Christmas present.

In total, there was £150 in the kitty and the parent in charge asked the teacher what she’d like them to purchase with the money, to which she asked for a pair of designer shoes.

However, one parent from the school revealed she felt ‘torn’ by the response – and many were quick to take to the comments section to agree, with one branding it ‘strange’ and another ‘weird.’

‘That’s so cheeky! It just feels wrong being done by her mate,’ wrote one, while a second penned: ‘£10 per child is way OTT and just not affordable for lots of people, no way I would be comfortable accepting such an expensive gift. When did this get so out of hand?’ 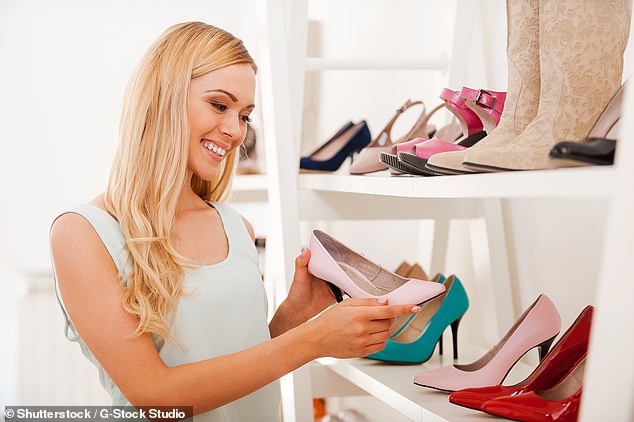 A teacher, from the UK, has been branded ‘cheeky’ for requesting a pair of £150 designer heels as a gift from her class. Pictured, stock image

In the initial post, she penned: ‘At my DC’s school I have a friend whose child is in year one (different classes to my kids).

‘She’s told me that there’s been a bit of controversy and complaints because one parent is very good friends with the teacher and took the lead in organising a class teacher present.

‘She asked the teacher what she wanted if she got a tenner off each parent (so £150). Teacher picked out a pair of designer shoes. And the friend asked all the parents for a tenner.

‘A couple of parents have complained and the designer shoe plan had to be put to a stop.’ 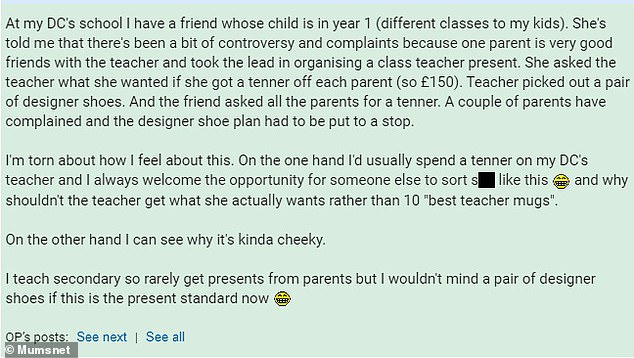 The anonymous mother, from the UK, took to Mumsnet to explain how a couple of parents have complained about the designer shoe plan and that it has been put to a stop (pictured)

The woman went on to say how she feels very ‘torn’ about the situation.

‘On the one hand, I’d usually spend a tenner on my DC’s teacher and I always welcome the opportunity for someone else to sort s**t like this and why shouldn’t the teacher get what she actually wants rather than 10 best teacher mugs,’ she continued.

‘On the other hand I can see why it’s kinda cheeky.’

The confused parent went on to say how she teaches at a secondary school so rarely receives presents at all – adding that she wouldn’t mind a pair of designer shoes if that’s the ‘present standard’ now. 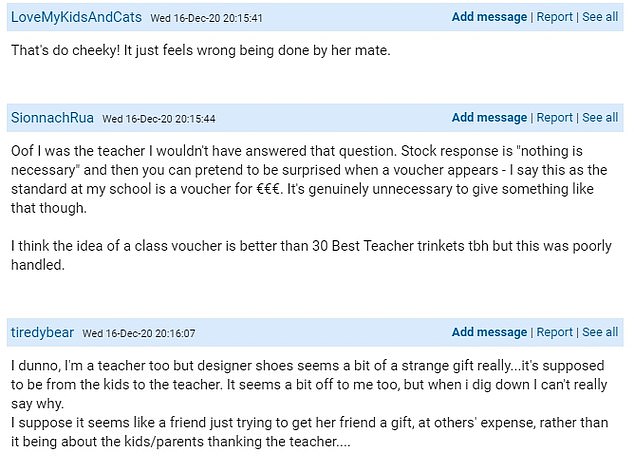 Taking to the comments section, one person penned: ‘That’s so cheeky! It just feels wrong being done by her mate’ (pictured)

And many were quick to take to the comments section to agree the request was ‘strange.’

‘If I was the teacher I wouldn’t have answered that question,’ wrote one. ‘Stock response is “nothing is necessary” and then you can pretend to be surprised when a voucher appears – I say this as the standard at my school is a voucher for €€€. It’s genuinely unnecessary to give something like that though.

I think the idea of a class voucher is better than 30 Best Teacher trinkets tbh but this was poorly handled.’

A second commented: ‘I dunno, I’m a teacher too but designer shoes seems a bit of a strange gift really…it’s supposed to be from the kids to the teacher. It seems a bit off to me too, but when i dig down I can’t really say why.

I suppose it seems like a friend just trying to get her friend a gift, at others’ expense, rather than it being about the kids/parents thanking the teacher….’

Meanwhile, others suggested that giving the teacher a voucher would have been a much more tasteful approach.

‘It would have been more tactful to do a voucher at Selfridges to buy them I think,’ wrote one, while a second penned: ‘Weird. A voucher would be better, her friend could have asked her what shop she would prefer.

‘Also I don’t agree with prescribed amounts. It should be an anonymous donation of as much or little as you want.’

‘With the option to not contribute but still send a nice message. Being grateful to a good teacher should not be about money but about the feeling behind it.’

Another added: ‘I think the asking for a tenner of each parent is the problem. Normally in your class collection there is a suggestion of up to £5. Lots of people are struggling this year.’

END_OF_DOCUMENT_TOKEN_TO_BE_REPLACED

END_OF_DOCUMENT_TOKEN_TO_BE_REPLACED
Recent Posts
We and our partners use cookies on this site to improve our service, perform analytics, personalize advertising, measure advertising performance, and remember website preferences.Ok