Home » Lifestyle » The Australian who designs the palaces of kings, billionaires and… Clive Palmer

The Australian who designs the palaces of kings, billionaires and… Clive Palmer

Rodney Surawski isn’t even sure if one of his favourite creations, the astonishingly ornate painted ceiling of a ballroom in an oligarch’s grand mansion in eastern Ukraine, still exists. But that’s kind of par for the course when your job is designing the homes of billionaires.

Surawski, of Artnow International, translated his fine arts training from the Queensland College of Art into a career creating interiors for palaces and mansions across the world. 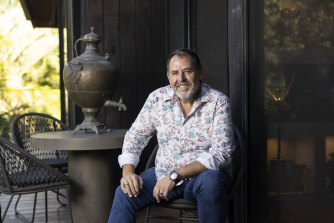 Art director Rodney Surawski at this home in the Gold Coast Hinterland.Credit:Glenn Hunt

One client was steel magnate Rinat Akhmetov, Ukraine’s richest man, who a few years back was ranked by Forbes inside the world’s top 50 richest people – though the war has devastated much of his wealth.

“It was always a bit extreme in Ukraine,” says Surawski. Just entering the Donetsk palace was an adventure – Akhmetov was quite unpopular with the local pro-Russian separatists.

“Beside the fact there was an army based there, his army, there’s also a whole run of kennels around the perimeter with these dogs like grizzly bears. Our mornings would be walking past them with them jumping up against the fence. Then you were searched… you felt safe when you were there. Nothing was going to happen.”

Inside, Surawski’s team made one of his favourite creations: a ballroom and orchestra pit in a baroque Russian style, under a ceiling of hand-painted peacock-themed murals around a huge stained-glass skylight. 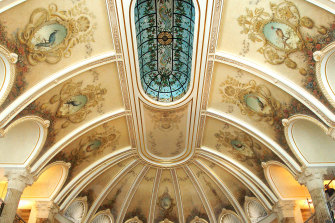 “It’s probably not there any more,” says Surawski, ruefully.

Akhmetov, who is reportedly suing Russia for billions over war damage to his property, also employed Surawski and his team to do up his house in Crimea in 2014 just before the Russians arrived.

“I found myself with my entire team being interrogated by the Russians, asking why the hell there were 30 Australians in Crimea during a takeover,” recalls Surawski.

He’s happy now to talk about what, usually, is a pretty secretive job. 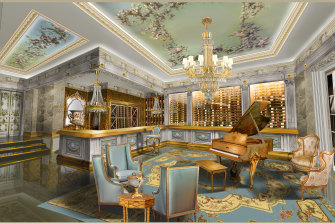 “Most of these jobs, you’d have your hand cut off if you got caught with a camera in there, never mind anything else,” he says. “A lot of your clients don’t need publicity, or want it. You just do the job.

“But I sit back after all these years, and I’ve been working with these decorative artists and nobody knows they’re out there. I see all the publicity for fine artists or their stories all day every day everywhere and I think, ‘Oh my god, [my colleagues’] work is not recognised’. People don’t even know there’s an industry for what we do. 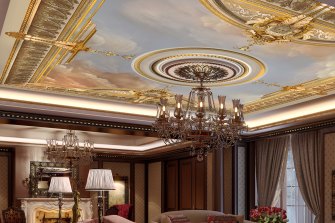 “We’ve gone up against Italian and French teams and done the project, and nobody would know that. Everyone [who sees the finished home] thinks it’s European fine masters, not a little old Australian.”

Much of his work is now focused on the Gold Coast, but his past client list also includes Tunku Kamariah, the eldest daughter of the king of Johor in Malaysia, the king of Bahrain, and… Clive Palmer. 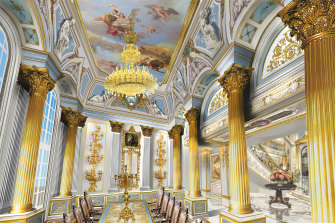 “He definitely knows what he wants,” says Surawski of Palmer. “He comes in, he’s no bullshit, he races through the house, bang-bang-bang, gotta go. He tells me his vision, I show him what he says.”

If he’s asked for a huge rock grotto around the swimming pool, he doesn’t tell the client it’s impossible, he works out a way to make one (his early days working at Warner Bros Movie World theme park helps). 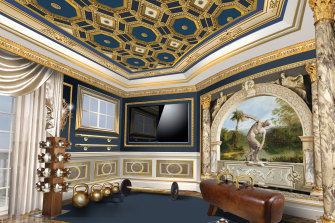 Often, too, the architecture of the building will tell him what is needed to fill it: a contemporary feel, or Moroccan style, or full-on Versailles Baroque where everything is plated in gold and there are bespoke artworks on the ceiling of the gym. At this level, it’s never minimalist, he notes. “They’re not into minimalism.”

“It’s gone from me being a little oil painter to now… the whole house is my canvas.”

But just occasionally, he does wonder what it’s like to live there. One of his current clients, “we had to force them to have a kitchen – they don’t cook”.

Another client who had “the grandest house you’d ever seen” would spend most of the day out the back chatting to people.

“When you’re in the palaces you do sometimes wonder,” he chuckles. “You go to the fridge and it’s a 200-metre walk.”