The eight foods you should NEVER cook on the barbeque

DON’T throw another shrimp on the barbie! The eight foods you should NEVER cook on the barbeque, according to a Michelin-starred chef – including lamb, prawns and tofu

With summer in full swing, some might be tempted to get out the barbeque for nearly every meal.

However, one Michelin-starred chef has warned against using the BBQ every chance you get – suggesting some foods are completely ruined when cooked with the outdoor appliance.

Rohit Ghai is one of the culinary world’s most in-demand chefs following a successful decade on the London restaurant scene – having opened his first solo eatery, Kutir, in 2018. He also runs Mayfair’s Indian restaurant Manthan.

Speaking to FEMAIL, he explained that many seafood are spoiled if placed on the BBQ, because of how easy it is to overcook them.

Meanwhile, lamb is one meat that will become too dry when cooked outdoors and tofu is far too delicate for it.

Here, we look at the ten items you should never cook on the barbeque – and the foods you should use instead… 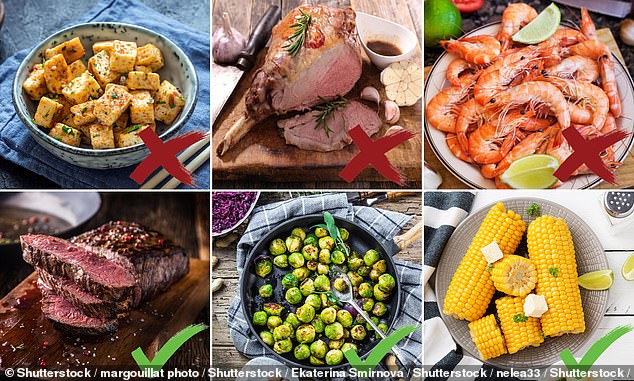 One Michelin-starred chef has warned against using the BBQ every chance you get – suggesting some foods (such as tofu, lamb and shrimps, pictured across the top) are completely ruined when cooked with the outdoor appliance. Instead, try steak, or Brussels sprout and corn on the cob (pictured along the bottom)

Rohit said seafood when using a barbeque should largely be avoided – with the dishes easily overdone when placed on such a high heat.

He explained: ‘Oysters are very delicate in taste and very easy to overcook. Cooking these on the BBQ would be too intense and they’d end up dry.

‘Shrimps, meanwhile, are very susceptible to drying out when introduced to a BBQ. Try grilling langoustines or jumbo prawns instead for your seafood fix.

‘Squid is great for deep-frying but avoid the BBQ unless you like yours extra chewy and cod is too flaky.’

‘Cod is manageable if you keep the skin on so it holds the fish together. I like to serve my cod with a mint chutney and a zingy onion salad.’

Revealed: The foods you should cook on the BBQ

Rohit said: ‘Steak is the perfect accompaniment to a BBQ.

‘A rib-eye cut is one of my favourite cuts, it’s thick and has the perfect amount of marbling and is insanely tasty.

‘It doesn’t need a marinade, just seasoning. Temperature matters more than time when grilling steaks but be sure to let it rest for up to 10 minutes to seal in all of the juices.’

CORN ON THE COB

The Michelin-starred chef explained: ‘Street-style corn on the cob is a must, charred corn tastes the best when grilled over the fire.

‘Add your chosen spice rub and butter, this will cover all the flavour bases – sweet, savoury, smoky, and sour.’

‘You need a hot grill for these and make sure you start by removing any loose or browned leaves from the Brussels Sprouts,’ suggested the expert.

‘These will burn on the grill. To ensure that the Brussels Sprouts aren’t raw or hard in the centre, it is best to quickly precook them before throwing them on the grill.

‘You can do this by blanching them in boiling water for five minutes.’

For vegetarians looking to avoid a barbeque in the sun this summer, avoid opting for tofu, warned the Michelin-starred chef.

This is because the food item is ‘far too delicate’ for the BBQ and will end up a complete mess rather than an edible meal.

Instead, Rohit suggested those enjoying a vegetarian diet should try using paneer when cooking on a barbeque.

The more ‘solid vegetarian option’ can be used as the base for plenty of delicious BBQ dishes, such as charred paneer skewers.

You might be tempted to cook your entire meal on your barbeque when enjoying some of the summer sun.

However, the Michelin-starred chef suggested some side vegetables are best left off the BBQ.

These include leafy vegetables such as kale and spinach.

Rohit said: ‘If you are inclined it needs to be a high heat, a low heat will make them wilt.

‘My favourite vegetables to cook on the BBQ are broccoli and cauliflower – I love a yoghurt base marinade.’

It can be tempting to try out every meat on a barbeque – with the classic such as beef burgers and pork sausages working so well.

Yet not every type of meat is suited to the outdoor appliance, according to the chef.

‘Whilst lamb is one of my favourite types of meat, the shoulder is not one for the BBQ,’ said Rohit.

He added that ‘this cut is naturally quite dry, and is served best when slow cooked.

‘The prep is important, first I sear it, and then I marinade, usually with Indian spices and oil. If you really want to BBQ lamb then chops are your best option.’

It’s also not only the type of meat that matters when using the barbeque this season, insisted the Mayfair chef.

Cooks should also be careful when selecting how they prepare their meat – with minced meat one to avoid.

Rohit explained: ‘Meats like a Shami kebab (a minced meat patty) shouldn’t be cooked on the BBQ due to its delicate nature.

He added: ‘I recommend deep frying or shallow frying the mixture for maximum flavour and taste.’

‘Chicken tikka kebabs or spiced cauliflower kebabs are my favourite options for a BBQ,’ the chef concluded.

Cut the paneer in to equal size square shapes and make a slit in the centre. Take the mango chutney and add chopped fresh mint, stirring it into a mixture, and spread with a butter knife inside the paneer.

In a separate bowl take basil, spinach, coriander, green chilli, garlic, and ginger, wash thoroughly remove all the access water. Blitz in a blender, add soft cheese and lime juice and salt to make a smooth and thick marinade. Apply gradually on the outside of the paneer.

Set aside for 39 minutes. Arrange the marinated paneer pieces on a skewer or put straight on the BBQ grill and cook for 8-10 min, making sure it’s charred properly.

Serve hot with salad and a dash of lime juice on top and chat masala.