The Repair Shop viewers branded the show the ‘saviour of 2020’ last night after its talented experts restored a broken mosaic cross which saved its owner’s life.

Margaret Coyle, from Nottinghamshire, brought in the sentimental piece which had belonged to her Romanian father, explaining it had taken a bullet during the Second World War.

‘When he was 16, Germans invaded Romania in the Second World War. He fled and he made his way to Russia, where he joined the Russian Army,’ she said.

‘He got shot twice, the first bullet entered his mouth and came out his cheek, and then the other one hit [the cross]. It was in his tunic pocket. This saved his life.’ 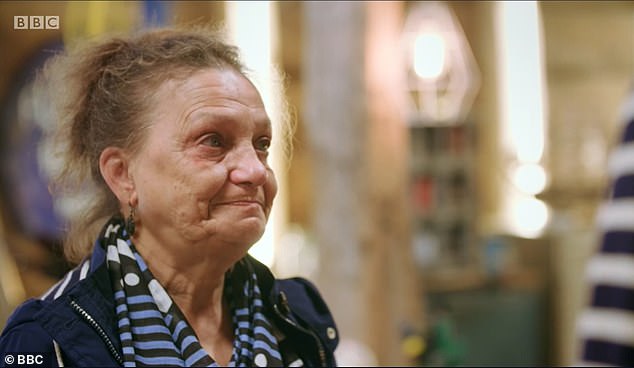 Margaret Coyle, from Nottinghamshire, brought in the sentimental cross which had belonged to her Romanian father, explaining it had taken a bullet during the Second World War 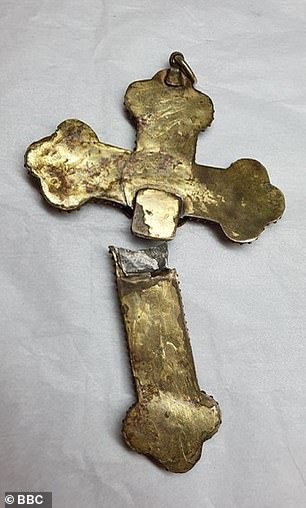 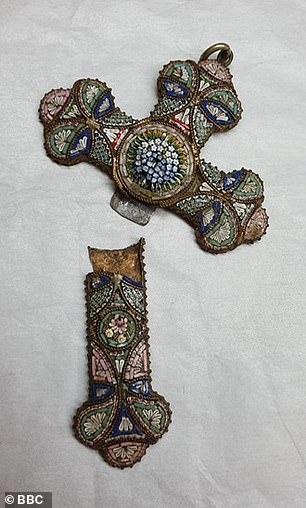 Margaret’s father had been wearing the cross in his tunic pocket during the war when he was shot twice. One bullet passed through his cheek, while another was deflected by the cross

Indicating the damage that the bullet caused, she added: ‘Over the years it’s deteriorated. If it isn’t repaired or restabilised in some way, it’s going to deteriorate further.

‘I would love to see it complete. But if that’s not possible, if you could just make it into a cross again it would be brilliant.

‘It is a massive part of our family history. Without that there wouldn’t be any family.’

Margaret told how her father was displaced after the war and put in a holding centre in Austria, where he met her mother, who was from Yugoslavia.

They then chose to come to the UK and settled in Newthorpe, where her father worked in the mines and the couple started a family. 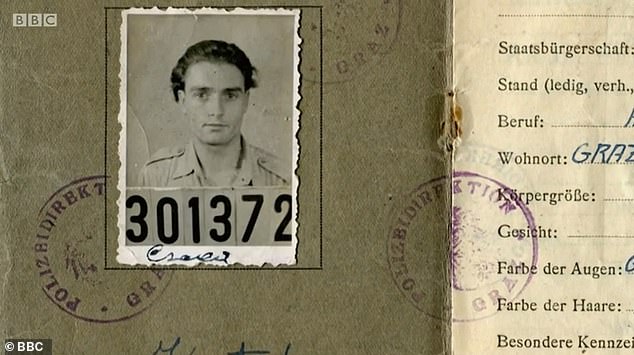 Margaret told how her father (pictured) was displaced after the war and put in a holding centre in Austria, where he met her mother, who was from Yugoslavia 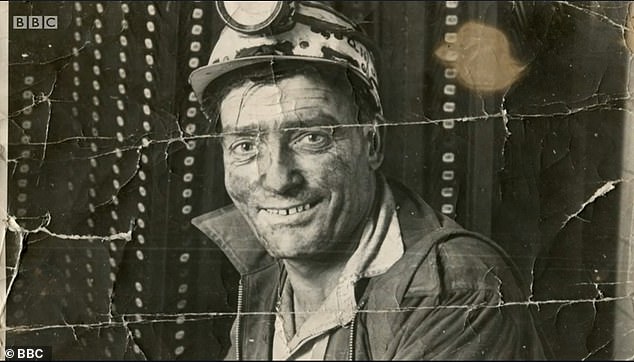 Margaret’s parents chose to come to the UK and settled in Newthorpe, where her father (pictured) worked in the mines and the couple started a family

‘If it hadn’t of been for this cross, Dad wouldn’t have been alive,’ she said. ‘Now they’ve both passed away, it holds a lot of sentimental value.’

She added: ‘The cross is very, very important to me, I need to be able to pass this on to the next generation so that they carry on the story. Anything they can do would be a blessing.’

Amazed by the story, silversmith Brenton West set to work on repairing the metal, reattaching the cross using colleague Steve Fletcher’s vintage soldering iron, which had belonged to his grandfather.

He then passed it onto ceramics expert Kirsten Ramsay, who worked her magic on the tiny, intricate tesserae mosaic. 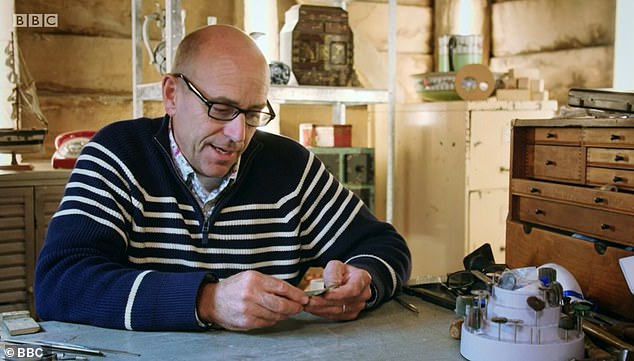 Amazed by the story, silversmith Brenton West set to work on repairing the metal, reattaching the cross using colleague Steve Fletcher’s vintage soldering iron, which had belonged to his grandfather

‘It’s actually quite daunting, I think it’s the smallest thing I’ve ever had to recreate,’ she admitted.

When ‘nervous and excited’ Margaret was shown the restored cross, she was lost for words.

‘I don’t know what to say, I really don’t, it’s brilliant, thank you, thank you both. I daren’t pick it up!’ she said, overwhelmed and teary-eyed. 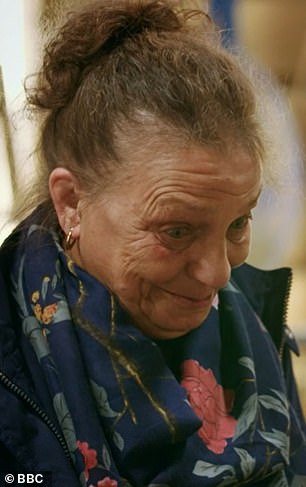 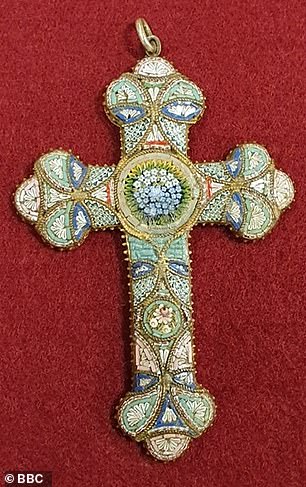 When ‘nervous and excited’ Margaret was shown the restored cross, she was lost for words 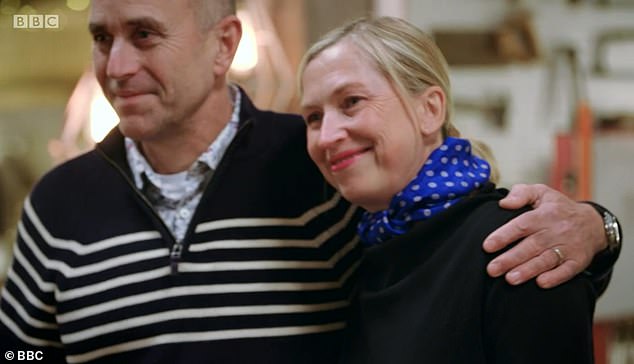 ‘I didn’t think you could do it, I didn’t think it could ever be repaired. I hope [Dad’s] sitting up there with thumbs it. It saved my dad’s life, and now you’ve saved its life.’

Viewers at home were incredibly moved by the story, with one tweeting: ‘Listening to the story of the Romanian cross gave me goosebumps!’

‘Margaret and her cross, such an amazing story,’ wrote another.

‘If only you could bottle #therepairshop Could feel the emotion coming out of the screen for that amazing cross,’ a third added.

Viewers were moved by the story of the sentimental cross, with many admitting it brought them to tears

And one tweeted: ‘The lady had me in tears with her reaction to your and Kirsten’s amazing restoration . Well done to you both. Great job #therepairshop.’

‘Who knew that a programme about fixing old broken things was just the content we all need in 2020,’ commented another.

Though some admitted they would have preferred to have kept the gap in the mosaic where the bullet had hit to ‘preserve the history’.

But for Margaret, who was ‘overwhelmed with emotions’, it meant so much that she was ‘the first person after Dad to have it in one piece’.

The Repair Shop airs Wednesdays on BBC One at 8pm.

END_OF_DOCUMENT_TOKEN_TO_BE_REPLACED

END_OF_DOCUMENT_TOKEN_TO_BE_REPLACED
Recent Posts
We and our partners use cookies on this site to improve our service, perform analytics, personalize advertising, measure advertising performance, and remember website preferences.Ok