The Voice: Bella’s win was ordained, but show revamp wasn’t all high notes

In a result that might have been pre-ordained – and was definitely pre-recorded – devout Christian Bella Taylor Smith was on Sunday night crowned winner of the 10th season of The Voice, pocketing $100,000 and a recording contract with EMI.

Her win brought to an end a revamped season that seemingly hit all the right notes for the show’s new broadcaster, Seven. But was it really that straightforward a hit, or were there actually a few bum notes the network might want to autotune away before next season? 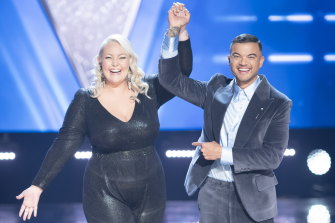 Bella Taylor Smith, coached by Guy Sebastian, is crowned the winner of The Voice Australia 2021.Credit:Seven

With a truncated run of just 13 episodes, down from 21 last year and a peak of 24 in 2013, there was little opportunity for viewers to grow tired of the singing contest over its six-week run. Rejuvenated by a 75 per cent fresh coaching line-up and a raft of innovations designed to pump up the enthusiasm despite the much smaller live studio audience dictated by COVID, the show debuted to its best ratings since 2016, and consistently finished as the top non-news show of the week.

In the early rounds in particular, audiences responded to changes geared to accentuate the positive. Unlimited chair turns meant more singers than ever could bask in the warm glow of being desired, while unlimited picks for the coaches meant everyone could feel like a winner, at least for a little while.

The coaches remained determinedly upbeat throughout. Gone was the bitchiness and sniping that often characterised the exchanges between Boy George and, well, pretty much everyone else in recent seasons.

The sole holdover from Nine’s coaching line-up was Guy Sebastian, who has made a career out of being universally inoffensive. At least he had, until last week’s attempt to be all things to all people on the question of our times – to vax or not to vax – so spectacularly blew up in his face.

Jessica Mauboy – who, like Sebastian, is a graduate of the television singing contest (she was runner-up on season four of Australian Idol) – is almost universally liked, while Keith Urban is a bona fide star of the Nashville country-pop world (and married to Australian royalty to boot), with not a bad word to say about anyone. English pop star Rita Ora brought a touch of the unknown, a splash of glamour, and spoke just loudly enough to our lingering cultural cringe. 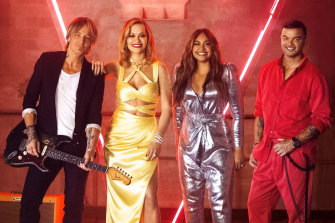 Perhaps fearing that might all be a bit too saccharine, the producers this year introduced “the block”, a move in which one judge-coach-mentor could prevent another from claiming a singer they both wanted. It added a welcome note of low-key bastardry, even if Sebastian seemed mortified at having actually used it against Mauboy.

But Seven’s decision to commission a shorter show – dictated by budget, and perhaps a desire not to overstay the welcome of a format that Nine had dismissed as tired (admittedly, only after it had been outbid by its rival) – came at a cost, with coaches moving at warp speed from picking teams to culling them. That innovation was less popular with viewers, with some complaining it reduced their emotional investment in the competition enormously.

By the time we got to the final, which was recorded in Sydney’s Carriageworks in April, with four endings filmed (one for each potential winner), we had a fair representation of what this show is about. Mick Harrington was the ordinary bloke who’d never had a singing lesson but was blessed with a voice of warmth and emotional richness, though not a lot by way of stage presence. Arlo Sim was the teenage prodigy. Bella Taylor Smith was yet another product of the evangelical church movement (she’s a member of Hillsong) that has produced so many talent-show contestants (including Sebastian) over the past two decades.

As for the six-part G-Nation, they seemed to be there only because Ora had mistakenly imagined she was on The X Factor and the world needed another girl group (she even tried perking her team up with a recorded message of support from Spice Girl Emma Bunton). 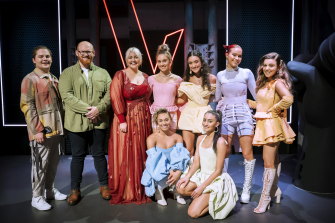 The promos had promised the grand final would be “the most spectacular television event in decades”. In truth, it looked much like previous finales. “You’ll remember this for years,” Matt Wills, the deep-voiced king of Seven’s always-understated promos, insisted. Really? Who won in 2017 then? Who was runner-up in 2019?

The truth of such claims is less important to the networks making them than is their efficacy in making us watch. Ratings figures will likely show a big improvement on last year, when just 938,000 metro viewers tuned in to watch Guy Sebastian’s brother Chris crowned the winner (in defiance, some claimed, of the show’s own conditions, which prohibit anyone associated with the program from entering; Nine later claimed that the fact he had previously been a contestant meant he qualified as an “all-star” and was thus exempt from such conditions).

So, did The Voice succeed this year on those terms? Well yes, but not without qualification.

That strong debut no doubt owed plenty to the halo effect of the Olympic Games. The continued strong showing in the first couple of weeks after the Games indicates that viewers liked the tweaks, and the new coaching line-up, and were enticed by what the show does best – sprinkling little human backstories with moments of truly impressive, if frequently overwrought, vocal performance.

But a closer look at the figures for Sunday nights – the strongest night of each week, and the only night the show screened in all six weeks – paints a slightly more complex picture.

In short, The Voice opened very strongly but shed viewers every Sunday thereafter.

The launch episode on August 8 drew 1.41 million viewers in the five mainland capitals. A week later 1.357 million tuned in, in week three it was watched by 1.291 million and in week four 1.279 million tuned in. On September 5, just 1.088 million watched the semi-final, in which the final eight were culled to the final four.

Taking the broader approach the networks now favour – which encompasses metro audiences, regional audiences, time-shifted audiences (those who record and watch within the first seven days after broadcast) and those who watch via 7Plus, the network’s Broadcast Video on Demand (BVOD) player – the numbers are higher but the pattern is the same.

The official VOZ figures for the week five semi-final on September 5 haven’t been released yet, but preliminary figures show the Sunday episode had an overnight metro and regional audience of 1.616 million, with OzTam’s seven-day rolling report showing it had picked up another 176,000 viewers on BVOD as of Saturday.

That’s a total of 1.792 million a week out from the grand final. Or to put it more bluntly, The Voice shed almost one-quarter of its Sunday-night audience between launch and week five.

When it’s all done and dusted, The Voice will still rank as one of the most successful shows of 2021. But it did hit the odd bum note, and viewers did drift away despite – or perhaps because of – the short run.

The Voice will undoubtedly be back. But don’t be surprised if it undergoes a bit of a remix ahead of season 11.