Two timber industry advocates who criticised high-profile Australian scientist David Lindenmayer on social media have been forced to retract their comments and apologise.

Professor Lindenmayer, an ecologist at the Australian National University who specialises in forest conservation, sued Justin Law and Matthew Leplaa for defamation in the Victorian County Court after they made personal attacks on him on social media. 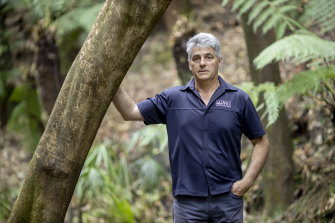 As reported in The Age and The Sydney Morning Herald, in March 2020 the Goongerah Environment Centre in Gippsland wrote to Monique Dawson, the chief executive of logging agency VicForests, about logging in fire-affected forests, citing two research papers by Professor Lindenmayer.

When Ms Dawson replied, she included a statement: “We do not accept the published opinions of Professor David Lindenmayer as reflective of evidence and do not consider him to be an authority in these matters.” 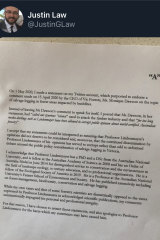 After her comments were made public, more than 100 scientists wrote to the Andrews government to back Professor Lindenmayer.

Mr Law, a spokesman for Fire and Wood Communities Australia, an alliance of timber industry supporters, used his now-deleted Twitter account to republish the VicForests statement on May 1 last year.

Mr Law added his own comments, applauding Ms Dawson for calling out the “spurious ‘science’ used to attack the timber industry”.

He went on: “For too long media darlings such as Lindenmayer have been allowed to corrupt public opinion about world-certified Australian forestry.”

On the same day he also tweeted: “Why do people ignore world-certified timber practices in favour of agenda-driven ‘science’ provided by ANU cash cows?”

Professor’s Lindenmayer’s statement of claim, filed to the court in August last year, said Mr Law’s post was defamatory for a range of reasons, including that it implied his work was spurious, fake and false and intended to corrupt public opinion about the Australian forestry industry.

The statement of claim says Professor Lindenmayer is a professor of ecology and conservation biology at the Fenner School of Environment and Society at the Australian National University.

It lists some of his achievements, including being elected a fellow of the Australian Academy of Science, many awards for his work as an ecologist, being made an officer of the Order of Australia for his “distinguished service to conservation”, and publishing 795 peer-reviewed scientific papers.

The statement of claim also alleges that on May 4, 2020, Professor Lindenmayer was presenting a talk to the Yarra Valley Writers Festival by video, which was streamed via the festival’s Facebook page.

In the video’s comment section, Mr Leplaa, who works in the timber industry, wrote: “Tune into this chat and give this liar heaps … pushing his one-sided Greens agenda funded and paid for by the radicals. Pushing lies and propaganda by fraud like David linderliar … his [sic] a disgrace to anyone who has a brain.”

The matter went through mediation and was settled before it went to court, with compensation paid for an unknown amount.

Mr Law and Mr Leplaa were required to publish apologies. Mr Law wrote that he accepted his statements could be interpreted as meaning Professor Lindenmayer’s opinion did not deserve to be considered.

“While my own views and that of some forestry scientists are diametrically opposed to the views expressed by Professor Lindenmayer in acknowledged scientific publications, my comments impugned his personal and professional integrity,” he wrote.

In his apology, Mr Leplaa acknowledged he had made statements about Professor Lindenmayer that were personally offensive to him and stepped beyond what was legitimate debate on a matter of important public policy in terms of forestry management.