Home » Tomorrow? The future being sold at our weekend auctions

Tomorrow? The future being sold at our weekend auctions

It’s a sign of how unhinged the national property market has become that a friend who bought a house last Friday was told his new home had risen $20,000 in value by Tuesday.

He hasn’t even got the keys to the place but so separated from reality has the national parlour game that is bricks and mortar become that it is showing increasing similarities to a Ponzi scheme. 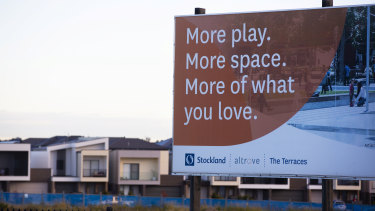 Our love affair with housing has driven prices to record highs … at a potentially huge cost to the nation’s economic future.Credit:Jessica Hromas

According to CoreLogic, Sydney’s median house value has jumped by more than 15 per cent since the start of the year. It is now just shy of $1.2 million, and given the way prices are going up, it will have gone beyond that mark by the time you finish reading this article.

It’s not all that different in Melbourne, where the median value is now at $908,000 after adding 9.4 per cent since January 1.

But it is not just our two largest property markets where the irrational exuberance is at play.

It is being driven by a quadrella of inter-related economic issues: record low interest rates, a glut of household savings (due in part to a ban on Australians leaving for an overseas holiday), government support measures that have fed directly into prices and strong consumer confidence.

Aiding and abetting the price surge is a tax system that encourages people to speculate in an asset class (property) that might provide a roof over our heads but does very little to boost national productivity.

This is all happening in a country where population growth has fallen to its slowest rate since World War I.

It’s not being driven by rampant wages growth, which has slumped to a record low. All of those houses changing hands on auction days are being financed by debt that will, eventually, have to be repaid.

Even as the figures were being released, Treasury secretary Steven Kennedy was telling a Senate inquiry that the lift in house prices was likely to “support above-average growth in consumption”.

Household spending accounts for about 60 per cent of national economic activity.

All the focus at present is on the economy in the short term. Long-term worries – such as the generation of prospective homeowners saddled with mortgages that would make a Grand National champion baulk – are being pushed to the side.

How else to explain federal and state government policies that are actively lifting prices?

Somewhere, this magical roundabout has to stop.

The pain of that abrupt halt could dwarf the economic home price party currently being celebrated.