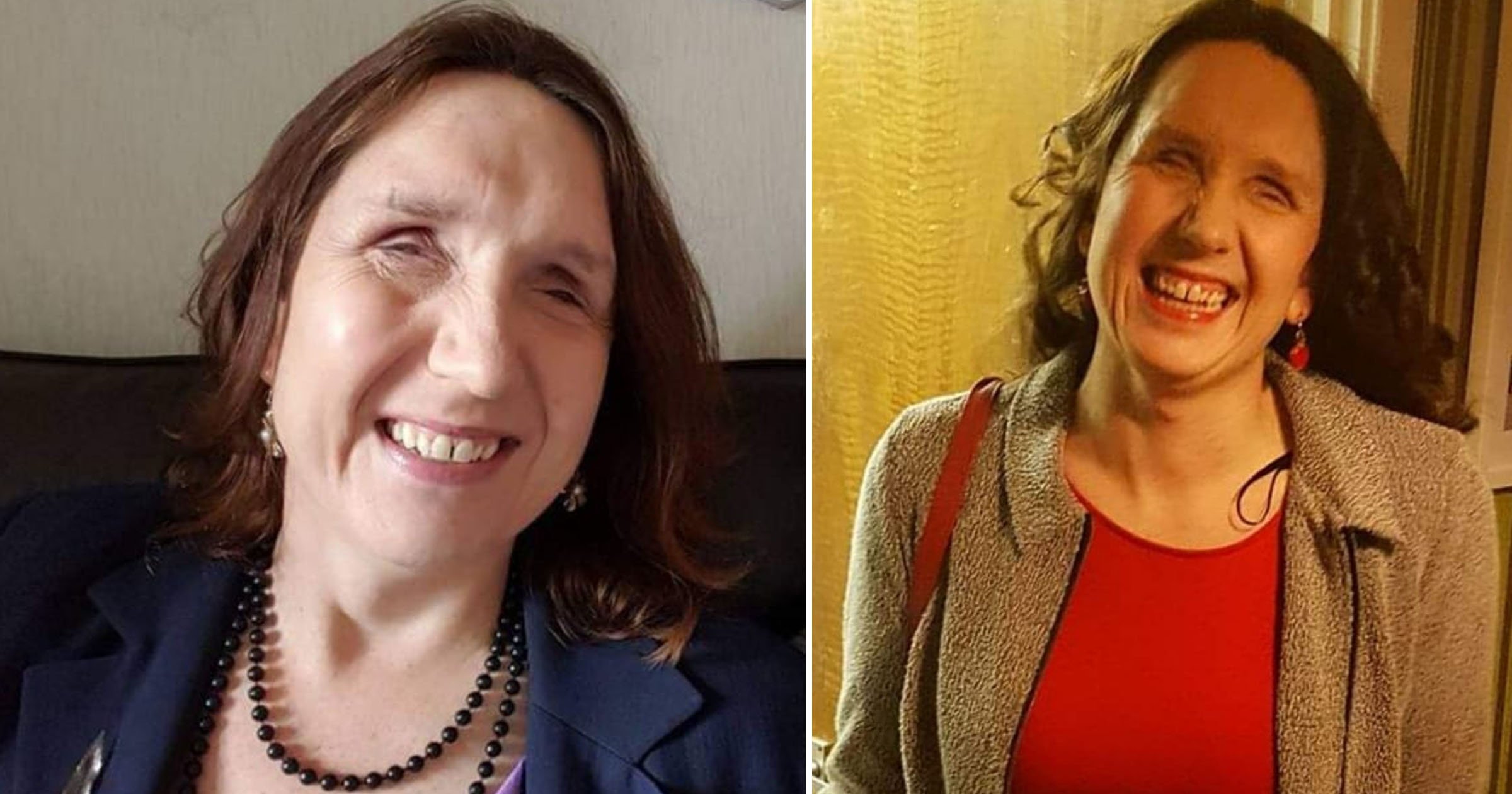 The disability campaigner suffered cataracts as a child and grew up visually impaired, until a freak accident caused her to lose her sight entirely in 2012. She started her transition one year later, while still adjusting to her new blind status.

She told Metro.co.uk the combined impact of being disabled and trans can sometimes be ‘exhausting’, and causes her to move through the world in a state of hypervigilance.

Sarah explained: ‘On a practical day-to-day level, my blindness is my biggest barrier. But on top of that, as a disabled trans woman, there is a constant barrage of negativity.

‘I’ve been told I pass quite well, but I’ve been conscious about my voice, as obviously within the blindness community, it’s a big part of how you identify somebody.

‘Sometimes it’s hard when I can tell people are looking at me because you can hear the conversations pause as you walk past.

‘But then, as my wife says, it could be because I’ve got a long white cane and they’ve never seen a blind person before.

‘It’s hypervigilance. You are always expecting the worst, as much as you try not to. It’s that sense of – is someone going to say something? Am I going to be treated differently? That does take its toll.

‘I think in the current climate of issues around trans identity and disability, neither gets a particularly positive reaction.’

Sarah was diagnosed with a form of arthritis at the age of two. The condition caused her to have cataracts at seven, and she had more than 50 eye operations, four leg operations and over 200 hospital visits during her childhood.

She grew up visually impaired and later lost complete vision in her right eye, which led to her relying on speech technology to read. Her life then changed forever in 2012, when she punctured her left eye on the corner of a cupboard door while getting ready for work one morning. It left her completely blind.

One year later she also ruptured her right eye in a second freak accident, after bending down to her guide dog and colliding with a railing.

Losing her entire sight, coupled with her father’s death the previous year, became Sarah’s ‘tidal wave moment’, which forced her to confront her trans identity.

She says her disability dominated her youth and didn’t leave her room to explore how she felt.

Sarah said: ‘I always knew I felt different, but I think I also put a lot of it down to my disability. I had very disrupted schooling due to hospital trips and I was always battling to keep up-to-date with school work.

‘I was also adopted as a baby, and all of those things together really fed that sense of insecurity about who I was and where I fitted in in the world.

‘When I realised I had to transition, I knew it would mean having to navigate it all on my own. I was married with three children and life was okay in many ways. But I also knew I had to do it. It was literally a case of transition or die.’

Sarah had a positive experience with the Gender Identity Clinic (GIC), but they had never had a blind person come through the system before.

The experience opened up a discussion about how her sense of identity as a woman would form.

She said: ‘I’ve had to work through that whole sense of who do I see myself as. I know my body shape has changed through hormones and it’s now very feminine. I can’t really remember how I look like in terms of my face.

‘I’ve also been measured for prosthetics for my eyes, but I’m in two minds about wearing them at times. On the one hand, they make me look so-called “normal”, but people get confused as to why I have a white cane.

‘Then there’s part of me that thinks, why should I conform to traditional standards of how I should look? I’m not ashamed of it. It’s exhausting having to constantly think about how people are going to see me.

‘Women are held to a higher standard of normality, there’s much more rigid standards of what we should look like – but yet we know women come in all different shapes and sizes. Why should it matter if I’m a woman with two eyes that are squished?’

Sarah now works as a staff disability advisor at the University of Oxford and produces The Simply Equality podcast. She wants to raise awareness of the lived experience of disabled LGBTQ+ people, whose stories aren’t often heard.

Sarah said: ‘I’m lucky. Unemployment rates within the blind community are just crazy, around 75% are unemployed. I recognise my privilege and I want to use that to try and show that disabled people, trans people, we’re just people.

‘There is a lot of fear and prejudice. I’m trying to be me, to be as open and honest as I can, so people can see – I’m not a theory, or a concept, or a philosophical argument, I’m a person.’