Why this year I’m giving the best gift I can…hope: One year on from our Hospital Helpforce campaign, TV producer HELEN ADDIS shares her emotional story of spending last Christmas battling breast cancer — and how it inspired her to help others

Turkey I can taste. Sherry I can savour, and mince pies that don’t make me queasy. Roll on Christmas. I can’t wait.

And right up there, twinkling on top of the tree, are all the simple pleasures I once took for granted.

Snuggling up on the sofa in front of some old festive film with my kids. Dancing around the tree in our PJs. Giggling at cracker jokes.

I’ve always adored Christmas. But this year, I am looking forward to every single corny aspect like never before. I’m even more excited than my children (Belle, seven, April, eight, and Archie, ten).

You see, last year breast cancer stole my Christmas. I was in the throes of chemotherapy with months of treatment ahead. 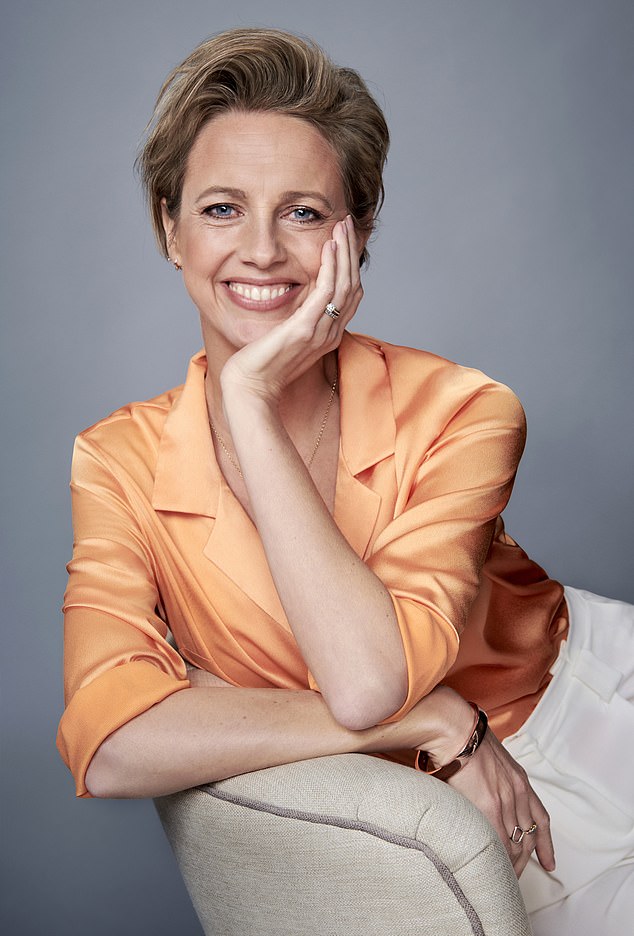 I was too nauseous to swallow a single bite of turkey and so weak that just sitting propped up like a waxwork on the sofa was a major achievement. You wouldn’t wish it on your worst enemy.

But miraculously, 12 months on, I can see nuggets of joy, like the chance to spend quality time with my children.

Most of all, I can see what’s really important at this time of year. And, believe me, it’s not having the cleanest house or buying the most expensive presents. It’s silly board games and bedtime stories.

That’s why this is going to be the best Christmas ever. It’s also going to be very different. For starters, I’m spending part of the festive period in the chemo ward at Ashford Hospital, Surrey. But this time, I’m not there for treatment.

I’ve volunteered with the support of the wonderful charity Future Dreams, which raises funds for those touched by breast cancer, and I’ll be talking to patients. I want them to know they are not alone and there is hope.

Sharing this message is just one of many vital roles volunteers can perform in hospitals across the country.

That’s why campaigns such as the Daily Mail’s Hospital Helpforce are so important. You don’t really get the joy of Girl Power until you sit in a ward with eight women all being treated for breast cancer. 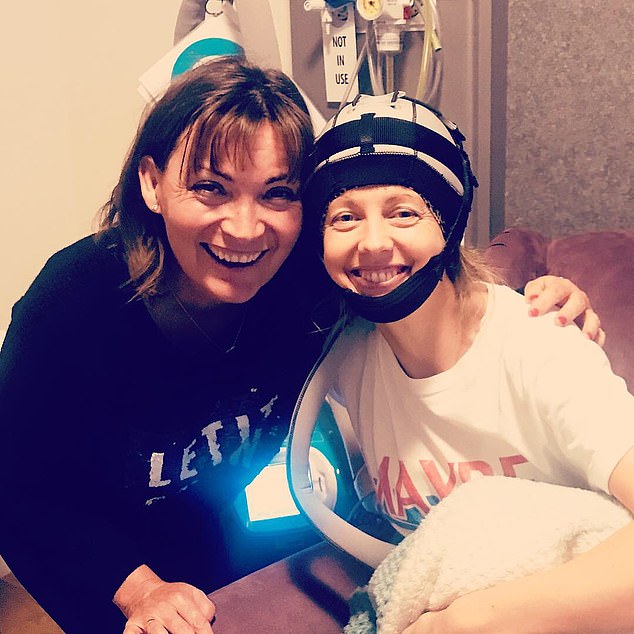 This year, she visited No 10 to talk about the Change And Check campaign she’s started with the backing of ITV’s Lorraine

That’s what I did yesterday morning. The indomitable spirit of those women was mind-blowing. There were hugs and so much laughter as we swapped stories about everything from false boobs to dodgy wigs.

The devastating isolation cancer brings is magnified a hundredfold at Christmas. And, if you’re a mum, the misery is compounded by letting your kids down.

Last year, I desperately needed someone to tell me that it would get better. Yesterday, I hope I was able to do just that.

In the past year, I’ve gone back to work with a ‘Boob Bus’ touring the UK, climbed the Himalayas and visited No 10 to talk about the Change And Check campaign I’ve started with the backing of ITV’s Lorraine, the show I produce.

My aim is to put breast-check reminders in every shop and gym changing room. Already, 15 women have spotted lumps and had early treatment thanks to our reminders. 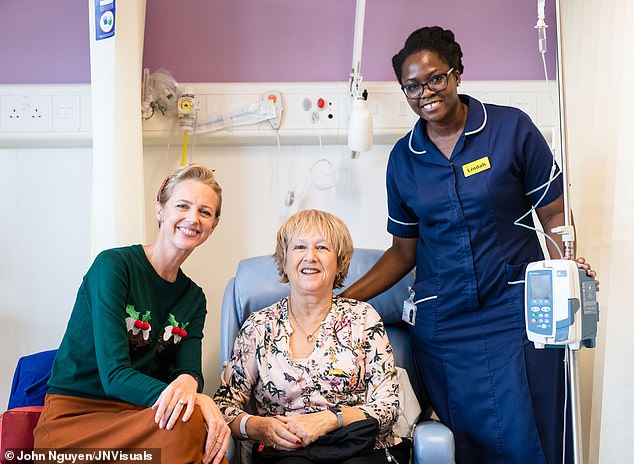 I didn’t have an inkling of what was in store when I found a lump in my right breast in April last year. My GP referred me for a mammogram. I also had a biopsy and an ultrasound.

It transpired I had a very aggressive grade three cancer, which had spread into my lymph glands. The consultant was positive, but didn’t pull any punches: ‘This cancer is on a mission and we need to act quickly.’

I would have a full mastectomy on May 4, followed by 16 rounds of chemotherapy, 15 of radiotherapy and finally immunotherapy. In total, I was facing 18 months of treatment (which finally finished last month).

Plans for my 40th went out the window. I felt so guilty: I was letting my family down. Had we caught it early enough? Was I going to leave my poor children without a mother?

The first challenge was telling them. We explained I was ill and that the treatment would make me very sick in the short term.

After my diagnosis, my husband Mark took up DIY, and April got upset. When I asked why, she said: ‘Daddy has a book called The Big Book of DIE!’ She thought he was preparing for my death.

We developed a black humour. I laughed like a drain when I discovered Belle had taken my prosthesis — the silicone shape I wore in my bra — into school for show-and-tell. 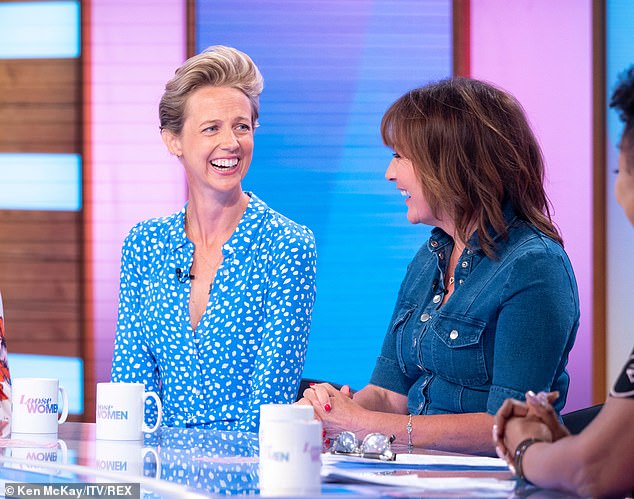 Chemo drugs killed virtually every hair on my body. My tastebuds were shot to bits. The drugs gave everything a revolting metallic tang. Ulcers made it so painful to swallow I ended up sipping nutrients through a straw.

Then, in October, my mum died after a long struggle with dementia.

By last Christmas, I was on my knees. I’d lost all sense of perspective. All those ‘must-have’ presents on my kids’ lists were like catnip to me.

I remember lying in bed, weeping, because I couldn’t get them each a new tablet in a different colour. I had set my heart on it, like it was the most important thing in the world.

One day, I was looking so pale Archie said he was frightened of going to school in case I wasn’t there when he got home. I vowed I would drag myself out of bed to wave the children off — even if I went straight back afterwards.

By Christmas Eve, my body had had enough. I was shaky with exhaustion, and Mark wanted to go to our usual carol concert alone. But I couldn’t let my kids down.

It was a big mistake. By 10pm, I had a raging temperature and my white blood cell count was so low I was in danger of neutropenic sepsis, a side-effect of chemo that can be fatal.

Mark called 999. Lying in the isolation ward, I had never felt more lonely. That’s when I realised nothing mattered apart from being with my children on Christmas morning.

Pumped full of antibiotics, I discharged myself, arriving home in a taxi at 6am. The kids never guessed where Mummy had spent Christmas Eve. I was readmitted on Boxing Day.

I look back now and pinch myself. Did that really happen? Yet I know I’ve changed — thanks to cancer.

This year, the children will have lovely, affordable presents courtesy of eBay, while adults are being gifted charity donations, and our meal is coming ready-made from Cook.

One of the most important parts of Christmas will be time spent with women in the same, terrible place I was last year.

And when I raise a glass of wine (which won’t taste like metal filings), I’ll be toasting everyone spending Christmas in hospital — and the volunteers who prove to them that life can get better.

Helen is an ambassador for Future Dreams (futuredreams.org.uk) and is raising funds for ITV Lorraine’s Change And Check.

END_OF_DOCUMENT_TOKEN_TO_BE_REPLACED

END_OF_DOCUMENT_TOKEN_TO_BE_REPLACED
Recent Posts
We and our partners use cookies on this site to improve our service, perform analytics, personalize advertising, measure advertising performance, and remember website preferences.Ok