Unchecked climate change would cost Australia $3.4 trillion and almost 900,000 jobs by 2070, dwarfing the impact of the coronavirus recession, predicts ground-breaking research that warns key industries, including mining and tourism, would be devastated without immediate policy change.

The research by Deloitte Access Economics suggests the country could adopt a net-zero emissions policy at a fraction of the cost of dealing with the pandemic that would help grow the economy over the next half century and add a quarter-of-a-million jobs. 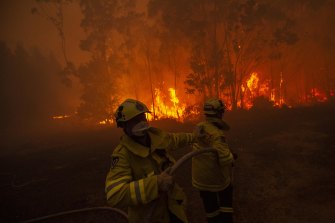 The report, based on the assumption of a three-degree increase in global average temperatures by 2070, examines the economic fallout if nothing is done to address climate change. It differs from most other economic models because it takes into account the impact of higher global temperatures whereas almost all others assume there is no cost from a hotter, drier and more variable climate.

According to Deloitte Access, unchecked climate change would reduce Australian economic growth by 3.6 per cent a year and cost 310,000 jobs annually by 2050. By 2070, the economic cost will have almost doubled to 6 per cent, or $3.4 trillion in present value terms, and 880,000 jobs.

The impact is around the same as the economic cost of the coronavirus pandemic until 2055 and then grows.

The report's principal author, Dr Pardeep Philip, said the costs to Australia of climate change would continue rising every year, with farmers, builders, manufacturers, miners and tourism-related businesses at the economic "front line".

He said the economic losses due to climate change would dwarf the impact of the coronavirus recession, arguing a move to net-zero emissions was an "economic necessity" for Australia.

"By 2050, Australia will experience economic losses on par with COVID every single year if we don't address climate change. That would compromise the economic future of all future generations of Australians," Dr Philip said.

"Whatever Australia does or doesn't do, the global warming which has already taken place will hurt our lives and livelihoods. This cost is locked in – it is the cost of delay."

Last week, Prime Minister Scott Morrison declared Australia would make its own “sovereign decisions” on emissions targets, adding he was not concerned about future exports despite four of Australia's major trading partners, including China and Japan, adopting net-zero emissions targets.

The government has argued it would comply with the terms of the Paris Agreement by reaching net-zero emissions some time in the second half of the century, but has not set a firm target.

A spokesman for Energy Minister Angus Taylor said the government was focused on five priority technologies that would "substantially reduce emissions and make net zero achievable."

"The Morrison government will continue to deliver practical measures that guarantee reliable and affordable energy, stimulate jobs and reduce emissions, without imposing new costs on households, businesses or the economy."

Deloitte Access found Queensland, the Northern Territory and Western Australia would be the biggest losers from unchecked climate change.

It forecasts Queensland's economy to be 14 per cent smaller with 470,000 fewer jobs due to the impact of climate change, saying that "economic loss is the norm" for the state.

NSW's economy would be 4 per cent smaller if climate change continued, with 175,000 fewer jobs, mostly in the tourism and manufacturing sectors as heat stress and variable weather patterns disrupted the state.

Victoria would be one of the least affected areas because of its more southerly location, but even its economy would be 1 per cent smaller with 55,000 fewer jobs.

The worst-hit sector of the economy would be services, with Deloitte Access estimating it would suffer a $1.6 trillion loss in activity. Other areas to be severely dislocated include tourism ($500 billion), mining ($350 billion) and manufacturing ($330 billion).

Australia was already paying a price for "locked-in" global warming, with the report estimating it was costing the country 0.1 per cent of GDP a year. By 2050, the combined cost of that would be $90 billion in present value terms.

Deloitte Access estimates the country could transform the economy, bringing emissions down to net zero, for $67 billion or the equivalent of the government's JobKeeper wage subsidy program this financial year.

The executive director of international emissions research initiative the Global Carbon Project, Pep Canadell, said the world was on track to warm by three degrees.

Dr Canadell, a CSIRO research scientist, said the "path to three degrees of warming is based on the current trends and the 2030 commitments", which countries have ratified under the Paris Agreement.

Australia has committed, under the agreement, to reduce emissions by between 26 and 28 per cent by 2030, based on 2005 levels.

Top scientists have argued that for Australia to honour the Paris Agreement – which requires countries to follow the best available scientific advice on how to limit global warming to less than two degrees – the country must reach net-zero emissions before 2050.

"The Californian and Australian fire season are quite clearly linked to the very strong increase in fire weather and are closely linked to climate change," he said. "The impacts are already bigger than what we first thought."

Get our Coronavirus Update newsletter for the day’s crucial developments at a glance, the numbers you need to know and what our readers are saying. Sign up to The Sydney Morning Herald’s newsletter here and The Age’s here.

END_OF_DOCUMENT_TOKEN_TO_BE_REPLACED

END_OF_DOCUMENT_TOKEN_TO_BE_REPLACED
Recent Posts
We and our partners use cookies on this site to improve our service, perform analytics, personalize advertising, measure advertising performance, and remember website preferences.Ok