People who lose their jobs would get up to 70 per cent of their former income for a short period under an insurance scheme being examined by the Morrison government as part of a possible overhaul of the JobSeeker system.

In a plan that would bring Australia into line with almost every other rich nation in the world, those unable to find work within six months would revert to the current $40-a-day JobSeeker payment. 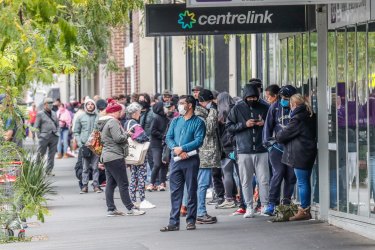 The government is set to overhaul the JobSeeker scheme when the current COVID supplement, worth $150-a-fortnight, ends on March 31.Credit:Jason South

Proponents of the unemployment insurance scheme argue it would be a massive financial incentive for people to gain fresh employment.

The government is set to overhaul the JobSeeker scheme when the current COVID supplement, worth $150-a-fortnight, ends on March 31.

Ministers have signalled JobSeeker will not revert to its pre-pandemic level of $565-a-fortnight amid pressure from unions, economists, social services and business groups and even the Reserve Bank.

But there is debate on the new rate and if it will form part of a broader overhaul of all welfare payments. There are expected to be more than 1.5 million people affected by the end of the COVID supplement.

Research by the Blueprint Institute, headed by former Treasury economist Steven Hamilton, shows insurance schemes that reduce benefits over time get people back into work faster and with higher wages than flat-rate systems.

Of 40 OECD nations tracked by Blueprint, Australia has the lowest unemployment benefit as a proportion of average wage in the developed world for people out of work for two months.

But Australia is around average in terms of long-term support as other nations cut their assistance for those unemployed for at least six months.

Under the Blueprint proposal, which is circulating in government circles, people would get a government payment of up to 70 per cent of their former wage for six months. The taxable entitlement would be capped at $35,000 and a person could claim only a cumulative six months worth of the payment every two years. 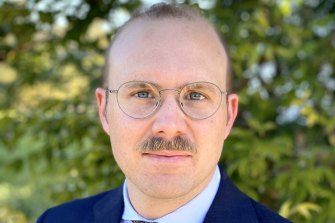 “The reductive focus of the public discussion solely on the headline rate, JobSeeker, ignores the fact that there is a far better way to reform welfare that can benefit everyone – recipients, employers, taxpayers and the economy more broadly.”

Blueprint found the government was “hamstrung” in the current debate to increase the base rate of JobSeeker to all recipients because it would do nothing to encourage long-term unemployed into the jobs market and provide only moderate relief to those temporarily out of work.

The institute estimates the insurance scheme would cost $9 billion a year, which it argues could be funded by a 1 per cent levy on workers or by abandoning the next increases in the superannuation guarantee levy.

The research came as weekly payroll data from the Australian Bureau of Statistics showed a lift in people on business payrolls in the fortnight to the end of January.

Payrolls are now almost back to where they were pre-virus although they are still down 1.9 per cent on mid-March, when the ABS started collating the data.

“It does suggest the virus outbreak from mid-December that impacted NSW, Victoria and Queensland did not hamper the ongoing recovery. We would also expect this to be the case with the current five-day lockdown in Victoria,” he said.