Although many people can relate to having a hair emergency, not everyone is willing to handle it at a bar.

That was the solution one woman had when she stopped by Duffy’s Sports Grill in Miami this weekend, according to a viral Instagram video shared by Only in Dade, a lifestyle media company that’s dedicated to chronicling “The Good – The Bad – The Funny” in Dade County.

In the video, the woman in question is using a heat-styling brush to smooth out her hair while she stands off to the side of the busy sports grill.

Operators of the Only in Dade Instagram account did not immediately respond to Fox News’ request for comment, but the clip has racked up more than 471,140 views and 19,580 likes since its original upload on Sunday morning.

While the post didn’t provide much context, commenters joked that the woman’s public hairstyling display isn’t all that unusual with Miami’s humid weather. On the opposite end, critics argued that the woman should have chosen a bathroom to re-style her hair for privacy and sanitation reasons. 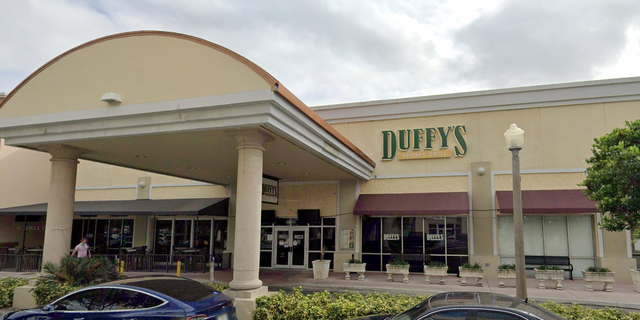 The Duffy’s Sports Grill location in Miami is located in the Kendall Village Center at 8575 SW 124th Avenue. A woman was recently spotted styling her hair in the sports grill, according to a viral video shared by Only in Dade. (Google Maps)

Others saw the humor in the woman’s multitasking skills, including DJ Jony Privat, who wrote: “I bet a croqueta she does her laundry at the beach.”

Over the weekend, the humidity level in Miami was well above 50%, according to weather forecasts.

Humidity can make heat-straightened hair frizz or curl up whenever hydrogen bonds are formed “between water molecules and the proteins” in hair, according to Smithsonian Magazine.

Editor’s Note: A previous version of this story listed the incorrect location of where the viral moment took place and has since been updated.