In death, Edmund Capon has been canonised as a Barnum & Bailey showman and salesman who in the 33 years he led the Art Gallery of NSW enlivened the art world, brought art to the masses and put the cultural institution he adored on the map.

His mischief, wicked sense of the ridiculous and wit were remembered fondly at a public memorial hosted by the gallery last night on what would have been Capon's 79th birthday. 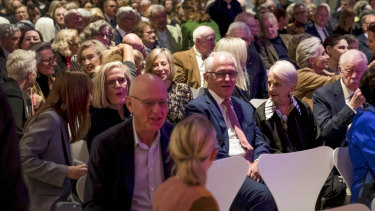 Former prime ministers and premiers were among those who gathered for Edmund George Capon’s memorial on Tuesday night.Credit:Brook Mitchell

But it was the figure of the private man, scholar and friend, that moved the packed crowd who had gathered, standing room only, in the gallery's entrance court joining four former NSW premiers, one former prime minister, three former ministers of arts, Australian art and cultural leaders, members of the media, gallery trustees and staff, past and present.

Capon's partner of 43 years Joanna spoke of the reputation of the man she was yet to meet at the Victoria & Albert Museum, who defied the rules, laughed at convention, kept drink in a drawer and took Saturday afternoons off to watch Chelsea play.

He had been fortunate, she said, have lived his life to the full and credited the Art Gallery of NSW, Sydney and Australia that allowed him to "grow his wings and soar". 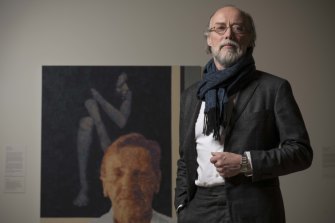 Steven Miller, head of the gallery's library and archives, joined the gallery ten years after Capon's 1978 appointment as director. He was at a turning point in his life having spent the previous six years in a Catholic monastery.

"One of the remarkable qualities of Edmund as director was that he knew the names of everyone working in the building and the more lowly your position the more genuine he was interested in you."

During a random stroll in the gallery, Capon came upon him and said:  "You know you have not moved too far away from where you have been.  Working at the gallery this is not a job, this is a vocation. We are like those great abbeys in the past Cluny or Monte Cassino, we are keeping culture alive, nourishing people, their minds, their spirits."

Capon pointed to the NSW Parliament: "Those f—wits over there mightn't realise it but we are keeping the country alive, genuinely alive."

Artist Tim Storrier saw Capon in Chelsea in November before his March death. His face was slightly puffed with the cancer treatment and he professed a wish to return to Australia.

"I always felt there was something Kipling-esque about Edmund, a sort of subtle roguish quality, Flashman in a way."

Before leaving for London last year, Miller recorded an interview with Capon, one of a series that was to span Capon's 33 years as director, a project cut short by Capon's death in March from melanoma. Excerpts were played during the night. And ice cream magnums, Capon's secret indulgence along with cigars, were handed out to departing guests.