Home » Lifestyle » Who Is Hosting ‘The Bachelorette’ With Katie Thurston In 2021? Meet The New Co-Hosts

Who Is Hosting ‘The Bachelorette’ With Katie Thurston In 2021? Meet The New Co-Hosts

All the buzz is about the new Bachelorette and another drama-filled season of reality television. Katie Thurston is more than ready to embark on her journey to find love. She may be all about the good vibes, but her season has already had unprecedented drama. This time, the shakeups started before filming and included the longtime host.

ICYMI after Matt James’ season of The Bachelor, Chris Harrison stepped away from his hosting duties. During his controversial Extra interview, Chris defended Bachelor contestant Rachael Kirkconnell, who was under fire for racially insensitive photos and racist behavior from her not-so-distant college days. Fans and contestants alike were furious and frustrated with how Chris handled the situation.

Chris’ absence leaves some pretty big shoes to fill and tbd when/if he’ll return. So, ABC found not one, but two former Bachelorettes to step in and announced the switch on Instagram back in March. If you’re a Bachelorette fan, then you’ll recognize this pair pretty quickly.

Without further ado, here’s everything you need to know about who’s hosting The Bachelorette season 17 with Katie Thurston.

Kaitlyn Bristowe and Tayshia Adams will serve as co-hosts for Katie.

Former Bachelorettes Kaitlyn Bristowe and Tayshia Adams “will support the new Bachelorette through next season,” according to ABC. They’ll be available to Katie as mentors. You can also expect them to alert everyone when “this is the final rose tonight,” natch.

Kaitlyn shared on Bachelor Happy Hour podcast: it “was really nice to be there as a mentor and support system… I think people will really enjoy this little—I don’t know how to explain it—a refresh of being the support system of having two women there.” 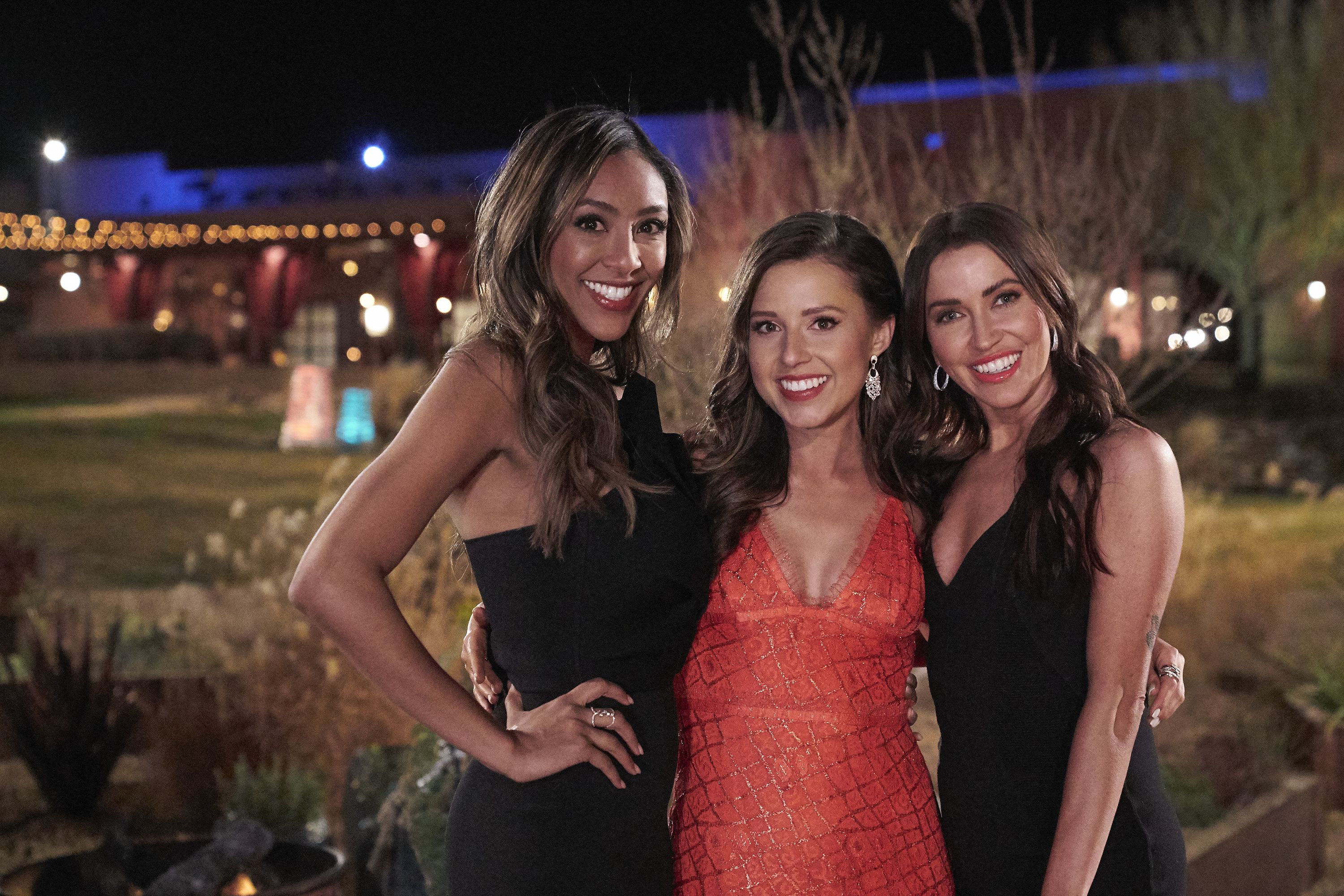 Kaitlyn clarified some specifics on IG: “Truthfully we are there to support the new bachelorette, We aren’t ‘replacing’ anyone!!!”

And Tayshia is on good terms with Chris. “I’ve been getting so many phenomenal messages and words of encouragement; it means so much,” she shared on Instagram stories. “And the fact that I talked to Chris the other day and he was so kind and congratulated me for being part of the next season meant the absolute world.”

They helped Katie through it all from night one to the final rose.

Tayshia and Kaitlyn became more than co-hosts, too. “They were there for me from start to finish, and [it] really became like a sisterhood,” Katie told Women’s Health. “They were there to talk about fantasy suites, but they were also there to wipe my tears when I was struggling. It was just so great to have women supporting women, but also women who’ve gone through this before who can really offer valuable advice.”

Third time was the charm for Tayshia. She got engaged to contestant Zac Clark at the end of her season, and they’re still together and looking all kinds of adorable on the ‘gram.

Oh, and she’s super excited to be a part of Katie’s season! “Trading in the crown and dress, but don’t stress…. so excited to spend another season with you all,” she captioned a recent Instagram post. “See you on your television screen this summer! And you thought you could get rid of me✨😉 #thebachelorette.”

Fans were thrilled to hear Tayshia’s news. “Change is good, and Tayshia has such an awesome personality!” one user commented. “Excited for her to rock this season!! Congrats, Tayshia! ❤️” added another.

Kaitlyn is no stranger to the series, either.

Kaitlyn started as a contestant on The Bachelor with Chris Soules. Then, she became the eleventh Bachelorette back in 2015 and got engaged to Shawn Booth in the finale. Sadly, they broke off their engagement three years later, per People. But, she’s back and better than ever with her new fiancè, Jason Tartick, who made it to the final round of Becca Kufrin’s Bachelorette season in 2018.

The pair met on Kaitlyn’s podcast, Off the Vine, per People, and are currently in the process of planning their wedding. BTW, Kaitlyn also won a mirrorball trophy competing on Dancing With The Stars in between all of that, so she’s multi-talented.

It’s safe to say these ladies have tons of experience to help Katie on her journey to find love this season—sounds like a recipe for success to me!