A fire in near Schroder Road in the Nemo area, about 15 miles northwest of Rapid City, had burned about three square miles late Monday night, reports CBS Sioux Falls affiliate KELO-TV. At least two homes and several outbuildings have been destroyed, officials said.

South Dakota Gov. Kristi Noem, who traveled to Rapid City to oversee the response, said the Schroder fire started on private property. She said “there have been losses and that is tragic.” No injuries have been reported. 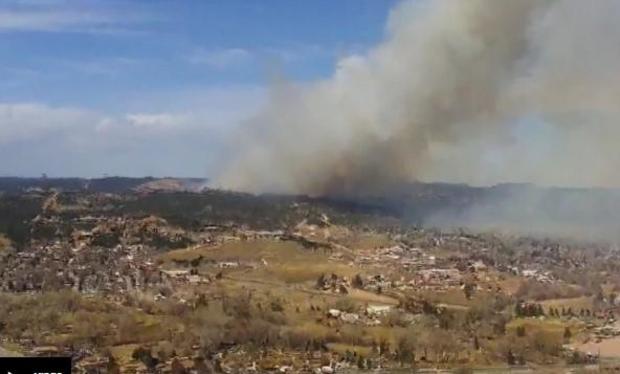 The Sheriff’s Department warned earlier that it was a “very active and dangerous scene.” About 250 firefighters were battling the flames on a windy afternoon when gusts ranged from around 50 mph to 72 mph, the Rapid City Journal reported.

Two additional blazes were burning, southwest of Rapid City, near Keystone, with one covering an estimated 75 acres and the other 20 acres. That caused Mount Rushmore National Memorial to close through at least Wednesday, as well as nearby roads.

South Dakota transportation officials shut down a 42-mile stretch of Interstate 90 from Kadoka to Murdo for three hours due to grass fires.