A woman who refused to bake a cake for a colleague she barely knows has revealed how the disgruntled birthday girl threatened to report her to HR when she didn’t come up with the goods.

The unnamed woman, living in Tokyo, shared a text exchange between them on Reddit, revealing her co-worker’s outrageous demands.

It started when her colleague sent her a message, saying: ‘I heard from [redacted] that you baked a cake for your team on his birthday.

‘It’s my birthday next week, can you bake me a cake and bring it to the office? It’s free, right.’

She sent a snap of an elaborate chocolate cake topped with Ferrero Rocher and Lindt balls, and when the baker politely declined, she was warned to ‘watch your back’.

Reddit users were outraged by the demanding birthday girl, and couldn’t believe her nerve. 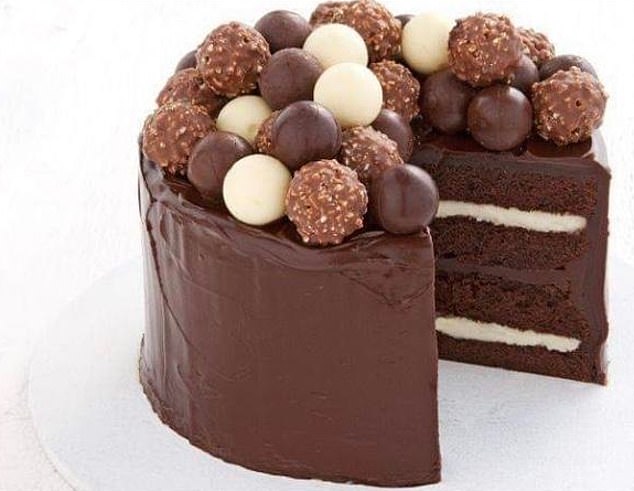 A woman working in Tokyo got seriously enraged when her coworker refused to bake her this elaborate chocolate cake, topped with Ferrero Rochers and Lindt balls

At the start of the conversation, the baker explained she’d made a cake because her team either pools money or someone volunteers to make one at home.

‘Are you sure you want me to bake it?’ she asked. ‘I’ve never spoken to anyone on your side of the office and I don’t know if it would make any sense if I came to give it to you and your team.’

But the sweet-toothed colleague was not put off, and replied: ‘I was gonna buy a cake to but its free to ask you to make it, so…’

‘Can you do this cake, on Monday, bring it to my desk at two and I’ll just give it to everyone  so it’s not awkward for you to talk to my people,’ she replied. 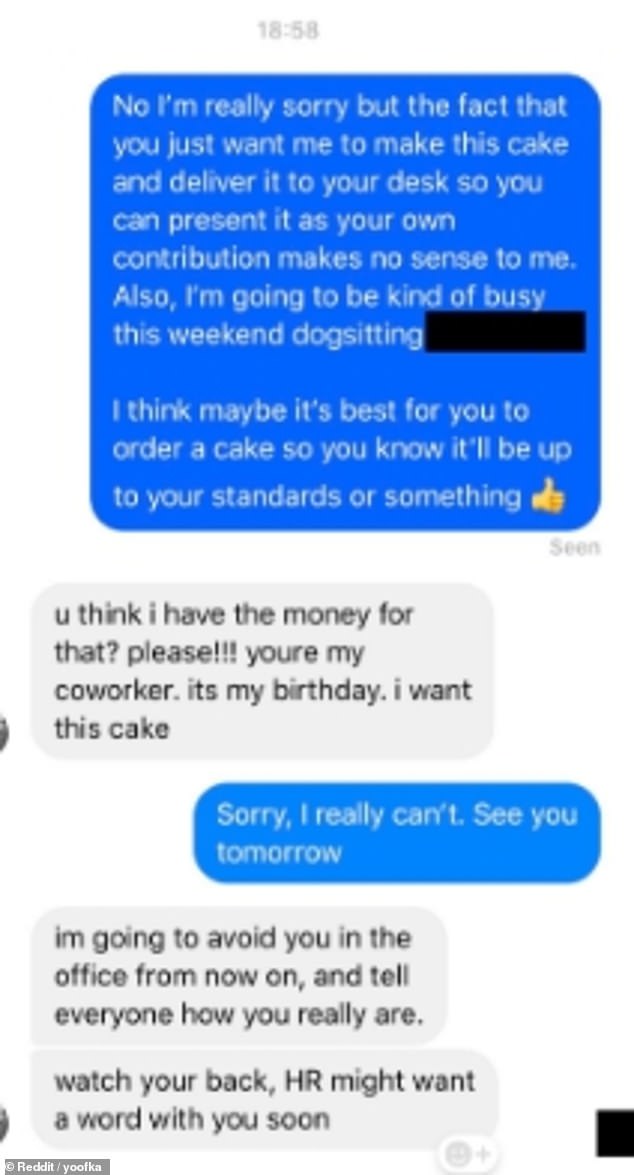 At the end of the exchange and after the coworker refused repeatedly to bake the cake, the disgruntled birthday girl told her to ‘watch her back’

‘It’s Ferrero Rocher and Lindt truffles and stuff but you can just count the cost as my birthday gift, lol’ the woman added.

When she turned down an offer of getting cookies instead, the baker eventually ran out of patience and said she wouldn’t be making anything.

‘No, I’m really sorry but the fact you just want me to bake a cake and deliver it to your desk so you can present it as your own contribution makes no sense to me,’ she said. ‘Also I’m going to be kind of busy this weekend dogsitting.

‘I think it’s best for you to order a cake so you’ll know it’s up to your standard or something.’

This did not sit well with the birthday-girl, who wrote she did not have the money to order a cake.

She added: ‘It’s my birthday, you’re my coworker, I want this cake.’

When she was met with another refusal, she replied: ‘I’m going to avoid you in the office from now on, and tell everyone who you really are,’ and finally added, ‘watch your back, HR might want a word with you soon.’

It wasn’t long before the Reddit users commented on the situation, calling the birthday-girl out for her ridiculous behaviour.

‘I was gonna buy the cake but you’ll make it for free and I’ll pretend I made it so it’s not awkward. Seems reasonable to me,’ commented a dubious user.

‘I’m sure HR will totally love the fact that this POS tried to blackmail you in baking a cake. The pettiness and stupidity of some people never ceases to astound the **** out of me,’ wrote one.

Other users advised the baker to report the interaction to HR herself, to avoid any surprises further down the line.

‘My guess is she’d report someone for something else unrelated to the cake, so it’s great that they have written evidence of her saying she’ll do this, because otherwise it may actually be taken seriously by HR.’

‘That’s why you need to share this text with HR,’ another wrote, ‘Coworker could be fired over it.

‘But at the very least this will be documented with HR if they try some nonsense later.’