A mother has been encouraged to divorce her unemployed husband after he invited his friends to the house for a pool party after she specifically asked him not to.

The mother, believed to be from the US, posted on Reddit’s Am I the A**hole forum to say she had kicked her husband and his friends out of the pool.

She explained her husband had agreed to let their children play in the pool for the afternoon but broke his promise and invited his friends over instead.

After her daughter called her in tears to explain what had happened, the mother said she returned home from work and made her husband’s friends leave. 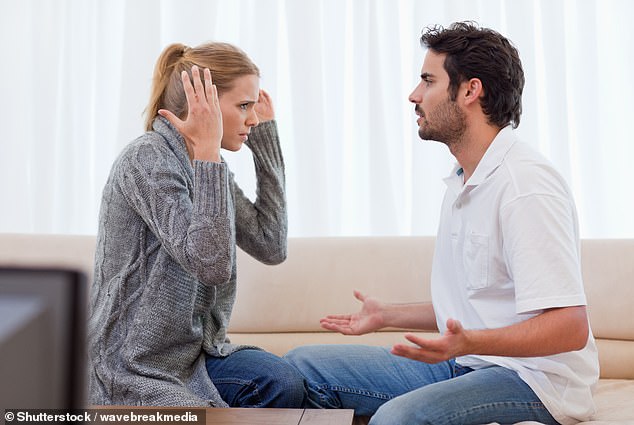 A mother has been encouraged to divorce her unemployed husband after he invited his friends to the house for a pool party after she specifically asked him not to. Stock image

When her husband called her ‘controlling’, she took to the forum to ask others if she had been unreasonable – and received a lot of support.

The mother wrote: ‘My husband has been struggling to find a job for 16 months… so I’ve been solely paying for everything.’

She added as the summer months approached she put money towards renovating the pool in the back garden for the children.

‘Thing is once the pool was ready my husband started inviting his friends to come over and use it for hours,’ she wrote.

‘They’d basically taken over, preventing the kids from enjoying it. They complained about being denied the pool several times which caused them to get upset.’ 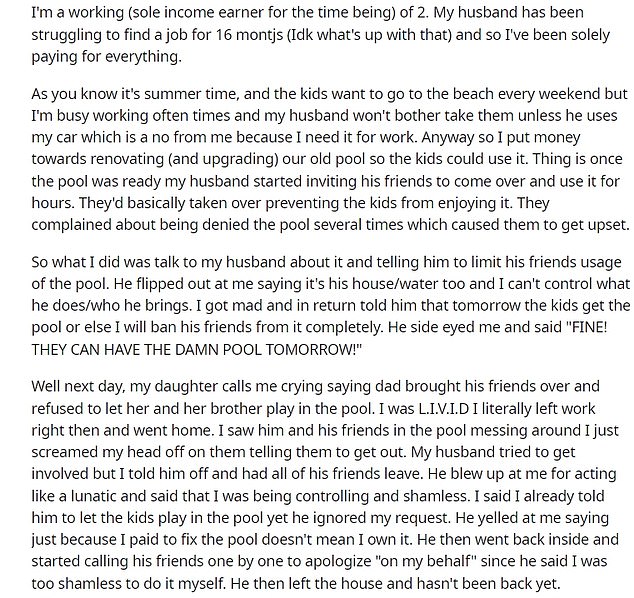 The mother, believed to be from the US, posted on Reddit’s Am I the A**hole forum to say she had kicked her husband and his friends out of the pool

The mother explained she had tried to talk to her husband about his use of the pool but he ‘flipped out’ and argued he should be able to use it whenever he wanted.

In response, the mother made her husband promise the children could spend the next day playing in the pool and warned she would ban his friends from coming over indefinitely if he didn’t comply.

The following day, her daughter called her in tears because her father had invited his friends over once again and refused to let the children play in the pool.

After a mother wrote on the Reddit forum describing her argument with her husband when he hogged the family swimming pool, other people encouraged her to leave him

She wrote: ‘I literally left work right then and went home. I saw him and his friends in the pool messing around I just screamed my head off on them telling them to get out.

‘My husband tried to get involved but I told him off and had all of his friends leave. He blew up at me for acting like a lunatic and said that I was being controlling and shameless.’

The mother added her husband called his friends to apologize for his wife’s behavior and stormed out of the house.

After asking for others’ opinions on who is in the right, other posters took to the forum to say they agreed with the mother – and even suggested she divorce her husband.

One person said: ‘I’d be looking at divorce lawyers over this.

‘What, if anything, does this man bring to a marriage that would make this relationship worth saving?’

Another poster encouraged her to change the locks before her husband returned home.

They asked: ‘I get that you have children with this man but if he’s not contributing finically, emotionally or supportively why are you keeping him around?’

One person argued her husband would be in his rights to use the pool with his friends from time to time, but that he should be trying harder to find a job after 16 months out of work.

They added: ‘He’s being an awful dad too by hogging the family pool (which sounds like he barely contributed anything towards) so the kids are literally crying for not being able to use.’

Many people made the point the original poster’s husband sounded like a child himself.

One wrote: ‘He doesn’t sound like a father or even an adult. He sounds like he is one of her kids, an annoying teenager hogging the pool and bringing his friends over, who trash the place and don’t clean up after themselves.’

Another person said: ‘I’m just so confused why he can’t invite a few decent friends and share the pool with the kids….why does he kick the kids out of the pool?

‘A good dad that had good friends would play games with the kids and all enjoy it together. Also, if he and his friends are in the pool, who is watching the kids? Why does he act like they aren’t his responsibility?’

One person, who was writing from the UK, said they had been in the husband’s position before when they were unemployed and their partner was paying for everything.

However, they did not sympathise with how the woman’s husband was behaving.

They wrote: ‘I didn’t work for four months because I didn’t have the right experience for the jobs available at the time.

‘This meant my boyfriend paid for virtually everything and I felt like such a freeloading a**hole, not to mention the stress of it.

‘So for this guy to be freeloading off of his family, acting like a spoilt child and refusing to work for 16 months, is insane.’