The baseball team, which is in its first season as the Yankees’ Class AA affiliate, was in Maryland on Sept. 2, but water awaited Purner at TD Bank Ballpark. When he arrived at 7:30 a.m., puddles dotted the warning track. If that was the worst of it, he thought, the field would be fine.

But then the floodwaters started seeping in under the right-field fence. Within 15 minutes, the rising tide reached the infield; another 15 minutes later, the muddy water rested in Row G of the stands. Fish swam by the on-deck circle, and the flooding had lifted outfield wall pads off brackets and carried them more than 300 feet to home plate.

Two months’ worth of rain had fallen in one night, and the deluge led the nearby Raritan River to crest. Three people died in Bridgewater during the storm.

When word of the toll reached the players in Bowie, Md., Manager Julio Mosquera called a meeting at the team’s hotel. At a level of baseball in which the minimum salary was only recently raised to $600 a week for the five-month season, 16 players learned their vehicles sat destroyed in the stadium’s parking lot. Mosquera harped on being resilient.

Bryan Iwicki, the Patriots’ vice president for operations, was the first employee to check the field’s condition. From home, he used an app to access the stadium’s 60 surveillance cameras and to turn on the park’s new LED lights remotely for a clearer view. It was 10:30 on the night of the storm. Because the team was away, only the mound and home plate were covered by tarps. He sent several screen shots as a status update to Purner, but nothing foretold the damage to come. 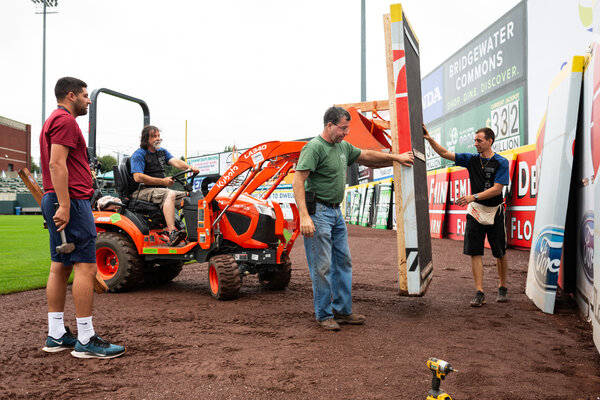 After the field was flooded, the team responded cautiously. At first, Iwicki was hesitant to turn on the scoreboard, but when he did, it lit up. The team returned home Sunday. While the clubhouses were unaffected, carpets in the batting cage needed to be ripped up, and an auxiliary locker room had been damaged. Televisions, computers and refrigerators were wrecked. Players returned again Monday, the regular off day in the Northeast League, to air out soaked gear — golf bags, clothes and sneakers — on any patch of dry grass they could find. Some of it lay flat atop the dugout roof.

The Hartford Yard Goats offered the Patriots shelter in Connecticut, where they played two relocated home games as Purner tended to the saturated field. Between late Friday and early Saturday, Patriots officials decided to return to hosting games as soon as possible. It took two days for the waters to fully recede. By Sunday, they had mowed the field. By Monday, the pitching mound was playable again. On Tuesday, President Biden toured a devastated neighborhood in Manville, two miles from the stadium, and the team announced that it would be able to host the weekend’s series against Hartford.

Purner, 37, typically keeps a low profile — and his grass at one and a sixteenth inches. He started mowing lawns in Morris County when he was a teenager, learned to fix fences on a horse farm and studied landscape management and design at County College of Morris before graduating from Rutgers with a degree in plant science.

During college, he interned with the Patriots when they were in the Atlantic League. He learned under Ray Cipperly, who was the head groundskeeper in 1999, the organization’s first season, when Hurricane Floyd flooded the stadium. In 2011, Purner took over for Cipperly, and faced his own storm immediately when Hurricane Irene blasted the area. As the water rose in the stadium during Irene, Purner said, he called his mentor and informed him they were battling water again.

Flood mitigation efforts had long been made in and around the stadium. After Hurricane Floyd devastated neighboring Bound Brook’s downtown in 1999, the U.S. Army Corps of Engineers built infrastructure — detention reservoirs, levees and pumping stations — to prevent similar catastrophic flooding.

But those plans faltered around 9:30 p.m. on Sept. 1. In Bound Brook, a floodgate couldn’t open because New Jersey Transit train 5451 had stalled on its track. In Bridgewater, Kevin Finnegan, a special-needs employee who works maintenance at the stadium, was home with his parents when one of the walls in the family’s basement gave way to the storm surge. The water rose to the steps of the second floor, and the family lost both of their vehicles. Their house is uninhabitable.

“It’s insane how destructive it was,” Iwicki said.

Relief followed. Kevin Reese, the player development director for the Yankees, and Nick Avanzato, the franchise’s minor league operations manager, flew up from Tampa, Fla. to walk players and staff through insurance claims, arrange for rental cars and provide financial assistance. A GoFundMe page was started for the Finnegans, and Chuck Hodgdon, owner of Stadium Graphics, drove down from New Hampshire to help piece the outfield wall back together. Interns and executives worked alongside caterers and the construction crew that had already been on site doing renovations.

Everything was power washed, including the grass to ensure mud did not suffocate it. Each seat was hosed down, then hand washed and hosed down a second time. Purner and his crew triple-checked the field to make sure there were no soft spots. One of the last steps was buying new resin bags, which pitchers are allowed to use during games for better grip on sweaty nights, because the regulars were all soaked. Before first pitch on Friday — nine nights after Ida’s visit — Purner returned to his typical laments.

“Some of my mow lines were a little crooked,” he said.

By then, there were few signs that any flooding had occurred, and it was not until the late innings that a musty odor wafted through the stands after the wind changed directions. Before the ninth inning, the public address announcer noted that there would be no fireworks after the game because the launch area was inaccessible in the wake of the storm. Finally, in the bottom of the 12th inning, outfielder Michael Beltre sliced a double the opposite way to left-center field to drive in the winning run, and his Patriots teammates sprinted from the home dugout to mob him near second base. Three players carried separate coolers and doused Beltre, and the field, with ice water.

The field had little time to recover as the Patriots swept a doubleheader the next day, and Hayden Wesneski, a 6-foot-3 right-hander, struck out 14 batters and allowed only one hit in a seven-inning complete game. He considered the turnaround “absolutely crazy.” His waterlogged Ford F-150 with Texas license plates was still in the parking lot, and there was a flier that a tow company had left on the windshield, which was covered with condensation.

“We buy all cars for cash,” the company's not said above its phone number. “No title or title, we also pay more then insurance on the buy back prices.”

Wesneski had planned on driving back to Houston at season’s end, but now he isn’t the only one whose travel plans were in flux. Outside the stadium, in the parking lot beyond the center-field fence, yellow caution tape kept fans from entering Bridgewater Station on New Jersey Transit’s Raritan Valley Line. Train whistles alerted pedestrians to coming locomotives, but the conductors all bypassed the station because it remained flooded with more than 12 feet of water.

Dan Delsontro, 59, attended the game, and as he readied to get in his car, he saw that a disabled blue Tesla still had its hood up and bore mud streaks. Delsontro eyed the standing water that was blocked off by sandbags; carp swam up. A Bridgewater policeman pulled up in his SUV and trained a light on the displaced fish.

“I guess they have no way out,” Delsontro said.