Home » Sport » A former Real Madrid star once considered among the best soccer players in the world has re-signed for his boyhood club, and will earn just $260 per month

A former Real Madrid star once considered among the best soccer players in the world has re-signed for his boyhood club, and will earn just $260 per month 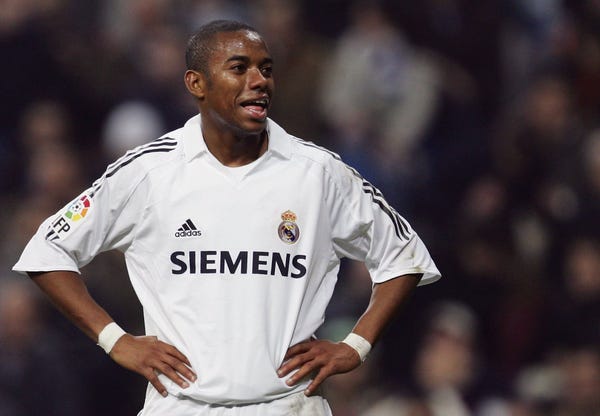 In 2005, a 21-year-old Robinho left Santos to join forces with Zinedine Zidane, Ronaldo Nazario, and David Beckham at Real Madrid.

On Saturday, the Brazilian, now 36, re-signed for his boyhood club, putting pen to paper on a contract that will reportedly see him earn just $260 per month.

Once considered among the best soccer players in the world, Robinho set the Santiago Bernabeu alight during his three year spell in the Spanish capital, however his career went quickly downhill after a $50 million move to Manchester City in 2008.

Failing to live up to his $208,000 per week wage packet, the Brazilian lasted just over a year at The Etihad, before seeing out the remainder of his career in lackluster spells in Brazil, Italy, China, and Turkey.

In November 2017, he was convicted of sexual assault in the January 2013 assault of a 22-year-old woman at a Milan nightclub.

He was sentenced to nine years in prison, however, according to ESPN, the ruling is on hold until the completion of an appeal.

Santos announced Robinho's return in a tweet, branding the move "The Last Pedal" — a reference to his trademark ball skill and the Netflix series about Michael Jordan's final year with the Chicago Bulls, "The Last Dance."

"Robinho is back!" the club said. "The eternal Stepover King has signed a five-month contract and agreed his return to start his fourth spell at Santos."

The forward will be paid a monthly salary of only 1,500 Brazilian reals ($260), reports The Sun, however his basic wage is expected to be topped up with bonuses if he makes enough appearances.

"This was always my home," said Robinho. "My aim is to help on and off the pitch and help Santos FC return to the summit they should never have left.

"It's a marvelous feeling being back at the club where I made my name. I grew up here. I always dreamed of being a footballer and Santos FC made this possible."

END_OF_DOCUMENT_TOKEN_TO_BE_REPLACED

END_OF_DOCUMENT_TOKEN_TO_BE_REPLACED
Recent Posts
We and our partners use cookies on this site to improve our service, perform analytics, personalize advertising, measure advertising performance, and remember website preferences.Ok