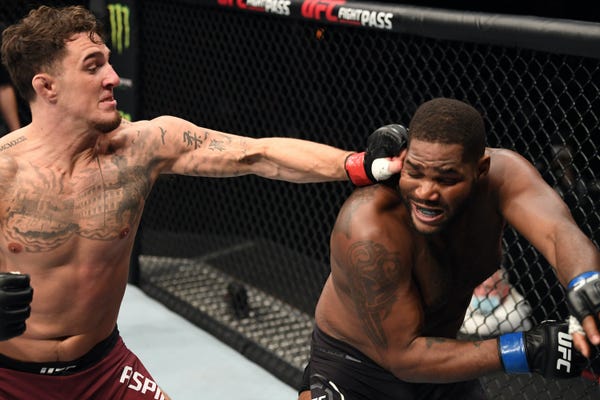 A heavy-hitting heavyweight destroyed his UFC opponent in 95 seconds, but looked moody and annoyed after the win.

Tom Aspinall, one of the UFC's 2020 recruits, cultivated a reputation as a feared knockout puncher in Britain, returning stoppage wins in BAMMA and Cage Warriors.

Aspinall took "Fight Island" by storm in July when he bulldozed through his opponent, winning by knockout in 45 seconds.

On Saturday, he followed that victory with another dominant performance in the same Flash Forum venue on Yas Island, Abu Dhabi, during a "UFC Fight Island 5" match against Alan Baudot.

Taking control of the middle of the Octagon and evading Baudot's introductory attacks — a jab, hook, and spinning back-fist — before easing into his own strikes like a counter punch, a textbook one-two combination, and then, with the distance-closed, powerful shorts from close-range.

On the canvas, Aspinall smothered Baudot, leaned on him, sent his elbow tip into his opponent's face, then rained punch after punch onto his largely-defenseless opponent.

It was all over.

Most fighters would celebrate such an occasion. It was Aspinall's second consecutive first-round finish since signing with the UFC, after all.

But not this Brit.

Aspinall looked frustrated as he prowled around the Octagon without even a smile, while Baudot lay defeated on the mat.

END_OF_DOCUMENT_TOKEN_TO_BE_REPLACED

Obama rips into Trump as 'jealous of COVID's media coverage'

Obama says Trump is ‘jealous of COVID’s media coverage’ as he stumps in Florida for Biden – while President rages in real-time on Twitter at Fox News for showing the speech Former President Barack Obama headlined a campaign stop Tuesday in Orlando, Florida for the Democratic ticket, Joe Biden and

END_OF_DOCUMENT_TOKEN_TO_BE_REPLACED

END_OF_DOCUMENT_TOKEN_TO_BE_REPLACED
Recent Posts
We and our partners use cookies on this site to improve our service, perform analytics, personalize advertising, measure advertising performance, and remember website preferences.Ok