A Push for Cyclists Safety After 5 Die Near Las Vegas

LAS VEGAS — Cycling activists in the fast-growing Las Vegas metropolitan area placed the first “ghost bike” at the scene of a fatal accident in 2016 to denounce and mourn the loss of one of their brethren.

They had seen too many accomplished bicyclists who were obeying the law cut down by frustrated or distracted motorists. As a call to action, they have erected a half-dozen of these memorials — stripped-down working bicycles painted a ghostly shade of white — in the last four years.

The bikes were also a message to Nevada lawmakers: Do something about the carnage.

“The response we got to the cyclist deaths was like what you get after a mass shooting,” said Pat Treichel, a founder of the group Ghost Bikes Las Vegas. “People offered thoughts and prayers. And then nothing happened.”

Now, Treichel believes that both lawmakers and the general public are willing to take more action to protect bicyclists on Nevada’s roads. But it took a tragedy to galvanize them.

Five cyclists were killed on a rural stretch of highway just south of Las Vegas last month when the driver of a box truck struck a group of 14 bicyclists who were taking part in an annual 130-mile ride escorted by a safety vehicle with flashers.

The driver, Jordan Alexander Barson, 45, of nearby Kingman, Ariz., told investigators that he had fallen asleep at the wheel moments before the crash, on Dec. 10. He was found to have a high level of methamphetamine in his system and faces 12 felony charges, including driving under the influence and reckless driving.

Days after the tragedy, activists staged a memorial service outside a local bike shop, with a large ghost bike statue, and there are signs the accident has touched a nerve within and beyond Nevada.

Ghost Bikes Las Vegas has been contacted by Lance Armstrong and the Vegas Golden Knights of the N.H.L. Groups representing pedestrians, runners and motorcycle riders called to ask how they could work together on safety legislation.

“This time, the reaction started from Day 1,” said Treichel, 59, an executive at a local electrical contracting company who knew all five of the victims. “Now the governor is even taking our calls. This one definitely feels different.”

A coalition is seeking to persuade lawmakers to toughen penalties for motorists who injure or kill bicyclists, making such offenses a felony with required jail time of up to one year.

In 2017, a similar bill failed to pass the legislature but cycling activists say that, in light of last month’s tragedy, they have sponsors for a new bill. This time, they want to add a “presumed liability” clause that shifts the burden of proof in any incident from the cyclist to the motorist. 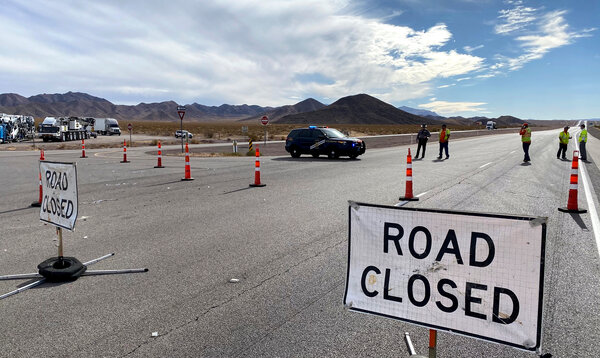 “Right now, the law is on the side of the motorists,” Treichel said. “Defense lawyers say cyclists share the blame, that they knew the risks when they went out there.”

Activists are also meeting this month with Nevada Department of Transportation officials to improve bike safety.

Many Las Vegas cyclists believe their city is more treacherous than most, with its 24-hour drinking and tourists from around the world renting cars and taking to the road. “Vegas is booming, roads are under repair,” said Rob Hutchinson, owner of Hutch’s Bicycle Garage. “The Nevada state flower is the orange construction cone.”

Treichel said many motorists are also unaware that state law allows cyclists to share the road. “Many drivers who spot a cyclist in their lane are fit to be tied,” he said.

Two years ago, Hutchinson was out for a 4 a.m. solo ride, with flashing lights and reflective gear, when he was struck from behind by a motorist who fled the scene, leaving him with multiple cuts and a broken helmet. For months, he refused to ride alone and flinched as vehicles passed.

In 2015, Las Vegas was rated the nation’s third most-dangerous city for bicyclists, with 6.4 cyclist fatalities per million people, behind only Albuquerque, N.M., and Tucson, Ariz., according to the National Highway Traffic Safety Administration.

In 2019, more than one-quarter of Nevada’s traffic fatalities involved pedestrians and bicyclists. Last year, the number of biking fatalities statewide rose by more than 50 percent, to 11 from seven, including the five killed in December, according to the Nevada Office of Traffic Safety. The remainder died after they were struck from behind by motorists.

Activists have made some headway in enacting laws to protest cyclists.

In 2011, Nevada passed a Vulnerable User Law, better known as the “Three Feet Rule,” requiring motorists to surrender more space — an entire lane, if possible — to cyclists, with penalties that include fines and loss of license.

Two years later, after the pro cyclist Pete Makowski was killed after being struck from behind by a gravel truck while on a rural training ride, activists began a “Three Feet for Pete” campaign in his honor to help publicize the new law.

“There’s a much broader picture here,” said Justin Jones, a commissioner in Clark County, which includes Las Vegas, and an avid cyclist who keeps a Ghost Bike in his office to stress bicycling safety. “It’s not just increasing penalties. Going to jail for longer periods for killing a cyclist isn’t necessarily going to help the next bicyclist on the road. But more education might.”

Heather Fisher, a local bike shop owner and the president of the Save Red Rock preservation group, has called for a statewide campaign similar to the one against using cellular phones while driving.

Many state motorists, she said, are still unaware of the decade-old three-feet law. “Las Vegas has a chance to become a role model rather than the site of a blood bath,” she said. “We have an opportunity to be in the national spotlight in how we react to the recent deaths of these five cyclists.”

Progress is being made. Traffic officials are working on a link of bike trails across Las Vegas, including an off road trail so cyclists won’t have to compete with vehicular traffic near scenic Red Rock National Park, a popular cycling destination.

And just days before the new year, state and local law enforcement agencies conducted a sting on a busy thoroughfare near the Las Vegas Strip. Nearly 200 motorists were cited after coming too close to a bike-riding undercover officer, who used an electronic device that measured the distance between each car and the bike.

Meanwhile, the cycling community has reached out to support the victims of last month’s crash, starting a funding site and circulating fliers in the hopes of raising $1 million for the families of the five dead and four injured people.

Volunteers plan to eventually place five ghost bikes at the scene of the crash, a lonely expanse that’s home to the endangered desert tortoise. “This isn’t just about avid cyclists,” Treichel said. “Some parents will no longer let their children ride bikes around the neighborhood or to the convenience store. Kids should not miss out on that.”

Cheri Tillman, who owns the Pro Cyclery bike shop in Las Vegas with her husband, Mike, has observed a greater sense of driver courtesy on the road following the tragedy.

“Whether that continues, nobody knows,” she said. “The jury is still out on how this accident will affect bicyclists. We have had some people who say they’re never riding a bike on the road again, and others who are more militant, saying nobody can make them give up the road.”

Tillman was herself forced to give up the road in 2018 after a cycling mishap left her unconscious for five days. That’s when her husband laid down the law.

“It was between him and our seven kids,” she said. “He told me, ‘Next time the hospital calls, I’m not answering.’ Then he bought me a nice indoor exercise bike.”

END_OF_DOCUMENT_TOKEN_TO_BE_REPLACED

END_OF_DOCUMENT_TOKEN_TO_BE_REPLACED
Recent Posts
We and our partners use cookies on this site to improve our service, perform analytics, personalize advertising, measure advertising performance, and remember website preferences.Ok